October 23, 2017
How is it that after someone you love dies, time moves on even when it feel like its standing still?
Philosophers, poets and writers have tried to answer that question since time began. I don't have the answer. I just know that, by what I can only imagine is the Grace of God, it does. When you heart is broken into something resembling a 1000 piece jig saw puzzle and there are no directions on how to put it together, somehow it mends. When some else dies and it cracks again, God stitches the old wound and the new wound together into a patchwork of healed scars.

Fifteen years ago, when I watched my mother draw a breath then counted the seconds before she took another but none came, I sat by her bed and tried to imagine being a motherless child. Then I did what any kid would do, ran down the long hospital corridor sounding the alarm.

Want to see doctors, nurses, CNAs, and cleaning ladies turn white then spring into action? Try shouting "my mother isn't breathing" in a cardiac ward and see what happens. Actually, I don't advise that.  In fact, it is the one thing I still regret about my mother's passing. That I didn't sit quietly with her and feel what was happening. I didn't stay long enough to wash her wrinkled body and tenderly hand her over to the men who would cart her away in a black zippered bag. Instead I slipped her wedding rings off her finger, listened as the doctor pronounced her deceased in a much more dignified way than I had, and went home to be with my father who had been talked into leaving the hospital by a gaggle of concerned daughters and grandchildren. We thought he needed to rest. I know now he was the one who needed to sit by his wife of 60+ years, not me. That's not to say it wasn't one of the most meaningful moments in my life.

The last line of the poem After A While (byVeronica A. Shoffstall) reads, "with every goodbye you learn." After my mother's passing fifteen years ago I did learn to say goodbye is a gentler, quieter way. I've said goodbye to my son-in-law, my father, my aunt, my uncle, and several friends. I now know there is no reason to rush. While dying is forever, life continues.  Taking how ever much time you need with a person is an important part of the eastering effect of grieving. Even if you are not religious, or believe in a Holy Resurrection watch how Mother Nature does it.  Orange and yellow leaves that once were green with life, wither and let go in Autumn. Winter is a time to rest and reflect on memories of things past. In the Spring, despite El Ninos and global warming, dogwoods blossom, tulips stick their pointy heads out from under the snow, and God repaints the earth with every shade of green you can imagine. Even when you think winter will never end, it does. So it is with grieving.

In the years since my mother died, I've moved through the proverbial stages of grief. I've read books, said prayers, cried like a baby, and shared joyful memories. Yes, joyful. I smile when I see a photo of mom in a black crepe dress serving up the first Thanksgiving dinner in her new home, or make nuts and bolts for a family reunion, or curl up under a quilt made from her favorite shirts, or make the bed (which I've never been able to do as well as she did), or catch a whiff of 4711 perfume (which is a very rare occurrence), or hear that the Jags won a game, or wear her gold beads, or hold her newest great grandson.  And it might sound weird, but every time I use a certain kitchen spatula with a burn mark on the handle worn smooth from use, to slather mayonnaise on a sandwhich, I remember my mother as she used to be, not as she was the last time I saw her.  In my book, that's an Easter miracle.

I miss you Mama,
Merry ME

Popular posts from this blog 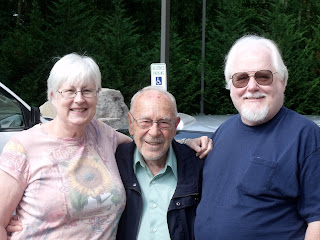 It's hard to believe that just a week ago I was whining about being a boogerhead. What a difference 7 days and 500 miles can make! Not saying my boogerhead persona doesn't lie dormant waiting for an opportunity to whine. I'm just saying that the change of pace and scenery, not to mention a cleansing downpour, new connections and reconnections were just what the doctor ordered. Note to self: When you're feeling boogery, don't just sit there - get moving. me The last part of our stay in Tennessee was very similar to the first part - eating and visiting. We hooked up with Pastor Maurice Hall for breakfast.  Jack found him dressed and sitting in the motel lobby at 5:30 am when Suzi went out for a morning toilette.  I get antsy just thinking about waiting for 4 hours to pass, but I think Pastor Hall probably lost himself in prayer and meditation and memory. That Maurice is a man of God was evident from the start, but we soon learned he is much more than that. Sweeti
Read more

August 16, 2016
"The life of the dead is placed in the memory of the living." Marcus Tullius Cicero It's happened again. Someone I know died. While Michael Phelps racked up an unprecedented number of medals and Simone Biles vaulted her way into gymnastic history books, my daughter's father-in-law drew his lasts breath.  I know, I know. People die every minute every day. People die in numbers too great to comprehend. Dying is part of the circle of life. It's when the circle narrows to include someone you know or love that death is no longer something that only happens to someone else. A few weeks ago, my uncle went in for back surgery.  A man so full of life, it never occurred to him or any of us that something could go wrong - horribly wrong.  Complications that had nothing to do with his back sent him into another 4 hours of surgery from which he did not recover. And just like that, the once robust man, my mother's youngest brother, the end of a generation, died. No
Read more