I've heard people say they don't like cats. I've even met a few. Mostly those people are men who think of felines as some kind of fru-fru girly thing, obviously never getting the cat/human connection. I don't think I could ever really trust or like a person who professed a disdain for soft furry things that meow and purr and walk circles around your ankles at dinner time.
This has been a tough month for cats in our family. First of all Oliver, Shannon's friend and understanding partner, had to be euthanised. A big and kind of icky word for one of the hardest things a person can do. Next, Wendy's Lou Pucci took a nose dive out of his window perch several stories above the ground, but thankfully not so far from the balcony below that he couldn't land on all 4 feet - albeit, a rough landing. There have been Lou sightings since his Flying Wallenda escape. I still believe, he's smart enough to know a good thing when he had it. It might take awhile, but I bet Lou shows up at someone's doorstep, and when the door opens and the greeter says something like, "oh look, a little kitty cat," he'll walk right in, tail held high, and act like he'd just been out for a Sunday stroll. That's the way of cats, they don't like to admit mistakes like falling out of a window, anymore than a human.

Today, my sweetie, Jack, decided it was time to say goodbye to his travel partner, watch cat, confidant, sleeping buddy and best furry friend. In the past few months Caht had lost enough weight (a mere 6 pounds - down from a fighting weight of 22) and muscle mass that he bar 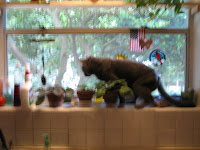 ely resembled his old self. One might wonder why the fateful decision hadn't been made weeks ago. His thyroid condition took its toll on Caht's body, and we were pretty sure he could no longer hear. But he still ate, peed, and pooped with regularity. He could also attack a chicken bone with youthful zeal. The cat also had the unique ability to find something green to nibble on, even if he knew it was going to make him throw-up. (Okay, I admit, the throwing up and yoga-style cleaning of one's private parts are not the best of a cat's loving characteristics.)

There were signs, however, that things had changed. He could no longer hold his tale in a dignified up postition. One of our new kitties walked up to him this morning,

actually got nose to nose, and instead of letting loose one of his stored up prehistoric sabertooth growls to let her know who was who, he stood there, let her smell then walked off. I think I saw him shrug his shoulders as if to say, "kids... no respect!" Even one of Caht's favorite treats, a handful of cosmiccatnip, no longer interested him. Let's face it, he was old and tired. His days were all about eating and finding a comfortable place to sleep. (The resemblance to my father's daily actions, is not lost on me.)
The first time I met Caht, he wasn't exactly in his prime, but he was still a feisty thing. He was perched in the windshield of Jack's motorhome. This was his Watch Cat guard post during the day while Jack was gone. As soon as Jack would drive up, he'd spring into action and the two would greet each other at the front door. It's still a question in my mind whether Caht considered this a changing of the guard, or if he thought this would be his chance to make quick get away. The cat was nothing if not a Houdini-esque escape artist. If Jack had a guest, i.e. me, Caht's welcome was more of a what-do-you-want-and-how-long-are-you-going-to-be-hear hiss, than a glad-to-meet-you hello. Clearly he was not glad to meet newcomers. He looked forward to his Jack-time and didn't like sharing it with interlopers, i.e. me.

Jack would have to tell the story of how the two met; how they lived, worked and traveled. He's got 17 years of stories to remember and tell. However, I think the one that best describes their relationship was the one where the dominance of the Alpha cat was established:
Jack traveled in a motorhome for a couple of years with Caht as his co-pilot and navigator. On this particular occasion, they had spent a weekend camping at a local beach/park. Caht had a cage he liked to sit in which gave him a sense of being outside yet kept him confined; he knew, however, it was not the same as being free to wonder and sniff and commune with other four-legged creatures. He was always looking for an avenue of escape. His eyes and ears were always tuned into the sound of a door opening but not closing tight.
On this occasion he did escape. And yes he did give Jack the impression that since he was "free at last" he wasn't coming back anytime soon. Herein began the battle of wills - man vs beast, parental knowledge vs teenage smarts, instinct vs sanity. Who was going to win? From Jack's telling, it was a toss-up for about 24 hours. Tired of chasing the frisky feline and angry about having to, Jack made the decision to pack up and get ready to leave. If the cat showed up fine, if he didn't fine. He spoke his plan to the bushes and sand dunes. He rattled the gas tank and pots as he closed up the motorhome getting ready for the homeward voyage. No sign of Caht or evidence that the wayward tomcat (albeit one without the tomcat equipment) even heard the plan.
So Jack slowed his pace a little, made some more noise, reminded the cat (and the surf and sea) who his benefactor was and that life as he'd known it was about to come to an end. It was time for him to choose - sand, prickers, and sea creatures, or a warm, cozy window seat where he could watch the world go by. Not to mention the back scratches, Fancy Feast dinners, and fresh water awaiting inside the "Barge." The engine started. It revved upa little and, with a lump in his throat, Jack was determined to leave with or without a roaming cat.
Now please don't think of Jack as some heartless cat abandoner. The thing about cats is you usually can't force them to do things. You have to present them with choices, and let them think that they have made the final decision. This is standard cat behavior. Jack new this and hoped against all conceivable hope that this cat was going to decide what he(Jack) wanted.
And he did!!! As the motorhome began to move, the cat came out of the bushes where he'd most likely been watching the whole showdown. Like two gunslingers facing off on a dusty western road, this duel was about who was quicker on the draw - the man driving the RV or the cat who waited til just the right moment to shoot his best "I'm a cat, and I do things my way" look at the man and melt his heart once again.
So this morning we said goodbye. The man I love so dearly because he is strong and tender at the same time, made the choice to let his friend go to that beach/park in the sky where he could run and sniff and eat grass without puking. It wasn't an easy choice, it never is. But when we adopt an animal we promise to love them the best we can. Sometimes, hard as it is, letting them go is what's best.
We buried Caht in the back yard. Sitting next to his grave, under a scraggly cactus (another of Jack's adoptees) we cried like a babies. I don't think I could have loved Jack more than at that moment. I've heard of people who have found a special connection with dogs, horses, birds, iguanas, pigs, cows, and even an Orca whale. I've cried too many tears to count over the love of a family pet. Nothing, however, comes quite as close to true love as that of a cat who will jump on your bed, walk across your chest, turn his purr motor on and try to lick your chin, even though he's done so everyday for 17 years and been shooed away. Jack never did learn to like cat breath in his face, yet I'm sure it is the feel of a scratchy cat tongue that he will think of when he closes his eyes tonight. 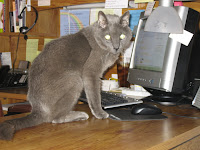 May you rest in Peace, Caht Bear. Run, boy, run! No matter where you go, you'll never be far from our hearts.
Not-so-merry ME

What a beautiful tribute. I met Caht toward the end of his life, but knew he was a special guy from the first story I heard about him. I'm a sucker for a cat and like almost any and all I meet, but there are some super special ones in this world and Caht was definitely one of those (along with Cody, Oliver, Grey Kitty, and Mr. Burns). Giant virtual bear hugs coming your way. Man, this makes me sad. Hope Lou senses this and decides the trap isn't so bad tonight. -w

What a treasure for Jack and Caht to have had 17 years together. So sad that that only makes it harder to say good-bye. I agree that yours was a wonderful and fitting tribute. I especially loved the story of how Caht's bluff was called when he was nearly left behind. My warmest thoughts go out to you. Sounds like Caht's will be a tough act to follow.

As for you, miss Wendell, I fully expect an update the minute Lou Pucci is safely back in your arms. It is agonizing when a furry one goes missing, but it's true they never go far. Write me and tell me what you've tried. I did a lot of research when OC was catnapped last fall...