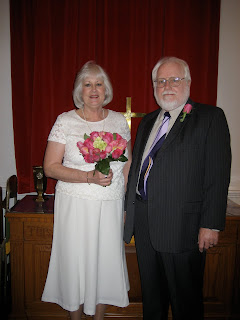 "Marriage is not a noun; it's a verb.
It isn't something you get. It's something you do.
It's the way you love your partner every day."
Barbara De Angelis
I'm not sure where to start so I'll just jump right in. Romeo and Juliet got married yesterday. For those of you who have been following the story you might ask, well why didn't you do that a long time ago. The only answer I can give is that either by Divine orchestration or blind luck, things finally fell into place. Getting married - in the eyes of God - was the right thing to do.
In the midst of all the turmoil of the past weeks, I was given the name of a minister in a small town a couple of hours South of here who would consider marrying us in the church, thus bypassing the state licensing and losing my military insurance benefits. Pastor Prevatt told Sweetie, when it comes to God's law or man's law, he'll go with God every time. It sounded good to us.
It was raining when we got up but it didn't put a damper on our excitement. "Rain is just God's way of showing us things are going to grow," Romeo opined as we headed out of town. It wasn't a hard rain, just a gently shower until we hit the outskirts of Welaka when the sun tried to peep through the dark clouds. I'd say it was a pretty good omen. 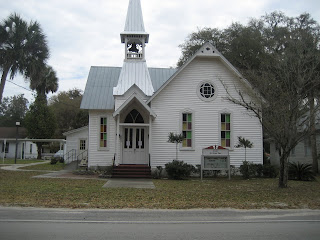 According to it's town website, "Welaka is home to some of the best large-mouth bass fishing in the world." It is not a big town, yet like most Southern bergs, it has a good number of churches. Seven to be exact. Four of them in a row right on main street. Finding the United Methodist Church was not hard to do. There it sat sharing a driveway with the Welaka Bait shop and Dee's House of Beauty. In the style of many river churches, it is a white clapboard number with steeple, the kind you'd expect to see in any small town America.
In typical fashion my husband to be allowed plenty of time to get to the church. We arrived two hours early, just as Pastor Earl was turning the heat on to warm up the sanctuary. He didn't mind getting started early and neither did we.
I donned my wedding clothes in the ladies bathroom, which had not yet had time to warm up. A sure sign that the Welaka Methodist congregation weighs in on the older side was the raised toilet, bracketed by handrails, where I sat to pull on my pantyhose. Once dressed, I added some blush to my cheeks, mascara to my lashes and daubed my lips with a hint of pink. I was set to go.
Pastor Earl's wife Joanne wrote our names on a pretty certificate already signed by herself and Luwanda, the woman who was waiting to clean the church for Wednesday night services. Pastor Earl had hoped that Joanne's son, Sammy, could walk me down the short aisle as his mom played, "On Eagle's Wings" on the piano. As luck would have it, Sammy was dressed for doing chores, not escorting so I wobbled down the aisle by myself. My pink shoes slipping on my heel.
I was vaguely aware of the music, the candles, the witnesses, and my beautiful bouquet to which I held tight. Mostly I kept my eyes on Jack who seemed to be quite pleased. The traditional service was quick and easy. We made the traditional vows, promising to love each other through all kinds of blessings and calamities. Joanne left the piano as we pledged ourselves to each other and became the official photographer snapping pictures right and left.
After we exchanged rings, Pastor Earl served Jack communion who in turn served me. The three of us prayed together which was the pastor's idea of what makes a good marriage. After the final "amen" Joanne suggested Jack kiss his wife and Pastor Earl shushed her til we had time to stand up. I must say it was a sweet, sweet kiss.
After posing for a few more pictures, I changed back into my jeans for a comfortable ride home. Pulling out of the driveway, Jack stopped when he saw Joanne, round and friendly as Mayberry's Aunt Bea, running after us with a store bought angel food cake that was left over from Sunday's social hour. In fact the whole scene could have been something out of another time or southern tv sitcom.
On the way home we stopped for lunch at Angel's diner - the oldest diner in Florida. It reminded me of the old days, driving on two lane highways lined with pine trees, stands selling citrus fruit on the side of the road, and turquoise Howard Johnson's motels advertising salt water taffy and ice cream.
All in all it was a perfectly lovely day. I can't in all honesty say it felt any different to be married in the church as opposed to the kitchen where Jack and I first vowed "till death do us part" over a pot of simmering peas.
Tomorrow we will move back into my father's house. With mixed feelings and raw nerves? To be sure. After daily meetings around the kitchen table, reminiscent of the Paris Peace talks that helped bring about an end to the Vietnam War, Jack and Dad and I have worked out an agreement which will hopefully let us live together in harmony. Like most decisions I make I am filled with scary "what if's". Having taken one leap of faith, however, I think it's getting easier to trust my gut and my heart. We must keep listening to the small still voice that guides us.
Wishing for you dreams that come true,
Merry ME
Posted by Merry ME at 10:15 PM

The church is wonderful. The bouquet gorgeus. The bride resplendent. The groom quietly pleased.

I wish you both the joy of each other every day.

May your official life together be filled with love, light, and abundant blessings. You are beautiful!

Many Beautiful Blessings (((Mary and Jack)))...I left a little something for both of you over on my blog...in Celebration of Your New Life Together.

You Both look so Gorgeous in your Wedding Finery! :)

Let the Wedding Bells Ring Out!

I didn't realize it was your Birthday too! My Goodness!

Here's wishing you a Joy filled year with many abundant and peace-filled moments...

Congratulations to both of you!