Now that the kitchen is done, I am faced with the challenge of cleaning up the things I've been neglecting for awhile. For a girl who really believed she had multi-tasking down pat, I've had a rude awakening of late. It seems I'm barely able to focus on one thing at a time. I chose a new kitchen over washing the car, pulling weeds, dusting, any king of exercise and going to the dentist, so you can imagine I've had a few things to tend to.

Because I've been in a post-whirlwind funk for the last few days, my sweetie offered the suggestion that I'm "project oriented." He thinks I feel at loose ends because I have no project waiting in the wings. Project,of course, means something different to different people. Jack must must not consider dusting quite the same undertaking that I do.
Anyway yesterday, out of the blue, I decided to clean both vans - inside and out. I admit my true motivator was the ghastly odor emanating from some unseen but not unsmellable source. As soon as I opened the tail end of the car, I spied the bottle of milk that had been left behind earlier in the week. There was no mistaking that it had been there for awhile as the plastic was bloated to twice its normal size and the color of the contents was not white like milk should be. Let me just say it for you ... P!U!
Once I began the job I went the whole way. As you can imagine it was way past time to vacuum the floor mats and clean the windows. Normally the seats are a burgundy color, but there was enough dog hair on the back seat to give the burgundy a more mottled look. It felt good to get the Mary-mobile spic and span again. The MacDonald's wrappers have been disposed of and my straw collection neatly arranged in the visor. Ah, life is good.
As for the smell, I have some confidence in the Febreeze commercial propoganda that its "active ingredient, cyclodextrin, will bind the various hydrophobic compounds that cause odors." It remains to be seen, however, which is greater -the smell of putrified milk or the binding power of cyclodextrin. I don't know about you but I'm envisioning a Japanese B-movie kind of battle going on in the back seat. Can't you just see a lizard turned monster, Cyclodextrin, trading blows with an impermeable and stinky, Milkzilla, for the championship of the world? I also read "that although Febreze and other products based on cyclodextrin reduce odors successfully, they are not replacements for actual fresh air." Personally, I believe there are few, if any, replacements for fresh air.
You may be asking yourself, where in the world am I going with all this? Well, I'm trying to get to the place that I can tie in the fact that along with assorted cleaning projects I have neglected for awhile, I have also passed on taking care of a few health issues. Take, for example, having my colon inspected.
I had a friend and coworker for years who was kind of like my guide to, if not adulthood, the glories of middle age. Pam (God rest her soul) was like the poster child for how NOT to take care of yourself. Most of her trips to the hospital in her latter years were brought on from oversight, neglect and just plane orneriness. Because of our closeness and times spent together in an ER (Pam telling the nurses she was going to smoke a cigarette, so they could just wait to take her vital signs, and me combing the halls for unopened servings of jello because Pam was hungry) I got to where I could tell Pam just about anything. As well as a lot of laughs, we shared a few secrets.
It was no secret, however, that if I had my way, no one was ever going to take a look/see into my nether regions. I was pretty adamant about that. Pam promised if the time ever came, she would take me out to a beautiful mountain pasture and put me out of my misery before she'd let some doctor and a sigmoidscope come near me. It was our blood-sealed pact. Alas, Pam has been gone now for 7 years and I've been given the "grow up" speech by the two men I live with. When my gynocologist suggested I was overdue (by five years) for THE test, I gave it enough consideration to discuss it with my Dad's spicey, Latin gastrointerologist.
Now I won't say that Luther enjoys having colonoscopies, but I know for a fact that he doesn't argue when it's time to visit Dr. Corregidor. She wears fishnet stockings and stiletto heels and manages to pull off the look without looking sleazy. Much to my dismay, she reiterated, in her Spanish style (i.e. sounding a little like Ricky Ricardo) the fact that I was years overdue for the exam du jour PLUS I have a family history of rectal polyps. [Thanks, Mary, for sharing!] Just like that, I'd run out of excuses and people willing to shoot me.
So I did it. I hiked up my big girl panties and made an appointment to have a colonoscopy. I laid down a few ground rules -i.e. no way was I going to drink a gallon of anything. I tried to act like a grown up when my inner child was stamping her feet and crying "That's not fair! You promised!"
For those of you who sleep under a rock and, as such are blissfully unaware, or simply put your head in an ostrich-sized sand dune, I've got to tell you one this. The word "colonoscopy" is the worst part about the whole thing. In fact, I think there should be a law against the words colon and scope being used in the same sentence. Don't let the name scare you. For obvious reasons, I think one's private parts are called private for a reason. I don't think God ever intended for one's bottom to be the object of so much observation. However, once you get past the idea of it, and then you get past the "Prep" the actual test is a breeze. 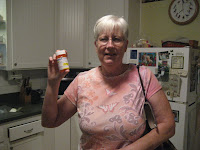 My preparation consisted of a liquid diet the day before plus the ingestion of 32 vitamin-sized pills each followed by a glass of water. Toward the end of the evening, I was feeling rather bloated, and a little afraid of having the faucets turned on at both ends (if you get my meaning) but I never did throw up ... thank you Jesus! Strangely the thing that caused me the most discomfort the morning of the exam was that I was so thirsty and not allowed to drink anything. [Photo: One rather large pill bottle full of colon cleansing pills.]

I had every intention of staying awake for the procedure. I mean, come on, I'm a journalist, right? Well, not a real journalist, but I fancy myself a writer, a storyteller, a purveyor of prose. How could I write of my experience if I didn't stay awake? If Katie Couric could be followed into the examining room with an entourage of cameramen, the least I could do was stay awake - right?
Wrong? Every nurse I talked to -Leslie, Tiffany, Danielle and Supressa (you'll not a finer group of ladies decked out in hospital scrubs) - as well as the doctor in control of the drugs, told me, "Go to sleep." All it really took to convince me was being wheeled into procedure cubicle where, on one side of the room, there was a Diet Coke resting on an equipment table. I would have paid a king's ransom for just a to taste of its contents. When I turned my head to scope (no pun intended) out the other side of the room, my eyes fell on a rather l-o-n-g looking instrument that was clearly meant for my hiney. Suddenly good advice won out over dreams of a Pulitzer Prize. In other words, I opted for the sleep meds.
Not long after I closed my eyes, I was awakened by a gentle, yet urgent, voice saying, "Mrs. Ellington you need to pass some gas." Talk about nightmares! I think I've mentioned before that I am a private pooter. Being lined up in a row of other semi-conscious patients all being asked to "pass gas" at the same time was enough to make me poot, roll over and go back to sleep.
And that was it. Dr. Corregidor breezed in, told me I had an excellent looking, polyp-free colon and nee 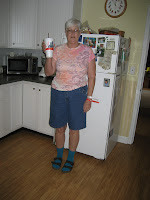 dn't worry about it having this bit of medicinal exploration done again for five years.
Because of all the air they had blow up into my colon for a clear view I was warned not to drink any carbonated beverages for 24 hours. Yeah, right! On our way home, my sweetie who was very proud of my "big girl" approach to the whole thing stopped and got me a super-sized Coke. God I love that man! [Photo: One rather large Coca Cola!]
So there you have it. I had a colonoscopy and lived to tell about it. And you will to. If you are 50 or over, go ahead, get it done. Like cleaning your car, you'll be glad you did.
Facts and Figures: According to the American Cancer Society (ACS), colorectal cancer is the third most common cancer diagnosed in men and women in the United States (excluding skin cancers). Colorectal cancer is the second leading cause of cancer-related death in the United States and is expected to cause about 52,180 deaths (26,000 men and 26, 180 women) during 2007. More than 90% of colon cancer cases occur in people age 50 and older. For this reason, the American Cancer Society recommends you start getting tested for the disease at age 50. People who are at increased risk for colon cancer -- for example, those with a family history of the disease -- may need to begin testing at a younger age. You should talk to your doctor about your specific situation and when you should begin getting tested.
Signing off because I still have a few chores to do,
Merry ME
Posted by Merry ME at 4:34 PM