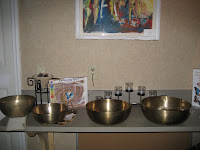 I left the house about six hours ago but my retreat didn’t officially start till 3:00p.m.when I checked in. So I’ve been on my own for a little over four hours. Well, not really on my own, as I went back to the place where I got my healing rocks and had a Tibetan Singing Bowl massage.

It sounds weird, and the girl suggesting I try it agreed it was a little weird at first. According to her, the two things it had in its favor over traditional massage were #1 you don’t have to get undressed and #2 a stranger is not rubbing oil all over you. I would add my own #3 that it was cheaper than the other massaging choices and #4 the man who does the bowl treatment was on call and was taking late afternoon appointments. I had no idea what I was getting in to, but since this weekend is an experiment in inner healing, I decided it couldn’t hurt.

Jeff was not at all what I expected. Not that I knew what to expect, but I had visions of a bald guy in an orange sheet, or someone left over from the 60’s - long gray hair, tie-dyed shirt, flip flops and congenial in that laid back groovy kind of way. (Not that there is anything wrong with that!) It was the reference to Tibet that through me off. Jeff was just an average guy, with a desire to help people vibrate themselves into alignment.

He directed me to lie on to the massage table, pulled my arms and legs till they wouldn’t stretch any more, had me do some deep breathing while he pounded on my clavicle then told me to roll over to start the massage.

Tibetan singing bowls are (no longer made in Tibet but India for reasons I’m not sure of but might have to do with politics) made of 14 metals, one of which is an old bowl that can’t be used anymore. Jeff didn’t explain why an old bowl can’t be used, but maybe it’s because of cracks or something. However, I like the recycle-ness about using the old metal in the new. Jeff placed three different sized bowls on my back - near my feet, just over my rump and in the middle of my chest. I don’t know what size when where but I could tell the one on my chest was the heavier of the three. It had a deeper, more gongy tone to it when struck with the Tibetan singing bowl felt mallet.

The sounds are hard to describe. Each bowl definitely had a different tonal range, and they all vibrated to a different degree (Papa Bowl, Mama Bowl and Baby Bowl vibrations). Like hitting a tuning fork, or throwing a pebble in a pond, the ripples go out of the bowl, and since the bowl was sitting on my back the vibrations connected with my body’s natural vibrations and kind echoed? When Jeff was near my head, I could feel (hear) the vibrations in my ears. The song the bowls sang was a bit like organ music in the way it vibrated. You know how a steeple bell sounds when it’s calling you to worship – DONG-G-G-G-g-g-g-g? Can you imagine feeling that as well as hearing it?

I never fell asleep. I was always aware of sounds just outside the room. But I was also kind of in a Tibetan bowl trance so that I didn’t want it to end. After the last tinkling of what sounded like little angel wings, Jeff whispered to me to take my time getting up and that’s what I did. I was surprised to find that when I sat up, my head was still vibrating; I felt a little dizzy but definitely relaxed ...and hungry.

The only problem I can see with this kind of massage therapy is a personal one. I found that the vibrations loosened a few of what I hoped would be tiny little poots. It would have ruined the ambience if I had “let one rip” (as the nurse described Dad’s first trip to the bathroom after his ill-fated colonoscopy) so I was a little on edge about that.

As I was leaving, my new friend Bella, told me to have a good retreat. “I’ll try,” I responded as I vibrated towards the door. Then I stopped, and corrected myself, “I will” I said with assurance I hadn’t felt all day. “Thank you,” she replied as if my assurance somehow made her feel better. Bella is a cancer survivor and I think she connects to people on a different level than I am used to. I liked her a lot.
Posted by Merry ME at 9:37 PM

There are angels all around us. Seen and un-seen. They show up in the oddest places. Public toilets, rental car counters, and very often in stores that attract us. It is my belief that every time a spirit vacates an earthly body it is to return home to Spirit. As with any rule or belief, there are exceptions. A few angels live through their earthly trials only to be asked to stay a while longer. I can imagine the conversation; "I'm ready to return home." "Yes you are, and I wait to welcome you home. You are such a joy to so many. Please remain within your person, MY WORK, through you is not done yet." The angel happily complies and continues to touch the souls in need.