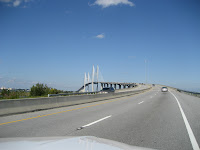 Last week I was looking forward to taking a road trip to see the Smokey Mountains decked out in their beautiful fall foliage. Circumstances beyond my control caused a postponement, perhaps a cancellation of the trip altogether. Nothing like a little angina (not mine, my Dad's) to let the air out of one's tires - metaphorically speaking of course! All's well that ends well, however. We got Dad home from the hospital and settled back into our daily routine after only three days.
Still I needed a change of scenery. On a whim, Jack and I left my sister, Jean in charge of the homefront while we headed north on Highway A1A. We discovered the old beach road ends rather abruptly in a stand of sea grass. This is probably because Fernandina calls itself an island. Feeling wild and carefree we decided to turn the corner and follow where the road led us. A drive along the Florida coast soon turned into junket through southeast Georgia. The temperatures had dropped to a pleasant 70-something; there was nothing but blue skies as far as the eye could see. I could feel the tension seeping from my shoulders as the odometer clicked off the miles.
Here are some of the highlights of our "unplanned" (see previous post) outing.
1. W 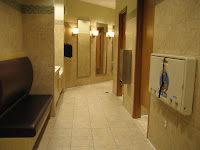 e stopped for a potty call at a place called El Cheao gas. As it turned out, this truck stop/gas station/jiffy mart was anything but cheap when it came to its accoutraments. It was easily one of the largest and cleanest I've ever seen. The bathroom was most impressive so I decided to pull out my trusty sidekick and take a few pictures. 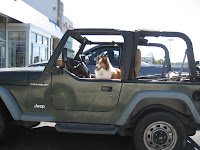 2. You gotta love a dog that will just sit and wait in an open topped jeep for his master to come back.
3. The wild flowers along the side of the road were quite prolific. Blankets of pink and purple blooms waved thier flowery heads at passing cars. I felt a little silly asking Jack to pull over so I could take some pictures, but every time I asked he did; even when it meant making a Lincoln-sized U-turn in the middle of a two lane road. I thought it was particularly cool to see other people were doing the same thing. One yo 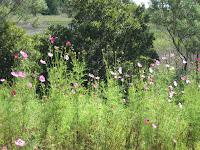 ung couple was even having their wedding photos taken. There they stood, knee high in the wild flowers and sticker burrs, the groom proudly outfitted in his Army uniform with his v-e-r-y pregnant wife decked out in a long white wedding gown. The sight of love and flowers in bloom on a gorgeous sunny day brought a tear to my eye. Love .... you gotta love it! [Photo R: My photograph doesn't really do justice to the wildflowers!]
4. Not fa 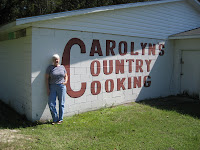 r apart on this Georgia highway we passed Carolyn's Country Cooking restaurant and a lone garbage-eating turkey buzzard. The once proud eating emporium (you could tell by the size of the lettering on the wall) was deserted and no longer serving up any food, yet it was a photo opportunity not to be missed. As you may recall from previous posts my inner child, Carolyn, is not shy ab

out letting her needs be known. At seeing her name written on the side of a building she got quite excited. I was glad to see there was no phone number attached! The turkey buzzard enjoying an afternoon snack from an up-turned garbage was also a Kodak moment I couldn't resist. Unfortunately as soon as Jack whipped another U-y and I hopped out to take the picture for Wendy's collection of black bird photos, this particular bird got a little camera shy. It was kind of funny to see him walk/run/buzzard hop away. I know there is a big difference between a buzzard and a crow, but they are both black! Enjoy Wendy!
[Photo R: Run, little buzzard, run!]
5. We soon found ourselves on Jekyll Island, not far from Brunswick. There were festivals [the Birding and Nature Festival and the Brunswick Rockin' Stewbilee, respectfully] taking place on in both places. Somehow we managed to miss them both. Since I believe one of my manitoos is the slow but steady turtle, it was fun to stroll through the Georgia Sea Turtle Center and learn more about this languid yet enduring species. With all the impediments in their way, i.e. turtle eating critters, beach trash, humans, pollution, and plastic garbage bags, to name just a few, it's actually kind of amazing that any of the cute little baby sea turtles ever grow up to be big - BIG - sea turtles. What I find even more amazing is that these creatures swim circles around the Atlantic Ocean, struggling to survive for years on end. They don't come back to Georgia to reproduce 'til they are almost 60 years old. No wonder those mama turtles crawl so slowly up the beach. They are worn out!
6. We hurried through the Turtle Center because we wanted to make it to the Stewbilee. We were a little surprised, and a lot disappointed, when we got to the rather sleepy looking town of Brunswick and found it closed up tight. Either they ran of stew or just practice the Hispanic tradition of afternoon napping. There were very few people in sight and narry a stew stand. At least none that we could find.
7. However, we did come upon a sign that pointed us to another local attraction - the Lover's Oak. Obviously love was in the air for us because Jack agreed when I asked if we could have our picture taken by the tree. Even though there were arrows pointing to this behemoth tree, at first we managed to miss both the signs and the tree. But we did see all kinds of magnificent Victorian style houses. Houses so big it's hard to know how the owners could afford both the mortgage and the utility bills; especially considering we had yet to see too much of an active business life in this town. Driving down some of the streets that had been there since Captain Mark Carr settled the Brunswick plantation in the 18th century, we were transported to a different time and place. Oh to sit on a rocker on one of those wrap around porches and listen to the stories the creaky old places could tell. 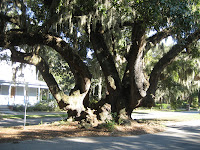 8. Eventually we found it - the Lovers Oak. Although there was no explanation as to how the tree got its name, there was a plaque that verifies that the tree has been standing on that spot since the signing of the U.S. Constitution. Needless to say, a tree can grow pretty big in two hundred yea 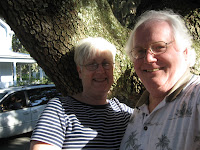 rs. I doubt Jack and I were the only lovers to have our picture taken by the tree, or in the tree. In fact, I was kind of expecting that young soldier and his bride to drive up! As far as I could see, no lovers had carved their names in the trunk and branches of this stately oak. I'm proud to note that we did not start a tradition even though it was very tempting. [Photo R: Okay, so I have a shadow on my face. We haven't yet perfected the art of self portraiture!]
As with most good things, our day was over before we were ready to see it end. We drove home quietly, each of us lost in our own thoughts. Driving to Georgia was not quite the same as driving to Tennessee. There were no red and yellow leaves to see, even on the Lover's Oak. But seeing the pink and orange wildflowers, the puffy white clouds, the greenish brown turtles and the blue of my sweetie's eyes was like getting a sneak peak into God's box of Crayolas. It was good to get away and it was good to be together. 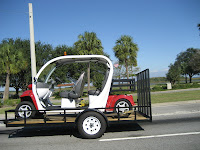 Here's wishing that the road you travel be full of interesting sites,
[Photo L: We were'nt exactly sure what this modified golf cart was all about but it tickled out funny bone.]
Merry ME
Posted by Merry ME at 4:45 PM