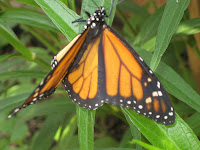 "I believe that there is a subtle magnetism in Nature, which, if we unconsciously yield to it, will direct us aright."
Henry David Thoreau
My writing group is going in a different direction over the summer. Instead of writing something new every two weeks, we're going to work on editing what we've already written. It has also been suggested that we spend time outside of our normal surroundings to gather new ideas and inspiration, to take notes and pictures, to let our creativity soak up what is going on around us so that when we come back together in the fall we'll be excited about writing again. Like a little kid being given too many choices, I'm not sure if that is expecting too much of my muse. Does she work better in a controlled environment (maybe not since I still have not produced April's essay on "Home") or one in which she gets to let her hair down and play? I guess we'll see at the end of the summer just how much oversight I need to keep me on track.


Today the group met at Tree Hill Nature Center. It is a hidden sanctuary of peaceful serenity located less than 10 minutes away from my home. It could be a hundred miles for the number of times I've been there in my life. Sitting in what must be a vortex of solitude for our city, the park is located right across the street from a big cemetery. Rows upon rows of tombstones mark the sod covered places where people have been laid to their eternal rest. Tree Hill's expanse, on the other hand, has been set aside to give school kids a taste of the natural world they inhabit. Not the world of shopping malls whose black topped parking lots are devoid of anything green. Tree Hill is not a zoo environment where cages separate wild animals from hyperactive students. At Tree Hill kids learn about native Floridian flora and fauna. They can stroll through fern lined paths and imagine what it might have been like for the natives that once called the woods home. They learn how to turn trash into compost.


Our writing group began today's meeting in an indoor. i.e. cool, environment. Thankfully we were not asked to sit on the cut timbers out in the park. The women, who each admitted to being over a certain age in order to save a dollar on the entrance price, might have been able to get down to ground level but our "senior" knees would have protested standing back up! We discussed each other's health, what we've been writing, and an amazing connection between two members of the group. SQire Rushnell would have nodded knowingly at the story and called it a "God Wink" telling us that there are no coincidences in this life. Mostly we just murmured "Oh my God's" in unison as each dot was connected to another in the lives of two women who were brought together by the love of words.

As the other women talked I became keenly aware of listening (see post below). I leaned in, made eye contact and smiled as the story took amazing turns. Carol is a first rate story-teller anyway, but we all decided this one is good enough for the Oprah Show! Funny how Oprah has kind of become a standard of excellence for today's writers. You know you've made it when you get a call from Harpo Studios. Even if you write nothing more than "Random Thoughts" in a black and white Composition book (or on the Internet) there is always that secret desire to have your words acknowledged. While Oprah is the queen of acknowledgement, I for one am blessed to have this small group of wordy women to turn to for help and support. (That said, I wouldn't say no to Oprah!)


After an hour of friendly fare we headed out into the summer heat to wander the nature trails and connect with our individual muses. First stop for me was the small butterfly garden. There I stood, trying to be still, a visitor in a veritable butterfly smorgasbord. As I watched, camera poised for a photo op the likes of National Geographic, the butterflies did what they do. From flower to bush and back again, they fluttered and flitted and filled themselves with life sustaining nectar.


I've visited butterfly gardens before and never had one come close to me. Today was different. A small but friendly butterfly landed on my head, then, crawled up on my finger and stayed there. We communed eye to eye and nose to proboscis for awhile. It was a spiritual moment. One that defined for me what Carol meant when she said being out of our regular writing environment would refill our idea banks.

From butterflies to goats. I'm not quite sure why there are goats in a nature park except that they are cute and undoubtedly entertain grade school kids. As one writer took notes on one side of the fence a goat tried to eat her paper. As usual my photography reflexes were two seconds too slow.

Next I mosied on over to the barred owl as the other ladies went in different directions. The owl watched my movements with eyes that reminded me of those giant portraits in a scary movie library. The picture looks old, the paint cracked and peeling, but the eyes are alive moving two and fro. In the movie there is usually a bad guy on the other side of the paneled wall which leads to a secret hideaway. At Tree Hill, the barred owl sat on his perch, watching me watching him but didn't look too threatening.


I tried to take a picture of a spider that was barely a half inch in size. I couldn't get my point and shoot camera to focus any better than my own eyes. The spider was nothing more than a black blob in every picture. I got as close as I could without falling head first into the magnificently formed web that glistened in the slight breeze. While I enjoyed looking at the critter, I had no desire to disturb its handiwork. However as I zoomed in, I realized the little guy was hanging upside down. Small as the spider was, I couldn't help but notice that God had placed a teeny tiny but bright orange smiley face on its stomach.


Spiders don't always get a good rap. They can be so big and hairy only a mother spider would think they hold any appeal. They can be deadly. They can be used as instruments of torture by one sibling to another. But who knew something with so many legs could also make this arachnophobic writer smile?

According to http://www.starstuffs.com/ "there are hidden qualities of nature that we can access if we are attuned to the natural forces around us." Animals are "psychological and spiritual symbols that convey to us qualities we are needing or lacking our daily lives." Feeling particularly tuned in when I got home I googled animal totems to see what I might be able to learn about myself from today's encounters with a butterfly that didn't seem to want to fly away and a cheery little spider.

Everyone knows that the caterpillar to cocoon to butterfly journey symbolizes transformation. Duh! I had a butterfly tattooed on my ankle years ago after awakening from a life-altering depression. However, another lesson to be gained by one's butterfly totem is to "be joyful and thankful for your blessings." A spider totem, on the other hand, helps in "creativity and inspiration" and reminds on to "stay focused on the center of things."

I have to admit, I got a little bit of a shiver when I read the following: "spider will aid in communications and the written word."

It could been something as simple as opening myself up to the moment and different surroundings. It could have been my muse coming out to play. But I'm thinking in the beauty of a sunny day, just when I needed some reassurance that I'm on the right path a butterfly hovered, a spider smiled and God winked.

Maybe you need to take what you write here and turn in for your writing group, cause this was lovely.
Changing the subject I once took a goat for a walk and took her into my local bar ( where I worked sometimes) and she put her hooves on the bar and got given a packet of peanuts for being wonderful.
xx