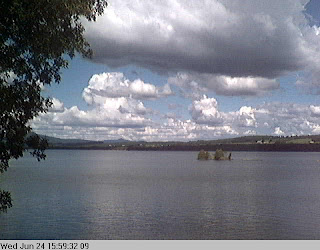 "I hear lake water lapping with low sounds by the shore ...
I hear it in the deep heart's core."
William Butler Yeats
Dictionary.com defines refuge as "anything to which one has recourse for aid, relief, or escape," and lists asylum, retreat, sanctuary, haven, and stronghold as synonyms.

Other bloggers I follow have recently written about places of refuge - a porch, a garden, a woodsy path. Firebryd calls the porch she's been visiting "this sanctuary for my soul." Sorrow says of her labyrinth, it is "my grounding point. My deep connection with self and with my faith in something greater than myself." And Swallowtail wrote of wildflowers, "how tenacious their grip in the dry soil, how these beautiful beings support me." All topped off by a photo on The Bedlam Farm Journal of a wooded path somewhere in eastern New York state.

I think I am missing such a place in my life. I look around for a place to go to unwind and renew my spirit yet, like Goldilocks, nothing feels quite right. My sister goes to the beach whenever she can. I know the ocean can be a spiritually satisfying place but I make excuses to stick closer to home. To paraphrase Proust, perhaps my refuge lies not in a new place but in seeing with new eyes.

For today, however, I'm stuck in memory mode.

My grandparents used to have a "camp" on the edge of Lake Carmi, in northern Vermont, not far from the Canadian border. It was comprised of one main cabin and two smaller sleeping cabins, all surrounded by and nestled in lots of trees and bushes. Grammy spent summers there for as long as I can remember. I only visited a few times but for some reason, still unknown to me, the lake has been calling name. I long to sit on the dock that jutted out into the water and dip my toes into the cool clear water. (The water I remember from my youth was clear - not sure it is anymore.) I feel like my soul needs to be calmed by the rhythmic sound of water hitting smooth stones where chipmunks scurry and play. Perhaps my Picesan (is that a word?) water sign calls out for a skinny dip in the lake where moonbeams dance on the water and tree frogs sing their evening songs.

Even though Grammy's camp was never home to me, I feel like it is bubbling up from my memory calling me back to my New England roots.

The woodsy photo on yesterday's Bedlam Farm Journal took my breath away. As if I had been plucked from my living room and dropped into the center of Grammy's camp by some kind of Star Trek transporter, I felt the years slip away to when I was a kid. Take away Maria and the dogs and you have a path very similar to one I used to walk and pick wild berries (raspberries and blackberries). Go off the path a little and you might find a place to dig great fishing worms. My grandfather said he'd take me fishing but I'd have to bait my own hook. I think digging up the worms was way more fun than impaling them on a sharp hook. I don't recall ever catching a fish, which in the long run was probably a good thing. For some fishing might be all about the catch; for others it might be sitting in a small boat with the smell of oil and gasoline and worms wafting on the breeze across the lake.

The main cabin from Grammy's camp is no longer there. It's been torn down and an A-frame put up in its place. I've never been there so my memories are still in tact.

Camp was a place where adults gathered. Kids were left to their own devices and tolerated as long as they were seen and not heard. I didn't know it then but camp must have been a place of refuge for work weary parents. I'm guessing all the moms and dads that made the Vermont pilgrimage in an un-airconditioned car stuffed with suitcases and whiny children felt the way I long to feel again. As the car pulled onto the rocky path that led to the lake everyone in the car hushed a bit as if entering a holy place. Once the engine stopped and the doors flew open and the "good Vermont air" filled their nostrils old and young alike listened for the sound of the lake saying "welcome home."

There is a lot of talk of dying around here. I spend a lot of time wondering when and how my dad will pass from this place to the next. Like a long and winding road that leads to nowhere in particular I wonder what I'll do and where I'll go after he's gone. I'm pretty clear I don't want to stay in this house. I need to move on. Is that why the lake is calling me? Does my inner sonar know something I don't? Is home a place or state of mind?

Think I'll go watch On Golden Pond - the next best thing to being there!

I remember when my yaya was transitioning at the end of her life. I love that term, the hospice nurse used it, "transitioning" as if moving along from one space into the next.
Her home was not mine, but it was full of memories, some good, some bad.
I often used to sit on a folding chair out in the garden while she slept.
Wrapped in a sweater with my eyes closed and the sun on my face. just conscious of the heat , the breath and the sounds of the birds and breeze. I think that a sanctuary is any where, really, that brings you back into center.
I have always loved this song...
http://www.youtube.com/watch?v=5Sa20GHWJj4&feature=PlayList&p=362892727078D980&playnext=1&playnext_from=PL&index=39

oh, and this one too, because this one made me think of you as well...
http://www.youtube.com/watch?v=EwJIWxX-Vb8

My dear Sorrow,
Not one but two John Denver songs I've never heard. I sat at the kitchen table listening with tears running down my face. I didn't know the songs, but I new the music and the gentle voice of the man who always took me to my own private sanctuary. What a friend you are to remember even when I don't. Bless you.