I haven't been blogging for awhile. Not sure what that's all about. I was sick for awhile and recently went out of town. Mostly it just didn't seem like I had much to say. Writer's block? Perhaps. Or maybe just taking a break.
Over the weekend, I took a walk down memory lane while spending time with the family for whom I was a nanny for 4 years. I think I've said before, Robert was only a month old when I began taking care of him, last Friday he turned 16. As we said many times over the weekend, where does time go. It was a great delight to sit for hours watching old videos of the little man I remember so clearly. I can't remember much that happened yesterday, but I hadn't forgotten the Robert's chubby little cheeks, the fun he had in the bathtub, his gingham outfits and blue Keds, and the times he splashed in puddles with rubber boots that reached his thighs. 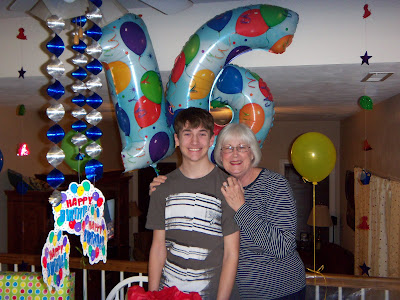 At 16 he was reticent to have his picture taken a hundred times by a crazed woman wanting to capture every moment. He didn't especially want to hang out at the party store picking out decorations. Truth be told, he probably could have cared less about balloons and crepe paper. While he slept the deep afternoon sleep of a teenager, his mom and I played party planners, told and retold past stories and caught up on all the years in between. It felt so very natural to be together, sharing our love for each other and one special man child. 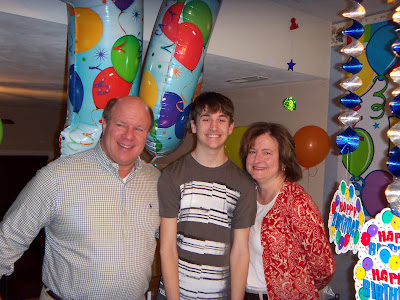 When he was growing up Robert had a toy chest full of plastic weapons any hunter/gatherer would be proud of ... pirate swords, baseball bats, Bowie knives, as well as a wide variety of automatic side arms that made machine gun noises, shot suction tipped darts, popped caps that smelled of gun powder, and little green Army men to make the ensuing carnage more realistic. Even though I've never been a "gunny" (as my Dad was quick to point out) it was I, his peace loving nanny who took him to his first pg rated movie (Zorro) and sat for hours with him as he reran the coconut bomb scenes from Swiss Family Robinson. So why was I surprised to see the grown up version of my charge holding a brand new shotgun? At least his targets are only clay pigeons. 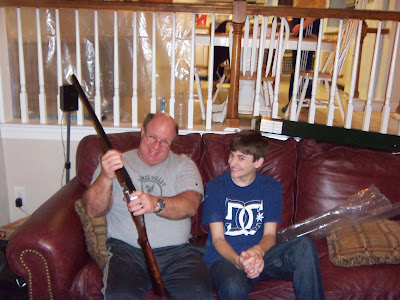 There was much to catch up on. But what I think I may have enjoyed most were the quiet, unexpected moments when I'd feel his hand on my shoulder in a tender touch that said a lot more than words. Before leaving he let me into his inner sanctum where I lay on his bed (which is still covered with the quilt I made him for his 2nd birthday - how's that for lasting power!) next to him trying to get one last picture of the two of us. 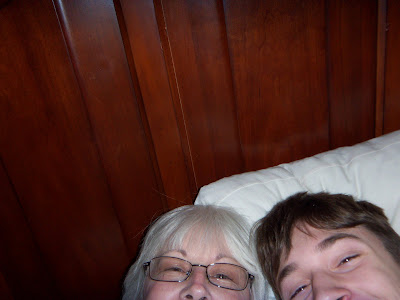 I love you I said as I tiptoed out of the room. I love you, too, came the response from somewhere under the covers. Be still my heart!
Wishing for you happy days and good memories,
Merry ME
Posted by Merry ME at 11:43 AM

That is really cool, Mar! So glad Robert turned 16 and brought you out of your shell to post about it! I love the part about his hand on your shoulder! Nice. VERY nice. And good to "see" you again.

look at how your eyes are smiling!

This is such an AWWWWW moment!

sorry blogger is being a pill,
It's me, Illuminary

Ahhhh.....what a great love story!! It's so good to see such a big huge smile on your face!

I've got happy tears in my eyes Mary...what an awesome post!

It is a great love story and the appropriate month to go with it. :)