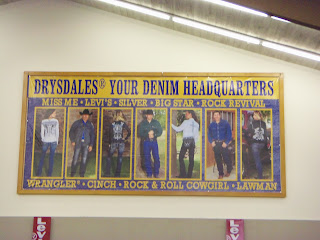 When we walked into Drysdales we were greeted by a sweet, leathery smell,  and a sea of hats, boots, blue jeans and western paraphenalia. Except for being a bit pricey, it has to be a cowboy's clothing heaven. If diamonds are a girl's best friend, then denim is undoubtedly the same for an Oklahoma native. We gave ourselves away as strangers in a strange land when I pulled out my camera and started taking pictures.  Like being 6 years old and standing in Macy's storefront Northpole.


The reason we went to this store was to check out the boots. But Sweetie went straight for the hats. OMG! What a hoot! I made my way over to the boots. A girl who could tell I had no idea about boots followed me around explaining boot sizing and boot style. I strolled the aisles amazed at the selection. I only tried on one pair, because stuffing my fat feet into pointy toed boots caused my toes to yell for mercy.  It was enough to ooh and ahh. 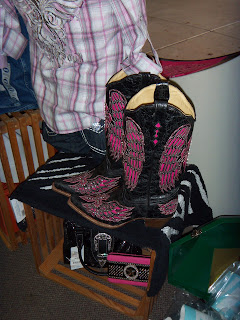 After about an hour we left without making one purchase, and headed down the street to Drysdale's competitor. Sweetie thought they were even pricier, if you can imagine that. Eventually it was time to quit playing and head back to the motel to change for the wedding. It was a fun day in a let's pretend world.

Wishing for you delightful things to try on,
Merry ME

P.S. I am not too pleased with the new blogger. It's gonna take some getting used to.
Posted by Merry ME at 9:51 AM

Merry-ness! How fun that you ventured in! As a long-time cowgirl (boots and hats GALORE!) I am not stranger to such stores. They're great fun to wander 'round in, and if'n yer into that sorta garb, even the high price tags are worth it. I have a pair of boots that I've owned since (are you ready for this???) 1982! Yep, that's right. And not because I don't wear them. Just cuz cowboy boots tend to be made "sturdy". Anyway...I just wanted to send a hug and some giggles on this one. Well done!