I went to a public school in Waukegan, IL, for grades two through four.  From classroom photos of the time, I can see that white kids outnumbered black. Too young to know how the world worked,  the disparities in color and class didn't mean a whole lot to me.  After we moved to Florida, when I was 11 or 12 years old, I began to realize that differences between whites and colored made a lot of people uncomfortable. Back then my friends and I were allowed to go to the local strip mall (unchaperoned, on a bike, without wearing a helmet.) We carried enough money with us for a plate of french fries and a cherry coke at the Pic 'n Save lunch counter. Walking down the dark hallway to use the restroom, I had my first sighting of racial prejudice. The bathroom and water fountain were clearly marked "No Colored."  A place in the vicinity of my heart began to ache.

In the years that followed I watched the Civil Rights marches on television.  To ease the pain in my heart I wrote letters to the President, the Mayor, my preacher and my doctor (I have no idea why I included Dr. Clarke) asking for help in changing things. I never received any answers. I'm pretty sure my mom or dad confiscated the letters before they hit the mailbox. Like other subjects left untouched, we never discussed the letters or the subject of racial prejudice.

When I was a senior in high school I had a rather disheveled psychology teacher who, as we might say today, thought outside the box. Or maybe I was so ensconced in the box, any other expressed ideas appeared radical. Granted it was a long time ago, but here's the one thing I took from that class: at least two boys in the class would be killed in Vietnam attempting to stamp out communism. I looked around the room and tried to guess who it might be. I couldn't imagine that something happening a half a continent away could come so close to home.   Even after I was married to a U.S. Naval officer, I  never thought about my husband's west coast counterparts flying helicopters into steamy jungles to rescue boys like the ones I went to school with.

Fast forward several years. The war was over. The Berlin Wall had been torn down, detente had silenced the communists. I attended a beach party with my husband's joint military school classmates in Norfolk, VA. One man, an Army guy, bore the scars of Vietnam on his back. I didn't ask questions, or speak out, but my eyes were quite literally opened. My heart hurt.

My heart continues to hurt. Ferguson, MO. "I can't breathe." Afghanistan school children murdered.
# Charlie Hebdo. Nigerians massacred. Homeless people sleeping under the 200 year old tree where I take Bella. My friend's son so messed up on drugs that he could be sleeping under that same tree. Humane Society ads that show shivering, abused cats and dogs. High rate of suicide in veterans and teens. Domestic violence. Families that live with autism, juvenile diabetes, and cancer. Sandwich generation caregivers that work their fingers to the bone. Etc. Etc. Etc.

In her blog, A Design So Vast, Lindsey Mead wrote this today:


"It’s all connected, the way I observe the world in sometimes-excruciating detail, the untrammeled rushes of joy I can feel at the most unexpected times, the heart-wrenching pain my life delivers at others.  This is all a part of being an exceptionally porous person.  Is it any wonder that I’ve had to develop coping mechanisms, be they an aversion to true vulnerability or a tendency towards distraction, in order to mitigate the power of constantly living in such an exposed way?  I’m easily overwhelmed by the grandeur and terror of this life, and I have over 36 years built up a variety of ways of managing the pain that that inundation can bring with it.  It’s a package deal, the wound and the wonder.  I don’t know how to have one without the other.  Even the most swollen, shiny rapture is striated with sadness."


I, too, am "easily overwhelmed by the grandeur and terror of this life." I cry when I hear Bella sing Twinkle Twinkle Litle Star, all by herself. I grieve for people I don't even know. I've been told that I'm too sensitive. I'm learning my sensitivity is not a bad thing.  Now I have a name for it. I'm an "exceptionally porous person," and that's ok. What might the world look like if there were more sensitive people in it? 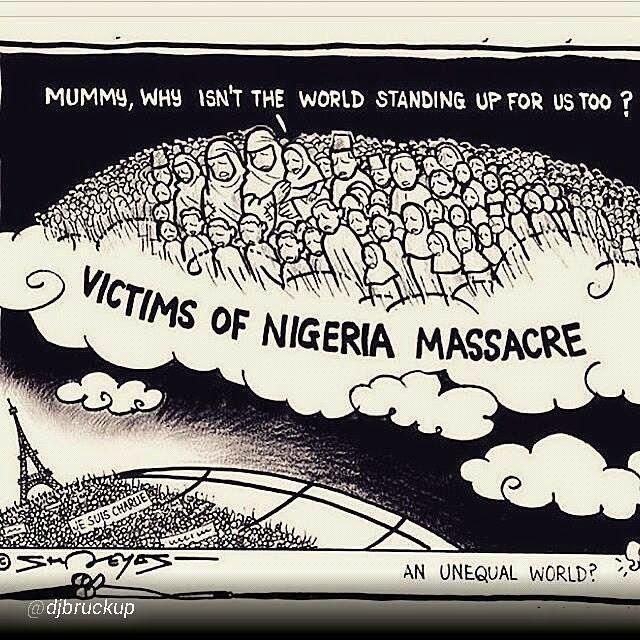 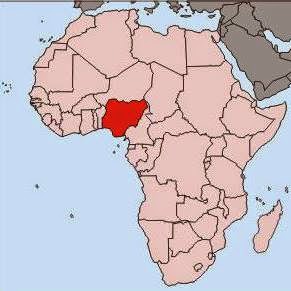 Today I've struggled with the disparity between the news coverage of the terrorist attacks in Paris and the lack of coverage in Nigeria. When I first read about the Boko Harem attacks in Nigeria, I cried. I didn't want to keep silent. I wanted to let loose a lifetime's worth of pent up scream  What the fuck. Instead, overwhelmed by the sadness, I closed my computer and tried to forget. Ever the ostrich, if I don't see it, it didn't happen. To be honest, I didn't even know where Nigeria is. Do you?  Shame on ME. That's what I feel today shame for always be silent. A big fat foot long sandwich loaded with shame, sadness, bewilderment and a side of where is God in all this?

"No words can condemn sufficiently such atrocious deeds
and I call on the Nigerian government and its allies to step in and stop this atrocity."
Archbishop Desmond Tutu


My first questions are never what can I do? Why, is always my gut reaction to atrocities. Sweetie dislikes the question.  Because all other questions pale, I ask it anyway. Then there's the question of faith. If, as I believe, we are all made in the image of a loving God, and that God blew his life-giving breath into us, how can some people be so evil as to strap bombs on 10 year old girls and send them into a crowded marketplace? Or lead others into a gas chamber? Or? Or? Or? Where is God?
Eventually, I get to a place where I have to ask, where is Merry ME? What can I do? Why don't I do it?


"One of the most calming and powerful actions you can do to intervene in a stormy world is to stand up and show your soul. Soul on deck shines like gold in dark times. The light of the soul throws sparks, can send up flares, builds signal fires, causes proper matters to catch fire. To display the lantern of soul in shadowy times like these – to be fierce and to show mercy toward others; both are acts of immense bravery and greatest necessity."                 Dr. Clarissa Pinkola Estes

I'm pretty clear that there is nothing I can do to make a difference in Nigeria, Paris, Afghanistan, New York or Missouri. I must  find a way to make a difference, here in my little corner of Jacksonville. I have to hope that the butterfly effect really does exist and the ripples of my kindnesses will make a difference. I want the lantern my soul to shine in these shadowy times.

I'll end with this quote by Chaz Ebert about her husband, Roger:

"… it is not divisions or fear that push us forward, but love. Love in the face of all the unforeseen challenges is the binding force that brings people together, and helps us develop empathy and compassion for each other. On his deathbed, Roger spoke of visiting this beautiful place where the past, present and future exist simultaneously and where there is a divine oneness that binds us all together, more vastly beautiful than we could ever comprehend. I think he has all the trophies he will ever need. "

Tonight I will squeeze out my filled-to-overflowing soul and pray to the "divine oneness that binds us all together," for a world where love rules.
May it be so.
Merry ME
Posted by Merry ME at 12:25 AM

My beautiful porous soul.. You do add so much light into the world, even beyond the confines of Jax. Never ever doubt that there is a ripple of love that you send out every day. Even on days when you have the covers over your head.
You make my world so much better, just because I know you are there.. loving the world into change...