"The best way to pay for a lovely moment is to enjoy it."
Richard Bach

According to a recent news article scientists have discovered that chimpanzees often use hugs and kisses the same way as humans to comfort, sympathize and decrease stress in fellow chimps. "Researchers found that stress was reduced in chimps that were victims of aggression if a 3rd party chimp stepped in to offer consolation." What makes this behavior interesting is that it is only used after a conflict.

"This study removes doubt that consolation really does what the term suggestsL provide relive to distressed parties after conflict. The evidence is compelling and makes it likely that consolation behavior is an expression empathy," said Dr. Frans de Wall of the Yerkes Primate Center at Emory University. [http://dsc.discovery.com/news/2008/06/16/chimp-hug-kiss.html, Chimps Hug, Kiss to Show Support, Randolph E. Schmid, Associated Press]

I found this information of particular interest and quite timely. Since I've been feeling blue, my Sweetie has come to my rescue by offering big bear hugs and not flinching when I cry loud, snorty tears all over his shirt. I don't know if we have any chimpanzees in our family tree, but I do know that you don't have to be a monkey to reap the benefits of an extra large hug. In fact, I suspect that when the Creator was creating he must have said something like, "the better to hug with" when he gave us two arms. Perhaps if we employed more hugs we'd need less bullets in the world. Who knows? Can't hurt.

Here are some other depression busters I've encountered in the past few days: 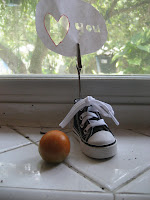 The first tomato of the season. Well, not exactly the first, but the first that didn't stay on the vine getting red and get drowned by all the rain we've had! I decided to let it ripen in the window sill. 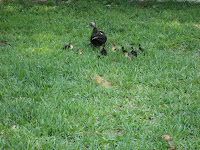 A mama duck and a whole herd of fuzzy, black and yellow ducklings. A couple of the babies were having a grand time in a pan of water but as soon as I approached with a camera, the mom called them together and they waddled off into the protection of the grass. 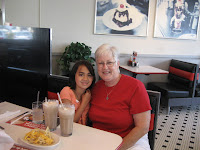 The second annual summertime lunch at Steak N Shake with my friend Desire. Her cousin insisted we try the cheese fries which weren't too bad until they got cold. We decided in unison to get the full-sized shakes not the juniors. Dang, they were good! 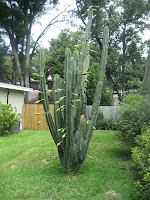 A giant cactus that has obviously been in the neighborhood for years but I'd never noticed before. For some reason cacti always make me smile.


Signing off and hoping you found something to make you smile today,
Merry ME 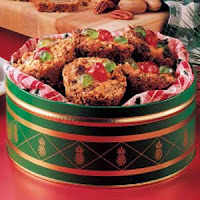 Put pecans and fruit in a large bowl; toss to mix. Sprinkle flour and baking powder over top and mix with hands to coat. In another large bowl beat eggs, sugar, vanilla until well blended. Add fruit mixture and mix with rubber spatula until evenly blended.

There will be just enough batter to cover fruit. Fill cups with scant ¼ cup mixture, stirring often to mix batter in. (Mix will mound over tops)

Bake for 35 minutes, or until a toothpick inserted in the middle comes out clean. Cool on rack. Spoon 1/4 tsp. brandy over each cake. Store in a tightly covered tin at room temperature for 1 month.

Notes:
I may be a bit of a fruitcake, but I'm not much for eating it. This is one of the recipes I have in my collection that is hand-written by my mother, so it is a keeper even if never used. I think she probably made them for Christmas parties.
Posted by Merry ME at 11:15 PM