People who don't Think probably don't have Brains;
rather, they have grey fluff that's blown into their heads by mistake.”
Winnie the Pooh
Even though I'm having some deep thoughts, today I'm feeling like I have grey fluff between my ears! But don't you just love Pooh's wisdom? When all else fails, I feel like I can call on a bear of very little brain to have an answer. Except, maybe, for questions like those that follow.

I spend what I think is an inordinate amount of time at the grocery store. Granted, I break up - which really means double - my shopping trips so I can buy the basics like paper products, toiletries and other things not on my list but I consider gotta haves at a one-stop-shop place like Walmart, and the meat, produce and bread at Publix. It's more expensive that way, but I've learned - the hard way - that giant megastore produce is not the freshest and does not have the same amount of staying power. It could be all in my head, but that's what I've concluded. For example, I bought a really pretty, large, pink, taste-tempting Florida (thus the freshness is guaranteed, right?) grapefruit last week. Alas, when I cut into it I found it was dry and just about juiceless. Since I'm a sucker for pretty when it comes to both my produce and my red meat, I think Publix has won me over for both plus taste.

Since I spend so much time in stores surrounded by food, I have plenty of time to ponder deep food questions. Yet, mostly I mosey up and down the aisles in a food-induced (or lack of food-induced) stupor, relishing not in the plenty but the lack. As in lack of other places to hang out, or lack of friends to shop with, or lack of enough joy to care that I probably look like a proverbial basket lady. Publix is the place I had a major meltdown after my mother died. A song played on the radio that conjured up her face and my loss so I bent right over my cart and cried. Publix is also the place that for the longest time had a fluorescent light that flickered in syncopated time which caused me to have a headache and feel like I was maybe having a brain strain. Most recently it was in the Publix produce section that I felt like sitting down among the fruits and vegetables to take a nap. Don't ask me why. All I know is that while trying to decide whether I wanted curly leaf or romaine lettuce I was overcome with a great lethargy. To be honest, I know the decision was NOT of monumental proportions but when one is struggling with depression, even minor decisions bring on a great desire for sleep.

It is usually in the cold cut department that I ponder great food questions. Why, for example, do the people who stock bacon ALWAYs put it on the shelf backwards? Oh, I know, they want you to be able to read Oscar Meyer, or Hormel, or Walmart on the label, which is very nice, except it tells you absolutely nothing about whether or not the bacon has any meat content at all. The real way to purchase bacon is to look at the meat to fat ratio. (Oh, come one, we all know bacon is full of fat. And yes, we all agree that it is unhealthy and should be strictly shunned, but we also know that sometimes a crispy BLT is the only thing that will satisfy a lunchtime craving.) And the only way to determine this ratio is to peek into the little window that the packagers have inconveniently put on the back of the product. I say inconvenient because in order to see it, you have to paw through each and every package, turn it over, determine the worthiness and, if you see nothing but a big hunk of pig fat, move on to the next. Don't tell anybody, but I've been known to turn over each and every package of bacon on the shelf AND leave them that way. I feel like I'm doing other customers a great service, but I have to ask, have I turned into a crazy bacon lady? Do the people in charge of keeping the shelves neatly stocked come behind me and re-turn all the packages?

Am I the only person who questions why "vine-ripened" tomatoes are called vine ripened when they have obviously been picked way before they've turned anything that even comes close to being the color of red that represents ripeness? Sadly, I have learned that if one actually leaves a tomato on the vine to redden properly they not only crack but they get buggy and become good eats for backyard critters. So why don't produce managers just save themselves the effort of making the vine-ripened sign? We all know the tomatoes were green as Kermit the Frog when they were picked. Who are they trying to kid? [Photo L: This picture has obviously been airbrushed for affect!]

I heard an advertisement the other day for Smart Balance, Omega three milk. Apparently milk no lo

nger comes from cows - even happy California cows. Well, it does, but apparently no one should drink it. According to this ad, a glass of 2% milk has 20% more saturated fat than a small order of french fries. What? I thought the whole point of buying 2% milk was to cut down the amount of fat. And let me ask you this ... if given the choice would you rather have a glass of milk or hot, right out of the fatty grease, covered in salt french fries. At least if you're going to die from a fat induced coma, you'll die without a milk mustasche! [Photo L: Got Milk?]

As long as I'm asking questions that most likely don't have any answers, does anyone know why decaffeinated coffee costs so much more than regular coffee? Seems like if something has been taken away, i.e. the caffeine, then it oughta cost less. But no that is not the case. There must be a high salary demand for the people who pick the caffeinated beans out of the can, thus sending the product cost skyward. If I wasn't caught sleeping in the produce section, or crying in the cereal aisle, or hunkered down reorganizing the bacon, I think I could be caught having a heart attack in between the blue and green coffee cans. Just seeing the difference in price takes my breath away - not in a good way.

Anti Antijen, [of antijen.blogspot.com fame] my fellow blogger and inspiration has written a post today that has left me wondering big time. I have to ask. Why, why, why would the makers of the multi-colored sugary sweet little nuggets of yumalicious candy even consider vomit, booger, baby wipes or skunk scent as possible tastes? Do you think they employ Arthur Slugworth type villians

to do their taste tests? I suppose the real question I should be asking is this - are there people in the world that actually purchase then EAT said jelly beans? But I know the answer before I ask it - Yes. Indeed there are very intelligent, high scoring LSAT takers with big rescuing hearts who freak out at the thought of sleeping with cat turds but don't shy away from photographing them who not only buy but also eat candy that supposedly tastes like snot. I mustn't judge too harshly, however, because these may be the same are people who are not allowed to laugh at breakfast.

Who knows for sure, but I find the questions too deep for this blogger who hasn't had even one glass of caffeinated tea yet today and it's already past high noon. My blood sugar has dropped. I'm beginning to think of bacon.

If you have any other deep though provoking why questions, don't hesitate to share them here.

TaTa for Now,
Merry Me

P.S. One more question and then I'm finished. Who knew you could make cookies from potato chips? 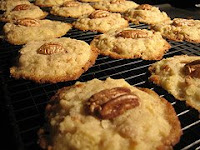 Heat oven to 350 degrees. Cream butter and sugar. Add flour, chips, nuts and vanilla. Shape into small balls. Roll in powdered sugar and press down with a fork. Bake until the cookies appear light golden brown. Makes about 4 ½ dozen cookies.
Posted by Merry ME at 3:06 PM

Once again, your descriptive prowess brings tears to my eyes and a smile to my lips. Thank you for your candor, and honesty.