"To live in hearts we leave behind,
Is not to die."
Thomas Campbell

[Note: I didn't get this post written last night because I was completely stuffed and could barely think. I tried but ended up falling into bed with in a Scampi-induced stupor. me]

68 years ago a man and a woman were married in Honolulu, HA. He was a Naval officer, she was an island cutie with good military lineage. They were young and naive but like most couples who get married nothing else mattered because they were in love. If you look at the pictures of the bride in her champagne colored satin gown holding a bouquet of sweet smelling pikake blooms you can see the promise of dreams come true sparkling in her brown eyes. The groom all decked out in his starched dress uniform, stood tall and straight beside his regal beauty. Holding the crook of her elbow, he supported his bride in a way that eerily foretold the future.
New duty stations mean new homes. The couple lived together and raised five daughters on tropical islands and snow covered training bases. Typical of their generation, the husband went to work and the wife stayed put turning every place they lived - from a Guamanian Quonset hut to their final Floridian residence - a comfort filled home. They melded their stoic New England and hardscrabble Southern upbringings into a union that stood the test of time. Each partner knew what was expected of them and neither dropped the ball. Over the years their marriage, like the food they liked to eat, became a well-managed combination of his and hers. The girl from Vermont learned to prepare cornbread and grits and the Tennessee mountain boy developed a taste for lobster drenched in butter and lemon. Together they shared a love for ice cold martinis and rare roast beef. 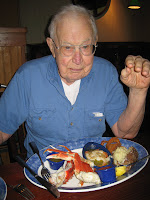 In years past to mark this anniversary we've gone to church, said prayers of thanksgiving and shared Holy Communion. Last night in remembrance of his Hawaiian bride Dad agreed to go to Red Lobster for dinner. After toasting the girl in the pink bathing suit and marriages that last a lifetime, each of us ordered our fishy favorites. Sweetie a fisherman's platter with a nice variety of seafood delights. I settled on Shrimp Scampi (no surprise there). Dad went all out and ordered the Ultimate Feast - a combo of crab legs, lobster tail and shrimp. It was more food than I've seen him eat in a long time. But the size of the portion didn't phase him; he took his time eating, savoring the taste and his memories. As he ate, my normally taciturn father, freely shared tales about times gone by. Sweetie and I delighted in watching as the act of remembering turned a grumpy old man into someone who who was once again young and naively happy. As much as I enjoyed the scampi I have to say the real treat of the evening was watching my dad dive head first into a meal that spelled L-O-V-E. The meal wasn't sanctified, but I believe it was holy. Love, gratitude and remembrance, after all, are the main ingredients of the Eucharist.
Wishing you all your favorite foods swimming in butter and drenched in love,
Merry ME
Posted by Merry ME at 9:30 PM

I wish I had been there. I love when he loosens up and starts talking from his heart, retelling the memories that are so dear to him. Ummm, I'm hungry. lg

What a wonderful tribute post to your parents marriage. And how happy your Dad looks in the picture. Sounds a truely memorable night.And a blessed way to remember your mum.
xx