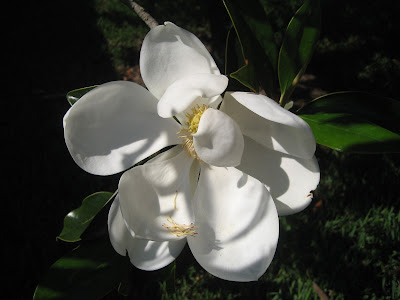 For some reason I can't figure why Florida's southern Magnolias are just beginning to bloom and Pennsylvania's pink magnolias have finished blooming. All the flowers I've seen have been way up high impossible to photograph. But right outside the gate to the nursery office sat this beauty. I hope Sandra didn't see me stopping to take a picture, or she might have noticed that my battery was in upside down so it wasn't working. She might have rolled her eyes and said something like, honey, just turn it on.
me
Posted by Merry ME at 6:29 PM

First I cried, and then I laughed. Sounded like you were reading a page from my life! Thanks!

oh, this makes me remember letting go of my granddad. you're doing good, Merry.

oh mary....passin my flashlight your way. we can curl in together and share it.......

Watching the life slowly ebb away sucks. Being frightened of them not being there sucks.
Being overwhelmed with dealing with it all sucks.
But love will keep you going through the dark nights, I know.
xx

Would it be so awful if you lingered among the shelves and counted the candlesticks while Sweetie made the first trip into Dad's room each morning?

I think you're supposed to want to keep your Dad -- for as long as you possibly can! The only way to help him at this stage of his life is to choose to be "both feet in," and that brings you very close and feels very vulnerable. You're doing great...your compassion shines through in your words.

Thanks for the posey! Ours are long-gone.

Once again I'm crying as it brings to memory my own Father and his year long departure from this world.

Mary, I wish I had wise words but there are none...only to say embrace it all. You are already wise and knowing and I think you are brave and courageous too. Grieving begins long before the body leaves and perhaps what you are witnessing and experiencing are small miracles...look at the closeness you have with your Father now that just a short while ago had you in tatters...
Each Sister here has you wrapped up in Love...that connection which brings us all together...and I'm sending you mine right now. For those times of doubt and fear, anger and happiness, whenever you may need it. Listen to your heart Sweetness...it won't steer you wrongly, you can hide if you want to or be as brazen as a bright orange flower.

Mary - beautiful posting about the love of a daughter and her Daddy. God gives us light so we know dark, sickness so we know health, and daughters to know the strong and special love of of our Daddys. xxoo

It's hard to see a loved one leaving you. I felt your turmoil. But God is merciful and gives us some good times to hang on to, like plant shopping with your dad. You saw beauty there,and will remember that.
God bless.