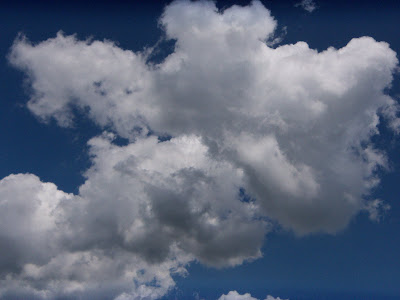 I wasn't going to write about 9/11 today. Partly because between the "media" and the blogosphere I doubt there is anything else that can be said, and partly because even though I am a go-with-the-flow kind of person, I do have a stubborn streak in me (handed down on a silver platter by both my mother and father) that kind of likes to step on the brakes and turn in a completely different direction from the flow. For instance, if I were a salmon, I truly believe that as important it might be for me to join my other salmon school mates swimming upstream to salmon nirvana, I think it would be a whole lot easier to let the natural current take me to places my buddies might never see.
But in her blog this morning my friend Amy said it would almost be disrespectful to write about anything else besides 9/11. I get that. And while I might be wrong-way-Sally, I do not want to be disrespectful to the people who are still feeling the tremendous loss of that day. I'm reminded of what my therapist told me about my grief journey. That one of the things that died when my father took his last breath, was my little girl's ability to hope. I think when those planes hit the twin towers hope died , along with the all the lives, and 10 years later we're still trying, individually and collectively as a nation, to find it and/or redefine it.
"Hope that thing with feathers that perches in the soul"
Emily Dickinson
Like everyone else, I remember that morning well. The second plane was taking aim at the buildings about the time I wandered downstairs to see what was going on. My mom sat in her chair, dressed in her blue velour robe, the coffee cup (a white mug with a rim of tiny blue flowers ) sat on the table next to her. The TV was on. Dad sat at the kitchen table reading the newspaper, oblivious to what was happening in the world. I remember my mother's eyes that spoke of horror, terror and disbelief. My mom's eyes twinkled when she was happy, turned black as the Devil's henchman when she was angry, and when her world was threatened Mom's eyes showed fear even if her body withstood the storm without bending.
I remember, too, the phone call from my son who was stuck in traffic only a few blocks from the Pentagon. My big, strong, unemotional, take-no-prisoners son who called "mom" and cried when he thought one of his best friends was on the plane that crashed in Pennsylvania.
As in all the other homes and businesses and schools across the country, our TV was left on and even though what happened was too horrible to believe we kept watching as if the talking heads might say something that would suddenly make sense. However, once the news stations started the repeated showings of the planes, the explosions, the cell phone recordings and the faces of evil, I had to cover my eyes. Then I had to leave the room. Then I had to say, "la la" in an effort to protect myself from the insanity of it all.
Call me an ostrich, but today I don't feel much like remembering. I don't want to hear from politicians whose words, no matter how heartfelt, are going to sound like the well-written and rehearsed political rhetoric they are. I don't want to hear from the people whose hearts are still hung with the black mantle of grief. I don't want to give hate-filled Americans another platform for deriding another's religion, color, sex, or choice of sexuality. And I sure don't want to hear threats against our country from bearded zealots hiding out in middle Eastern mountain ranges. I don't want to hear the cries of the families who have lost sons and daughters, husbands and wives in a war that has lasted for the ten years. I don't want to hear the wails of mothers whose babies continue to die.
It seems that Americans are good at rallying around a "Remember" slogan. And I agree it's good to remember. It's good not to forget and be prepared so whatever it is that we're not forgetting doesn't happen again.
Remember the Alamo
Remember the Maine
Remember Pearl Harbor
And now ... Remember 9/11
As today draws to a close, however, I'd rather look forward rather than look back. I'd rather people step on the hallowed ground where memorials have been built and say a prayer for peace. I'd rather politicians get back to work and fix our healthcare system so first responders can literally breathe a little easier and not have to worry about what it costs. I'd rather every veteran who has ever served his/her country be welcomed home in style - brass bands playing, people waving and ticker tape falling like rain - instead of in flag draped coffins. I'd rather people around the world reach down to help someone up. And I'd rather go to sleep tonight with a new kind of hope instead of fear.
Today I AM grateful for the American spirit that rises up when our homeland is threatened. I'm grateful for a home that hasn't been rocked by mortar fire. I'm grateful the men and women who lay under precision rows of granite markers in National Cemeteries all around the world. I'm grateful to a Mysterious Master who still breaths life into new babies even though this planet is kind of wacked out and bent on destruction. May the day come when we realize the heart of the same Creator beats in us all.
Koombaya,
Merry ME
Posted by Merry ME at 8:16 PM

I'd rather be looking at what kind of person I am today, thinking of whether I can be DIFFERENT than anyone who was destructive, and doing my best to be a role model for what kind of behavior I'd like to see as prevalent in the world.

What matters is who we become, even more than what we went through.

Grief can be endlessly deep.

Being committed to hanging on to it year after year solves nothing though.

You can remember while moving forward, and transmute a personal or collective pain and loss into positive choices for today.

If something horrible happenned to me, I'd rather see my friends and family, etc. living a life of kindness and joy ten years from now instead of being stuck in negative emotions that don't change what happenned one bit.

Remember yes. Be a martyr who lives with the shadow of bitterness and resentment, stuck in emotional angst that says your pain is worse than anyone else's, or exploit it like the politicians do - no.

Dear Merry,
Thank you. This is thoughtful, and thought provoking. Your writing inspires us to look into our own thought processes, and what we do with them.

911 was a horrifying day. I remember crying for weeks after that day, horrified by the turns human-kind began to take.

This day I reflect upon the internal state of affairs. I pray and meditate. I garden and read with my granddaughter who, on any given day, may not be able to read because of her seizures. I make gratitude lists because the list-making centers me firmly in Love. Which grows a beautiful day.

Merry Merry You (or, I guess I should say ME) - I had repeated goosebumps while reading this.

At first I was giggling through your description of the stubborn streak (I've got that same darn thing - and have even caught myself doing the opposite of what I actually want, just to not follow with the other salmon)...

then I was nodding (and goose-bumping) along as you told about your experience (and your son - I thought of mine) and goosebumping more as you described what you wanted to see and remember (which is so different from what it appears that the media and mainstream want).

Then I was giggling again - at your signature - the Koombaya just made me smile!

Thanks so much for this -- your writing grabs my heart!

I can't blame you in the least for NOT wanting to remember. It was a horrible day to live through, even worse when you know someone who was closer to it, like your son.

People remember things and grieve in their own way, and one of those ways is to celebrate life. We honor those who have passed by looking to the future, and living life again.

I was pregnant with M3 when it happened, so I was already a hormonal mess. The next month or so was horrible. I don't ever want to feel that way again.

And also? Your family tree wall kind of ROCKS. I love it!

I'm with you in totallity on this one Miss Merry...

I love you Woman!
xoxoxo