I've told you about my friend and writing buddy Amy before. She's a cool lady. Funny, gutsy, and in my opinion, just a little bit crazy.  She'd probably probably prefer the word adventuresome to crazy. The girl who rode her bike across Europe for 6 months alone is the same girl who encourages me to take a leap of faith, mix things up a little, embrace change, get up at 4:30 am to write 300 words, or rent that motor home and drive across the country writing blog posts like I'm the woman's version of Charles Kouralt. Much as I love entertaining some of her wacko ideas, I know I'm just too chicken to actually do them.

I think that's why I get such a kick out of watching her do things. Amy shows me a side of life I'd only see on the news, and opens my eyes to what life is like from the perspective of a wheelchair  and how it feels to rely on the kindness of others - sometimes for help into a bathroom stall, sometimes to push her across a sandy beach, sometimes to read her stories in front a crowd.


Take yesterday for instance.  While I kept my lazy ass in bed, pushing the snooze button every 8 minutes while awaiting Amy's phone call, she was up (probably before the sun) preparing to go surfing. Yup, I said surfing.  As a part of the Christopher Reeves Foundation, Life Rolls On, came to town for  give disabled men, women and children a taste of sun and surf (in Amy's case, a few face fulls of salt water) For the 6th year in a row LRO hosted They Will Surf Again at Jacksonville Beach. They had their biggest turnout ever of surfers, volunteers and sponsors.  I suppose if one is in the middle of a group of psyched up people about to do something new, kind of scary, a little bit dangerous, and a lot of fun, it's not hard to get caught up in the excitement. Before the surfing began, there was all kinds of whooping and hollering. I was one of the whoopers!

It was a beautiful day. A good reminder of what the world looks like in the hours before noon. I haven't been to the beach in months. I love swimming in the ocean, but I have to tell you, reports of shark bites in knee high water scare the fun of it right out of me. Not so for the hundreds of people who were there to help people with all kinds of disabilities get on a surfboard, go out beyond where the waves break and wait for the perfect ride. Amy got several good starts, but kind of rolled off to the side before really getting a good ride.  Volunteers were in front and back of her surfboard, and lined the sides. One group was there to catch the surfer in case of a fall, the other to catch the board.  I couldn't see a lot of Amy's attempts because of the volunteers, not to mention I was trying to take pictures (with a zoom lens) while standing on the shore at that place where the waves meet coming and going and kind of suck the sand out from under your feet, not to mention keeping my eyes peeled for a circling dorsal fin. Da Dum. Da Dum. 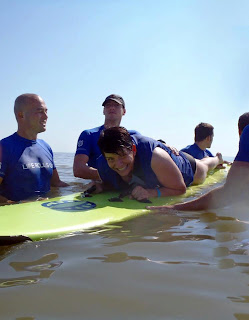 After about 5 tries, my beautiful, brave buddy sailed across the top of a small wave right into the shore where she did a bit of a flip. I gasped, but saw how well trained the "catch the surfer" team really were. When Amy was back up on her board, encircled by her group, she smiled that kind of smile people get when they've succeeded. You know the one that spreads from ear to ear and says, "Look Ma, I did it."

I don't know what Amy's gong to do next. She won't sit idle for long. Finishing her memoir (at nine words a minute) is a high priority. Seriously the woman inspires me and makes me tired at the same time.  Go check out her blog. You'll be glad you did.

Wishing for you a opportunities to try new things.
Merry ME

Thanks for your flattering comments my friend! And yes, I much prefer the word "adventuresome" to "crazy." Being nice to me doesn't mean I'm going to stop trying to get Confident Mary to come out and play! I think for my next adventure, Mr. and Mrs. Hard Body are taking me kayaking....no sharks!

What a spectacular day - I think the best friends are the ones who inspire us to greatness and doing mind kicking us in the bum to get us there!