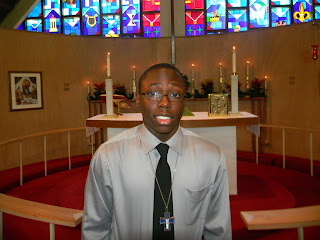 William is a young man at church that I have watched grow from a toddler to semi-adult. He looks and acts pretty grown up but his birth certificate only puts him at age 18.  For as long as I've known William his life's dream was to join the military. My dad used to worry that none of the services would let him be a pilot because of his eyesight. And he worried that William's dream would be for naught.  But overcoming obstacles is the stuff making dreams come true is all about. With a little determination (okay, a lot of determination) William's military dream is just over the horizon, almost close enough to touch.

In high school William joined the Navy ROTC. That's when I first noticed how the boy was being shaped into a man. He stood a little straighter. He wore his uniform proudly in drill team competitions. Like his shoes, which glistened, his rifle was always clean and polished.  (Do high schoolers get real rifles?) I'm sure when he was with kids his own age, he relaxed some. Around adults William always had a "yes, Mam" or "no, Sir" at the ready.

William started coming to church when he was a just a baby. He would sit quietly with his Dad, never making a sound. As he grew up I helped train him as an acolyte. In recent years he has led the procession into each service by carrying the cross.  When I saw him stand at the altar next to the priest, I didn't see a soldier, I saw a man of God. Disciplined, respectful, poised, filled with light that shone from the inside out.

Yesterday was William's last day at church for awhile. At the end of the week he leaves for Perris Island, South Carolina, for basic training in the Marine Corps. He signed up last year and like a horse in the starting gate he's ready to burst forth and run full speed ahead into the life he's dreamed of.  If there is one thing I can't abide it's a dream crusher, so I've had to keep my mouth shut. My heart aches to think that William will come home from boot camp, dressed in cammies, and ready to do what Marines do.  I can't bear to think of William in harm's way.  If it were up to me I'd surround him (and most kids I know) in bubble wrap and keep him close to home. I'm sure his mother has had that thought more than once. But like his mother and father, the people who have watched William grow up, must trust that the Almighty Drill Instructor will cover him in grace.  We must trust that he will take the lessons he's learned in his short life and meld them into the ones he's yet to imagine.  We have given him roots and we must now give him wings.

I use the plural pronoun "we" loosely. His church family helped but it was William's parents who molded his character.  They led by example. William is not the first of his siblings to be in the military.   I believe that the God of peace and love will calm their nerves as they kiss William goodbye and send them into the world.  I also believe they are going to need a big box of tissues and lots of prayers.

I've tried to think of some good advice to give this young man before he leaves. My standard words of wisdom "don't talk to strangers" don't seem to fit the situation. So I think I'll say:


Today I give thanks for the privilege of watching William grow up. I am grateful for his willingness to serve our country.

Those are 8 great peices of advice for William, and very thoughtful and helpful of you to pass along to him. He sounds like a really nice young man.

It is heartbreaking how innocent kids are when they join the armed forces, and the deceptions that the military embraces. I love my country and am proud of those who serve and grateful to them. But for many, the near poverty, the horrible traumas (physical and mental), and the way they are so often virtually ignored and not properly helped when they get back home after months and months of bureacratic paperwork and denials and lack of facilities is so disillusioning.