A Magical Journey on a Summer Afternoon

[Note: This post is kind of long. Grab a cup of tea and read on. me]

At the end of May when my writing group, Le Chat Noir Writers Circle, broke for summer vacation, our leader gave us an assignment. She had us make a list of things we'd like to do or have happen over the summer. From there she had us revise the list to include sensory details.

For example, one of the things on my list was "take Gracie to the beach," which could be dressed up by saying, I want to "feel the sand between my toes as Gracie and I walk into the shallow waves."

Instead of just "reading a book I can't put down" I wrote I want to lose myself in the words, the time and place of the story."

Rather than say, "I want to float in the pool." I wrote, I want to let the cool water caress my body on a hot afternoon, or I want to be lost in the womblike silence under the water.

You get the idea.

When we meet again in September, we are to bring our lists report back to the group how many of the things we actually did. The theory being that by naming a desire we give it power. I'm embarrassed to say that we are nearing the end of July and I haven't done any of the items on my list.

In her latest book, Magical Journey - An Apprenticeship in Contentment,  Katrina Kenison* writes about the death of a very good friend, facing the emptiness of her nest as her two sons move away, growing older and moving into another relationship stage with her husband. As she spent time by the bed of her dying friend, Kennison wrote that "watching Marie struggle to accept how much she was losing, I began to appreciate all that I had." This observation led Kennison to "capture what was and to transform the past into something alive in the present" in her writing. "I was finally taking time in the day to stop and pay attention to the small moments, the smells and sounds and textures of my own life. I couldn't halt the flow of time, but I could remind myself to appreciate our days together by paying closer attention and by putting words to details I might have brushed right past before."

As in Kennison's previous books,  Gift of an Ordinary Day A Mother's Memoir, and Mitten Strings for God the author tells how she (re)discovers the sacred, joy and beauty in the midst of her hectic days as mother, wife, and author. She talks of slowing down and "being present."

This is what I wanted to do when my daughter, son in law, granddaughter, granddaughter's boyfriend, great-granddaughter, and even my X-husband came to town. I wanted to pay closer attention and embrace the joy. I don't have these people around very often, so I wanted to take every moment and turn it into a memory. Thinking about it, I realized I didn't really know how to be in the moment. Seems like I'm either looking behind, or rushing forward.

It's been awhile since Weneki and I had spent any time together. When planning her trip, Mom/daughter time was near the top of both our lists.  While I looked forward to getting to know my new son-in-law, and play with Gracie,  mostly I just want to be with Weneki and soak up the essence of her. When you live 3000 miles away from your very busy daughter, you miss out on a lot. As with Robert,(see previous posts) I can tell you lots of stories of when Weneki was a child, a teen, a college student, a wife, a widow. But I would be hard pressed to tell you about the woman she is now. I can list her accomplishments, but I don't know her newest goals and dreams.

To spend a whole day with her was a magical journey, indeed. I introduced her to a 1905 Salad from the Columbia house, made right at our table. I ate bread slathered in real butter, while she stuck to her no-carb diet. Like the food, time seemed to disappear. When it looked like our waitress wanted us to move along we decided to walk off the calories we'd consumed. We had plenty of time on the imaginary meter cause apparently we paid for free parking.  Following a tourist map through the streets of old St. Augustine, in the ungodly mid-day heat, looking for a tree couldn't be too hard, could it? We counted several trees that had probably stood sentinel over the Spanish settlement for hundreds of years, but we saw nothing that we would call a Love Tree. What exactly does a love tree look like?

A few minutes in 90+ degree temperatures with a dose of humidity thrown in for good measure, we'd pretty much decided a tree is a tree is a tree. At one point, I started to ask a gent with a long grey ponytail if he knew where the tree was. Since he was sitting on the steps of the house where the "Ghost Tour" began, and looked kind of grumpy, we decided to keep walking. Finally the heat got to us. We gave up our search, turned down an alley and headed for a coffee shop that promised cold iced tea.

"You don't by any chance know where the love tree is?" I asked the barista.

"Yes," she said as she pointed down the alley in the direction we had just come. The direction of the ghost tour man. "You can't miss it."

Cold drinks in hand we braved the heat and headed back. There were still no signs of the tree we were hunting. We walked on, rounding a corner and walking through a parking lot. When we saw the sign that said "Love Tree Cafe" we had a sense of what Ponce de Leon must of felt like when he spied the fountain of youth. We stood under a rather large specimen of a tree and posed for a picture. There was nothing about this tree that spoke of love, but what the hey, we'd found it. Right?

Wrong! We followed hand painted arrows around the side of the clapboard house. As we rounded yet another corner, we stopped in our tracks. There it was - the real love tree, right next to the stoop where the scary man had been sitting.  This is the kind of mother/daughter story that makes for good laughs and not so good pictures. Even now, I feel a giggle working it's way up into a full on chuckle. 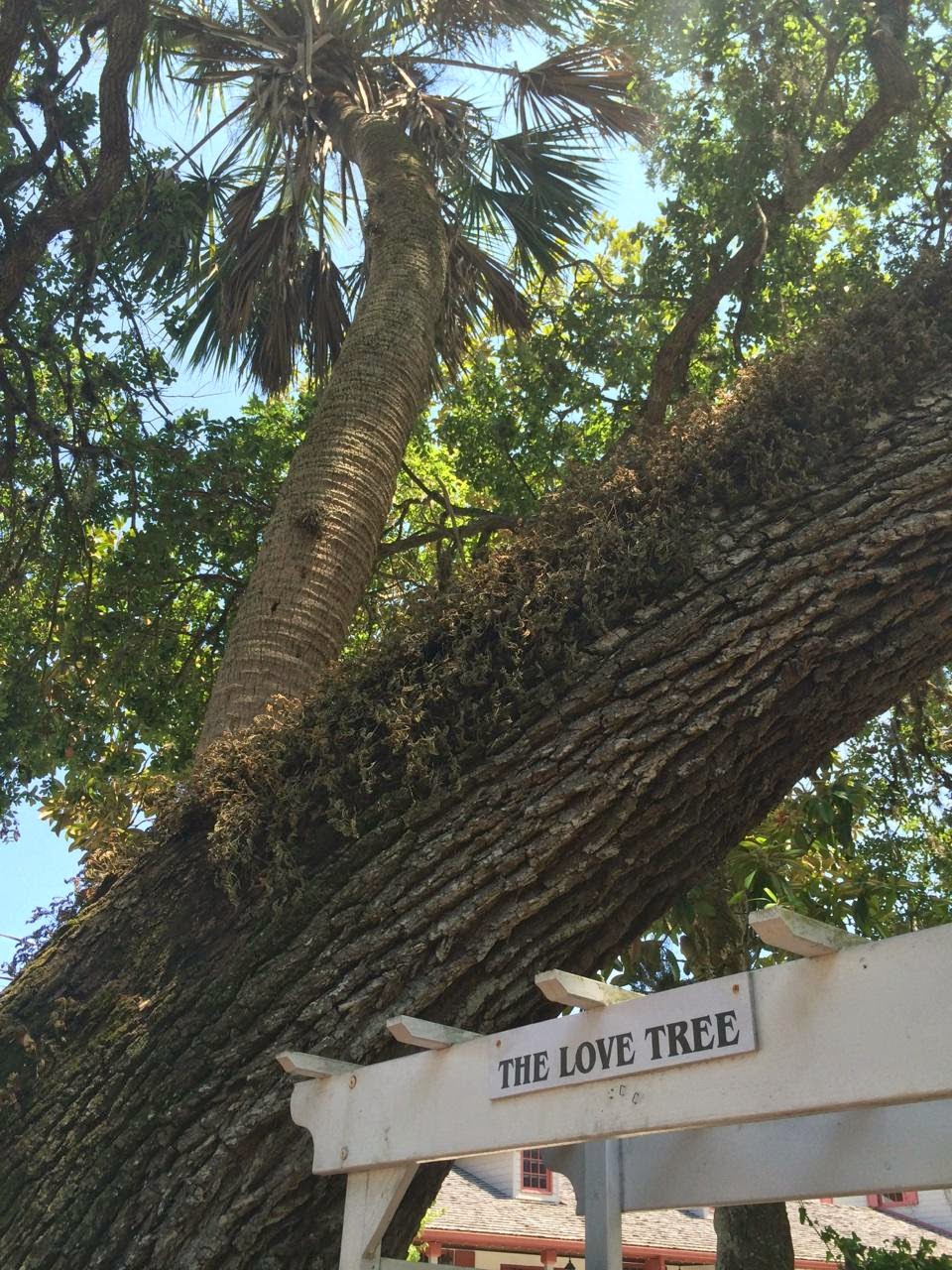 We spent the rest of the afternoon sitting next to the hotel pool at a table covered by a bright umbrella, catching up with each others' lives. We talked of work and of play, of moving and of staying, of old friends and new, of things that come naturally after the ice has been broken.

Stepping out of the moment, back into my head, I tried to take mental selfies. The bird sitting on the pool steps. The throat puffing lizard. The smile on my girl's face, her hat, her bright orange shirt, her polished nails, her earrings.  That's when I figured out, you can't be in the moment and memorize the moment at the same time.  The best memories, I guess, are engraved on the heart, not the brain.


What's on your list of things to do this summer?
Where will your magical journey take you?
Merry ME

* Magical Journey: An Apprenticeship in Contentment by Katrina Kenison, Grand Central Publishing, 2013. [Do yourself a favor and buy this book. You'll be glad you did. me]

* The Legend of the Love Tree:


According to folklore, a man and woman loved each other dearly. To express their devotion, they planted two trees at the same time. The woman planted a palm tree, which was sturdy and able to withstand the most violent storms. The man planted an oak tree, representing flexibility and protection. Over time the oak tree wrapped around the palm, protecting it.
Posted by Merry ME at 10:35 PM