Lately it seems as if Sweetie and I are competing to see who is getting older faster. It's not a conscious race, yet both of us have run up against some aging roadblocks. Memory loss and back pain being the biggest bugaboos.  Trying to get to the bottom of both these conditions has forced us to accompany each other from one doctor to another. In every office it is the same … check in, wait, fill out paperwork, wait, get on the scale, wait, have your blood pressure taken, and wait until the doc du jour walks in with a fake smile and sits down facing his computer, not you.

A few months ago Sweetie came to me with deep concern and mounting fears that his memory loss was more than just forgetting where he put his keys or glasses. He'd read the symptoms of dementia online, and deduced that he had all of them. There are times in a relationship when you can laugh at your partner's hypochondria, (it takes one to know one) but this was not one of those times. I jumped on board and agreed he needed to see someone who could diagnose his condition from the benefit of experience and school, not the computer.

To his credit, Sweetie's primary care doc, took a few notes, then sat squarely in front of his patient and laid out a plan. To begin with he explained that every one of Sweetie's symptoms could be attributed to sleep apnea and for that there is an easy fix. Well, easy for the person who doesn't have to sleep with a CPap machine. Still, a CPap is better than booking a room in the local assisted living home. The next step was to see a neurologist. I'm grateful that this man not only asked the questions, he listened to the answers. Before running Sweetie through a quick assessment he reiterated the fact that sleep apnea could be the memory stealing culprit. Then he asked Sweetie things like  What's the date? Where do you live? Repeat these words - house, flag, dog. Draw a line to the left of this circle, and so on. Near the end of his questions he asked Sweetie to repeat the three words. Damn, if the man who feared he was losing his mental capacities did score 30 out of 30. While I, on the other hand, began to squirm in my seat, because I didn't even know the date. Crap, maybe I have dementia too. Then what?

From there Sweetie went to a lab run by Dracula and had an MRI. He had an appointment with a psychologist to whom he repeated the whole story. He is still waiting for a second psychological evaluation, a PET scan and a final visit with the neurologist who will hopefully tell us that Sweetie's memory loss is the kind that all of us experience as we get older and to run, not walk to the sleep doctor. A CPap machine may not be a magic cure, but it could be the next best thing. 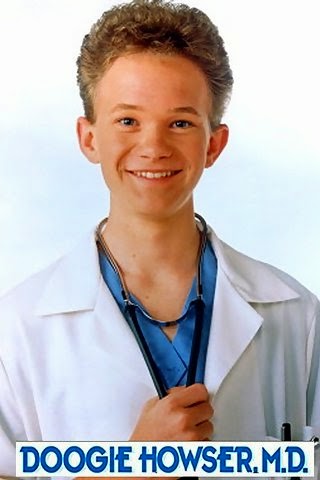 I noticed a few things as we traveled this road of doctor's visits. 1) With each appointment I could see Sweetie relax some. He'd laid aside some of the stressors in his life, which helped a bunch. I think turning over some of the worrying to me helped, as well as being proactive in his own treatment.  2) All the specialists out there resemble Doogie Howser. Seriously, these kids look like they still have a curfew at night and need permission to use the family car. How is it they have not only graduated from college and med school, they have their names painted on their office doors in gold letters? 3) When I am the patient, my usually calm demeanor can turn on a dime. I don't vent til I get home, then lay all the pent up angst on Sweetie while I stuff cupcakes in my mouth. However, when Sweetie is the patient, I remain clear headed and empathetic.   Last week after Sweetie complained about the young doctor he'd just seen, I pointed out that perhaps young doctors are better because they are freshly out of school and had all the latest training.  "You're an insufferable …." Sweetie said.

"Yikes" I thought to myself, this isn't going so well when he finished up the statement "…. do gooder."
Sweetie probably still wanted an opionion from Marcus Welby but at least he was smiling. Sometimes being insufferable isn't a bad thing.

I admit, when Sweetie started worrying about memory loss, I became hyper vigilant about remembering things. Let me just say, short term memory is not my strong suit. But I have had other things to worry about. My back has hurt for over a year. What started out as a mild ache, turned into some major pains over time. My doc ordered X-rays which told him, "you have a little rust" in my bones. What? I'm some kind of old Chevy that needs to pay a visit to Macco? Apparently rust is not uncommon in the back, hips, elbows, shoulders and knees of people "my age." I'd take a prescribed dose of prednisone, the inflammation in my back would go away and I'd experience some glorious pain-free* moments. But the pain always came back. Each time with a bit more vengence.

So I went to see an orthopedic doc in May. He prescribed physical therapy to "strengthen my core." He said, along with learning not to bend over, but bend with my knees to pick up babies, I should keep the pain at bay, but the "rust" probably wasn't going away.  I did everything the therapists told me to do. I stretched morning and night which really did help. I'll never have abs of steel but I could feel my stomach muscles coming around. Then I'd have a set back. Walking too far with Bella or sitting too long while sewing or traveling had me stooped over like the witch carrying an apple to Snow White. This would led to more prednisone and more stretching. About the time I was ready to be released from therapy something happened. Nobody knows what, maybe the way I sat, or stood, or slept or stretched. Pain shot through my back, across my hip and down my leg. I opted for an MRI and an epidural injection. Let's hear it for epidural injections. The pain subsided almost immediately. Woohoo!

While at Robert's graduation I noticed that I walked funny, with a limp. I also stumbled into things and couldn't feel my big toe. When I pointed this out to the therapist, he looked alarmed. Something was definitely not right. Long story short, a second MRI showed I have a herniated disc, which after much consultation requires surgery to fix.

Which brings me to tomorrow. My surgeon, Dougie Howzer's younger brother, assures me he knows what he's doing. I couldn't help but notice how steady his hands are. But then they probably get that way from playing computer games and texting his mother.

I can't speak for Sweetie, but these experiences have opened my 60-something my eyes. I've learned that:
Merry ME
Posted by Merry ME at 6:28 PM