Fun With Jack and Merry 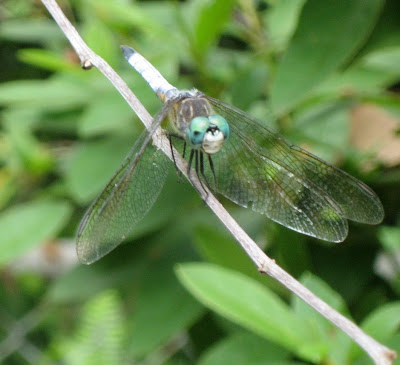 "Using its ability to transform colors and lights
by reflecting and refracting them the Dragonfly shows us
that life, like light, can bend, shift, and adapt in various ways,
making life's appearance never be what it appears to be."*
The oak blossoms have finished falling and temperatures are rising. Sweetie is spending less time cleaning the pool (although it is a never-ending job) and more time in it. I think he has been adopted by a dragonfly.
He called me to quick come out to the pool, to bring my camera and to be very quiet. As if working for the National Geographic, with every ounce of stealth I could muster, I crept up as close as I could and started snapping pictures. If I had a more elaborate set up I feel sure I could have done this little fella, who was sat quite happily on an azalea limb posing for all he was worth. He eyes were a lovely shade of turquoise. His wings translucent and sparkly. His tail was a light blue. But in almost ever picture I took, with or without macro feature turned on, with or without zooming as close as the lens would zoom, it was difficult to tell which was the limb and which was the bug.
If I got to close, he flew off. He'd circle the pool a couple of times and come right back to where Sweetie was standing waist-deep in the water. I think perhaps my red shirt was less appealing than Jack's hat.
A brief interlude in the middle of a manic Monday was just what the doctor ordered. The dragonfly was amazing to watch. But even more so was seeing how tickled my true love got every time his buddy flew back around. One time it even seemed to hover at eye level. Blue eyes to blue eyes communing in an ancient language?
I kind of feel like I'm getting messages today from an unknown yet all-knowing source. Pam's river stories for grown-ups which I read last night, and Akasa Wolfsong's gift of a fossilized stone tell me that life is on-going and continuous. Humans need to take notes from trees, rivers, and even the stones, to learn how to take care of this planet. The dragonfly reminds me that life is not stagnant, does not stand still. Like a river, it ebbs and flows, circles back on itself becoming something new as it goes along. Always changing ... ever becoming. One day maybe people will get the message.
And no doubt a big part of that message has to do with love. It's hard to tell in this picture but the smiling man below, the man of my dreams, the one who makes my heart sing, tells me he is smiling, so I believe him! And you might notice the new hairdo without the help of "product". It is my au naturale look! Alas, instead of my head sweating I've developed a case of under the boob sweat. I thought maybe you'd like to know that! The pool sure did look inviting! 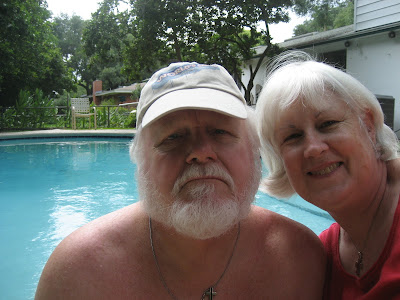 Wishing for you a chance to see nature at its finest. You might have to look close and fast, but try not to miss it,
Merry ME
*http://positivedailyaffirmations.blogspot.com/2009/07/dragonfly-necklace-jewelry.html
Posted by Merry ME at 4:11 PM

I love that you put your Brave Girl quote on your blog! Good for you!! ;o) Good for all of us who read it!!

To everyone who reads these comments...the interesting part is that the same dragon fly actually showed up at the pool yesterday. It flitted around, landing here and there but not so long as to become a photo opportunity. Several times today it took flight and then returned either to the same branch or somewhere close. Mary remarked it was as if he wanted his picture taken. I'm assuming of course that it was a he. Olde scrunchy face.

Mary, that is an AWESOME photo! He looks like he'll fly right out of my screen! Look out, National Geographic! So glad he and Jack have found each other!

Stunning Photo's both of Dragonfly and Mary and Sweetie! :)

I love your haircut Mary...really love it!

Your Dragonfly friend is indeed speaking to you in Ancient Language...I've had many experiences with them by my pool. They will bedazzle, and beguile you and I know they recognize us once they see our face!

All about Illusion this lovely ancient creature! And you are so right in that the Earth and Her Inhabitants can teach us what we need to know or ever cared to!

Blessings Dear Heart...I am sitting here sweating under my boobs too! Ha Ha Ha...must be a condition of older gals, eh? I don't remember doing that when I was younger!

Ah well, have a wonderful evening!
I love you so!