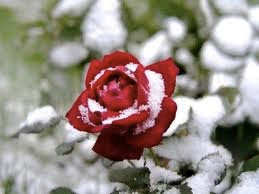 “Happy are those who sing with all their heart,

from the bottoms of their hearts.

To find joy in the sky, the trees, the flowers.

There are always flowers for those who want to see them.”

Some people on the north side of town saw a few snow flakes falling a couple days ago. All I've seen are the sad and droopy, i.e. frozen, bushes in our yard. I shouldn't complain because lots of people know the real meaning of cold when all I no is the wimpy, whiny version. When I look at trains and planes and automobiles stuck in snowbanks I've got to admit the seat between Dad's bed and his fake fireplace heater is something I don't dare complain about.

There is something pristine, almost sacred, about newly fallen snow. It gives a kind of glistening luster to most everything it touches. In my book, however, the icy beauty diminishes proportionately as the snow banks grow higher.

Like the time we lived in Patuxent River, MD. My then husband was attached to a training squadron that deployed to the Bahamas for mock drills of a military nature. Personally I have always believed the drills were all too coincidentally set according to predictions of snow in the Maryland area. I can't prove this theory but it did occur with surprising regularity that the planes were out of town by the time the first snow flakes fell.

My kitchen window faced out to our backyard where a rather barren looking clothesline stood like a sentinel guarding the bleak winter landscape. On the morning when my husband was preparing to deploy, I was looking out the window, undoubtedly fuming. In came hubby who tried to make light-it's-not-going-to-be-so-bad-I'll-be-home-before-you-know-it chit chat. I wasn't buying it and my shoulder might have been as frigid as the clothes pole. "Look," says the man who was leaving me yet again but forgot to put his smile in his pocket until he left. "It's a snowbird."

"What the hell is a snowbird," I questioned not really expecting my husband to know one bird from another.

"It's kind of a precursor to snow," he said with authority. "When you see one, you can usually count on snow."

"Yeh, right," I thought to myself. "And when I see a leprechaun I can expect to find a pot of gold."

With the benefit of hindsight I realize I did not always send my helo flying husband off to do his duty with the kind goodbye that I should have. And I sure as hell never lapped a window's walk waiting for him to get home. I had two kids to care for which, when he was gone, felt to me like 20. On the other hand I was always glad to welcome him home, even if it was to hand him a tool so he could fix whatever inevitably broke when he was gone.

Off he goes to the Bahamas. Down the snow begins to fall. And fall. And fall. That damned bird was nowhere in sight. I dare say it had probably flown south along with the helos.

He often started the phone conversations with something about the weather. It was warm, or sunny, or beautiful. Then he'd follow that up with a report of the activities he had engaged in. He'd played tennis, laid on the beach, gone drinking with the boys, been duty free shopping. Somewhere in there he'd mention a sortee or two. Maybe I just had a bad attitude, but it always seemed like he played harder than he worked.

On this particular trip, when he called to tell me about how his new tennis racket had perfected his game, I mentioned in passing that his prized possession, a sporty little red Fiat, was under a blanket of snow. As in you can't see it because it is completely covered. In my mind's eye I can still see that big snow pile with nothing but an antennae sticking out of it and kind of smile at the way Mother Nature has with paybacks.

Geez, I don't know where that came from. What I had intended to say was about the quote I read on Jon Katz's blog which, of course, is full of snow pictures. It made me think of several of my blog friends who are able "to find joy in the sky, the trees, the flowers." They are the kind of people who even though their lives are not pain (or snow) free, they choose to look for flowers.

I haven't been outside much lately. My field of vision is the room where my father lies waiting to die. Some days I don't see anything but the bedside commode, or the stack of dirty laundry. Today, I had a kind of calm about me and saw, not the old man whose words can cut like a knife but a man who is weakening and losing his fight. I approached him with a different attitude (not sure where it came from) and let the time pass rather quietly. His final days are the flowers I see in our relationship. I also saw, on one of many trips to and from the kitchen, my Sweetie who, like the lonely clothes pole, stands guard over the parts of the house I haven't seen in days. His smile is the flower I see when I walk by. And when I read emails,blogs, and Christmas cards from people I've never met or talk on the phone with sisters/friends who share my journey, I can almost smell the heavenly scent of lavender roses. Bless you all.

Wishing for you a bright bokay of flowers to fill your snowy day with joy,

i think it's so cool you used to live in my neck of the woods! and that bob worked where your ex worked......i really think that's cool. even if all the memories aren't so great...it's still a neat connection.

just walked in from my mailbox where i placed a snail mail card for you. then sat down and read this and smiled....you're doin' way good, mar.
even if you don't know it.....
you really are....

Over here we've swaped snow for grey mist. And is it wonderful! I can go out without looking like Scott of the Antarctic. Still need gloves and warm coat,but no muffler and hat.So my December flowers are actually the sodden but green grass, the piles of autumn leaves that have been buried for weeks in the snow. And the chance to breathe outside without it hurting.
xx
hop you got my snail mail Christmas card

Mary, You don't need to look for the flowers. It's obvious they're in your heart. God bless.