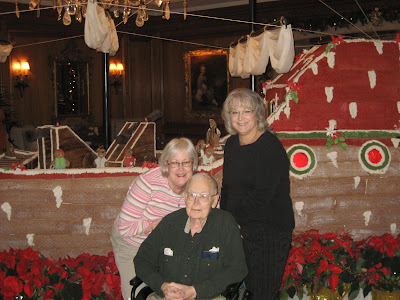 [In front of the Gingerbread Pirate Ship in the lobby of the Ritz Carlton]
"I don't see much sense in that," said Rabbit.
"No," said Pooh, humbly, " there isn't.
But there was going to be when I began it.
It's just that something happened to it along the way."
The train of my life is on the fast track and I have lost all control. There is a little bit of this done, and a little of that, but nothing feels very festive, let alone holy. In years past, I've been depressed at this time of year; one of many, I'm sure. This year I just feel discombobulated, unable to prioritize any of the many tasks. Well, that's not exactly true, of course my father is the #1 priority. He goes up and down physically, stays down emotionally.
Last night I was so mad at him for things he was saying that seemed just downright mean, that I was ready to throw in the proverbial towel. An hour or so later, he was shivering so badly he could barely stand with me on one side and my sister on the other. My anger melted away as I donned my FLorence Nightingale hat and did my best to comfort him. It was a long night but my sister took the first shift so I could sleep. We changed places at break of dawn. His fever seems to be gone, but he's still weak. My point is this, I KNOW there is only so much I can do. I KNOW my expectations for a Norman Rockwell Christmas are out of place and unattainable. I KNOW attitude is a state of mind. I'm just not doing a very good job of letting my knowledge rule me. I feel like one of those joy stealers Terri wrote about in her blog this week. Qn Dani would probably put me in "the naughty chair" before serving me a mocha latte if I don't begin to squelch my negative attitude. I haven't even stopped to think about the Christ Child we are celebrating in two days.
So right here and now, I'm going to try an experiment. I'm going to go back over the last few days and see if I can pick out the "pony" moments instead of the "poop".
With the exception of the new dryer which will make keeping up with the laundry easier, none of these little moments actually lightened my load, but they sure lightened my heart.
Wishing for you a magical moments,
Merry ME
Posted by Merry ME at 5:10 PM

Well...you're wrong about the naughty chair, but I would make you a minty mocha with whipped cream and peppermint sprinkles on top, sit you down beside me and remind you (using your own words to Reindeer girl) that you're strong even if you don't (always) feel like it, You're beautiful even if you don't (always) believe it, you are loved beyond measure, even when you make mistakes, feel unlovable, or feel sad. I would take your hands and (again using your own words) tell you that, like the Christmas baby, you were born for a reason - to shine light in a dark world.

Yep - that's what I'd do - and I'd hope (with all my heart) that you could take it into your own heart.

struggling with stuff isn't being a joy stealer, girl!!! it's being real. who wouldn't be struggling if they were in your shoes right now???
no need to feel joy when you just feel frustrated, exhausted and sad.
you don't steal joy....you only add to it. you're dealing with all of this and you still managed to spread joy to my holiday. know which word i picked this morning??? 'candle'....
know what phrase i keep passing around this season?? 'we are each others candles.'

we'll be your candles this season, mar. we're here for you.....and we're right beside you.

I so agree with the wonderful wise women who've already spoken here Mary...be kind and compassionate to yourself right now...it is okay to give yourself a hug. Just listen to that really big heart of yours that does so much for everyone else and hear, really hear, what it says to all of us, and then turn that inward Precious!
And Mary? Thank You for being a Beacon of Light for my family..and the path we walk along our journey...that light shines for both of us Sister Love!
Holding you in Sisterly Embrace and wishing you were here for just a little while so I could show you how much I mean that!
Blessings Dear Heart and Healing Too! A Very Merry Christmas to You and Yours from Me and Mine! :)
xoxoxoxo

You may feel discombobulated, but the important stuff, primarily Dad, is getting done so don't worry or 'sweat' as they say, the lesser stuff. It's really and truly not important.

Thinking of you all through these hard days.
Thank you and love you.
lg

MM, I'm new to the pages of your life...yet I know that you strive to see the good & positive of life just through your writing. Sounds like you've some great friends here that can hold you when you're needing to be held...what more can one ask for??