Boy Cat to the Rescue

"Blood is that fragile scarlet tree we carry within us."
Osbert Sitwell
I got a call yesterday from my vet, Dr. Barbara Kempf, with an unusual but not entirely unexpected request of my Boy kitty, known at the clinic as "Him." Him has a disease called polycythaemia which is a fancy way of saying his body makes too many red blood cells.
A year or more ago, Boy Cat woke me up by doing somersaults across the bed. Seriously, he appeared to have channeled Mary Lou Retton during her Olympic floor exercise routine. You know the one, where she starts at one end of the mat and flips herself forwards and backwards and all around until she gets to the opposite corner where she stops on a dime with no part of either foot off the mat. Well that was Boy Cat, except he didn't stop. I had to grab him and when I did he could hardly breathe.
We rushed him to the vet who took one look at him, hooked him up with an IV, put an oxygen mask over his face and pondered. First things first, she took a blood sample. Turns out his Packed Cell Volume (PCV) was about quadruple what it should be. In essence his blood was so thick it couldn't move very well through his veins, thus transporting too little oxygen to the brain, thus the seizure. The treatment for this disease is simple, old fashioned blood letting. With no leeches around Boy Cat was subjected to routine blood draws. This might sound like a biff bam boom job but when you are dealing with sharp needles and a feline with sharp claws and sharp teeth and the natural instinct not to be held down and treated like a pin cushion it can get a little tricky. 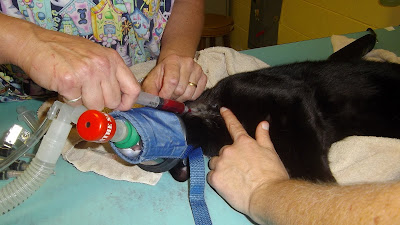 "Night, night Boy Cat."
Warning: If the sight of blood makes you feel a little queezy,
skip the next picture. 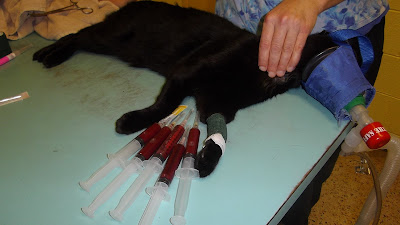 OMG.
This is why I did not stay to watch.
Basically what happens is two of Dr. Kempf's assistants come in and try to sweet talk the cat while unlatching the locks on his traveling cage. Boy Cat hisses his response. Can you say sabertooth tiger? With a move that took some practice to perfect, one lady removes the top of the cage while another throws a towel over the Him's head. It's better they say if he can't see what's about to happen. The towel also makes a slight barrier between Him's back claws and the assistant's arms. Once held in place, but producing a low spiteful growl that would indicate to most people that he is one unhappy cat and would like to be set free, in walks Julie, aka the Cat Whisperer, with a rather scary looking hyperdermic needle.
I can't really tell you what comes next because I close my eyes. I'm never sure which is worse the needle stick or the death scream that comes from the towel-covered cat. Good as she is, sometimes it takes Julie more than one stick. And sometimes the blood is so thick it clots and the whole thing has to be done again in another part of the body. The good news for Him is that after a few times the whole office learned the routine and while it didn't get less painful for the cat, it was less dangerous for Julie. It didn't take long before everyone knew not to attempt this blood letting unless Julie was on duty.
After several such "operations" Dr. Kempf prescribed some medicine that has worked quite well in bringing down Him's PCV count to a number that is not normal but tolerable. Every 3-4 months he has to have a quick stick and he's been good to go. Until today, when he was called in to donate blood to a very anemic kitty. This was a first for Super Cat and he was, by all accounts, a super cat. How could he not be after a shot of Valium? One dose of that stuff and he lay quietly on the table with his jugular exposed probably singing a feline version of 100 bottles of beer on the wall. He was still walking around like Jack Sparrow on the bounding main several hours later when I brought him home. I am happy to report that after a good nap he seems to be back to normal. Not exactly spunky but able to strut around the house letting all those in his presence know that he expects the royal treatment, i.e. a handful of kitty treats upon demand. 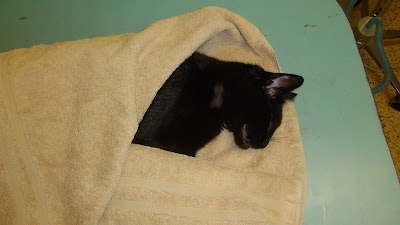 "Wake me up when it's time to go home."
I was a regular blood donor for a long time. I'm not sure how I got out of the habit. It's a relatively quick procedure, seriously (cross my heart) doesn't hurt much beyond the initial stick, and the nurses double as bearers of juice and cookies. The atmosphere is one of giving and always positive. After all the volunteer donors are literally sharing the gift of life. One pint of whole blood takes under an hour to donate and can save three lives. 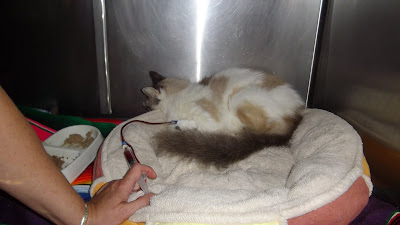 Kahlua being transfused.
Boy Cat no longer even pretends to believe the "it won't hurt a bit" pep talk I give him on the way to the vet's office. He turns his head away from me and glares at the plastic box holding him captive. When I hand him over to Julie he refuses to say goodbye. I feel like a bad cat mother for not staying with him to hold his paw. It was a little different this morning. The office was full of the same positive energy as the Blood Bank, because we all knew the same blood that makes Boy Cat sick is going to make a pretty little fur ball named Kahlua feel way better. I'm pretty proud of my Boy Cat. And even though he didn't really have a say in the matter he's proud too. I can tell by the way he walks through the room making sure everyone can see his shaved neck.
Today I'm grateful four-legged creatures who come into our lives and fill our hearts with their special magic. I'm grateful for Dr. Kempf, Julie and the whole crew at Parkway Animal Hospital who treat even wild beasts with gentleness and compassion. And I'm grateful to be a part of Kahlua's recovery.
Wishing for you a well stocked blood bank in your area.
Merry ME
Posted by Merry ME at 10:45 PM

Dear Merry ME,
Boy cat is a cat that deserves enormous appreciation, gratitude and undying thanks.

Some kitty just like him saved my Flopsy's life last aughust when she almost died and was diagnosed with IMHA.

She had to have three live blood transplants over the course of one week - and if it wasn't for incredibly kind owners and noble cats, she would have died without getting the live blood cells she needed to replace hers that were too low.

Awww....Him is a Hero in my eyes Mary for coming to the rescue of Kahlua even if it was precipitated by humans...

I have the same disease as Him only they call it erythrocytosis in us humans...they have not done blood-letting yet but my oncology doctor did mention it in passing as one way to take care of it.

I wanted to share this You Tube video with you on the off-chance you could show it to your Vet and it would be good for you to know it too for the next time you have to cage Boy Cat...anywho...go and check it out?
http://youtu.be/T9TmmF79Rw0
You'll have to copy and paste it in your browser but I assure you it is worth it! :) I stumbled upon it a few days ago and now I know why .... I've sent it to a few friends already who've needed to see it.

I hope you feel better Boy Cat!
And Mary...I couldn't have watched all that either...it'd give me nightmares!
Blessings Dear One!
xoxoxo