“When having a smackerel of something with a friend,
don't eat so much that you get stuck in the doorway trying to get out.”
Winnie the Pooh
Jack and I took a field trip today. We went to the Fresh Market. As if we were in Tiffany's we went to look (and drool) not actually shop. Unlike Publix or Walmart, the Fresh Market is more of a market than a large grocery emporium. I realize that the Fresh Market is, indeed, a chain store, but it's smaller and feels more small town "markety." Fresh produce in baskets, fresh cut meat wrapped in brown paper, fresh baked bread and cakes while you wait. Mmmmmm. It all makes grocery shopping more of an outing than a chore.

Today the market was decked out in its holiday finery. Two foot Christmas trees stood at the door, next to rows of poinsettias and blooming Christmas cacti. I have to tell you, those trees were so cute and simple that I almost bought one in my desire to downsize the holiday trappings. Since Jack wasn't as equally drawn to the midget firs as I, we chose, in the spirit of Christmas goodwill, to agree to disagree. We walked into the store, like kids going into FAO Schwartz. It was a veritable cornucopia of gourmet delights.
And that's another part of the holiday season, isn't it? The smells and tastes of so many special treats we don't allow ourselves at other times of the year. Poets of yore wrote of sugar plums, which according to what I can find out is "a small confection, often consisting of fruit such as a candied cherry or dried apricot surrounded by fondant."* The same source also said that because "prunes are dried plums, recipes calling for prunes are still keeping things plum-my." In my opinion, there is a rather large difference between a small sugary confection and something prunishly plum-my. Another internet source said sugarplums are "what the fairies eat when they want to sneak a sweet treat!"** I think fairies, like flying reindeer and a fat man who can get up and down a chimney without disturbing children who are sleeping with one eye open, are part of the magic of Christmas.

Upon entering the market Jack turned right and I turned left. He checked out softball sized fruits and mini eggplants. I headed straight for the candy aisle. Not so much because I had a sweet tooth, but the displays were so tantalizing, so perfectly stacked, so very Christmasy I couldn't resist. Out came my camera so I could share the sight. 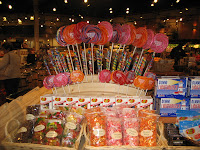 After one photo, a woman, obviously a member of the management, came up to me and asked if she could help me. I explained, as if a "real" journalist, that I wanted to write about Christmas sweets and thought the display would make a great addition to my article. Well, with that, the accommodating lady started straightening out all the giant lollipops so they would photograph to their best advantage. Check this out. I love that the lights in the background look a little like snowflakes! Surely a sucker that size would be enough to sweeten the disposition of even the grinchiest Grinch.

I close with this poem I found while researching sugar plums. I'd never read it before and I think it is kind of cute.
The Sugarplum Tree
(By Eugene Fields)
Have you ever heard of the Sugar-Plum Tree?
"Tis a marvel of great renown!
It blooms on the shore of the Lollipop sea
In the garden of Shut-Eye Town;
The fruit that it bears is so wondrously sweet
(As those who have tasted it say)
That good little children have only to eat
Of that fruit to be happy next day.
When you've got to the tree,
you would have a hard time
To capture the fruit which I sing;
The tree is so tall that no person could climb
To the boughs where the sugar-plums swing!
But up in that tree sits a chocolate cat,
And a gingerbread dog prowls below-
And this is the way you contrive to get at
Those sugar-plums tempting you so:

You say but the word to that gingerbread dog
And he barks with such terrible zest
That the chocolate cat is at once all agog,
As her swelling proportions attest.
And the chocolate cat goes cavorting around
From this leafy limb unto that,
And the sugar-plums tumble, of course, to the ground-
Hurrah for that chocolate cat!
There are marshmallows, gumdrops, and peppermint canes,
With stripings of scarlet or gold,
And you carry away of the treasure that rains
As much as your apron can hold!
So come, little child, cuddle closer to me
In your dainty white nightcap and gown,
And I'll rock you away to that Sugar-Plum Tree
In the garden of Shut-Eye Town. 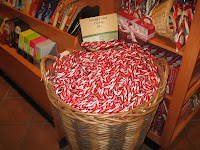 In the days ahead, in the Christmas rush, I hope you'll have at least a few fairy, gingerbread dog or chocolate cat sightings. If not that, then at the very least, I wish for you a candy cane or two.

* The New Food Lover's Companion as quoted on the Food Network site.
**dedewilson.com/recipies/sugarplums.html
Posted by Merry ME at 10:35 PM

I've been researching sugar plums too. "Sugar-plums" was a catch all term that referred to any small round hard candy of various color and flavor, often sold in a brightly colored paper cone closed with a ribbon. Don't believe the modern confectioners who fantasize that they were sugared prunes or a chocolate coated mash of nuts and dates.