From the donkey who carried Mary into Bethlehem to Rudolph and his flying reindeer friends animals are featured prominently in most holiday stories. Soft, furry, friendly animals you can't help but love. Or mean, grouchy animals that are transformed by the magic of the season. You name the animal and it undoubtedly has a holiday story to tell. Magic, you see, is the language of Christmas.


I discovered a few years ago that I am the kind of girl who needs a theme to work with when making things merry. From brown birthdays, to monkey baby showers, to blog posts, I've found if you have a theme to work with, you don't have to work so hard. As for this time of year, I realize that Christmas is, in and of itself, the more prominent theme; still I like to put my own twist on the familiar. I learned this from a couple of gay guys who lived next door to me in San Diego. One look at their over-the-top, neon bright tropical fish tree, with hand painted ornments that looked like they just swam out of the Caribbean Sea, and I knew I had to try the theme approach.

In years past I've had a purple theme, a cow theme, a shell theme, and a travel theme. The Christmas after I went to Cursillo, I was amazed to find a plethora of rooster ornaments for my de Colores theme. I am pretty sure, if you can think it up, somebody somewhere has already thought it up and turned the idea into ornaments for your tree. And I have to tell you, once you've picked a theme it's very likely that you will become obsessed with hunting down every last theme-based decoration. 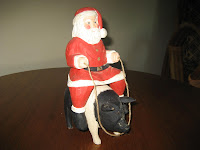 Take for instance this delightful Santa pig. I've had it for a few years, but never really considered having a whole Christmas planned around it. Let's face it, except for baby pigs, swine are not necessarily the most loveable of animals. They are rather large, and my guess is they are kind of stinky from rolling around in the mud. However, I've recently read two books about pigs (The Pig of Happiness by Edward Monkton, and The Good Good Pig: The Extraordinary Life of Christopher Hogwood by Sy Montgomery) and I believe if we open our hearts to the good things about pigs, we won't have time to think about the ugly stuff this world can dish out. A pig seems pretty content just being a pig and that can be a good lesson for us humans.


Which brings me to this announcement that for Jack and I, 2007 will be the year of the Christmas pig. Go ahead, scoff if you must. But not before you read this article that was in today's newspaper. All heavenly signs are not necessarily bright stars or singing angels. Perhaps, rather than strains of glorious halleluias, all one has to do to know she's on to something is read a simple column hidden in the middle of the Metro section. There's more to this Christmas pig idea than first meets the eye. So stay tuned.


"A Modern Christmas includes Pigs"
By TERRY DICKSON, The Times-Union


ST. SIMONS ISLAND - It's beginning to look a lot like Christmas. People are festooning their yards and houses with lights, inflatable Frosty the Snowpersons, Santa Claus and other stuff.


And it's so easy. You go to your local store, buy lights and string them up, plug them in and - this is the amazing part - they work.

It wasn't always that way.

Back in the '50s and '60s, my mother and I would repeat the same ritual about every year. A few weeks before Christmas, she would tell me to put on my coat and my cap with the ear flaps. We'd bundle up and ride the country roads looking for a red cedar with a pleasing shape. She'd whack it down with an ax, load it in the trunk of the car and stick it in a bucket at home.

My mother would untangle the strings of lights, plug them in and, usually, they would remain cold and dark. In those days, one bad bulb kept the rest from working. She would painstakingly remove each bulb in the string and replace it with a good bulb until she found the rascal that didn't work. Once they lit up, she would string them on the tree and they would go out again and she would start replacing bulbs again, then and for three or four more times until the tree came down.

But at least it was a real tree with a real cedar smell. Now you can buy herds of electric reindeer and trees that are already decorated and have them staked out in the yard in minutes.

We always buy real trees for the living room, and this year Vonette, my wife of 30 Christmases, added a couple of easy to assemble, stand-'em-up and plug-'em-in trees, one for the den, one for the yard.

This trend started humbly a few years ago when Vonette saw a small electrified deer in a box. Thinking it was cute, she bought it. It turns out, Christmas decorations can be like the people you meet on the Internet. The pictures aren't always representative. The guy who looked like Richard Gere on the computer screen tends to look like Richard Nixon in the flesh. Nonetheless, Vonette set the little deer among the already decorated shrubbery and plugged it in. As we were going out for dinner, our daughter, Jessica, glanced at the cheerfully lit animal and said, "That's supposed to be a deer? It looks like a pig.''

Thinking her remark was insensitive and hurtful, I immediately came to Vonette's defense.

It did look a little overfed and short-legged. And unfortunately, as Christmas animals go, pigs don't make it.

There were no hogs snorting around the manger on the first Christmas, and swineherds weren't watching their flocks by night. And how about Christmas songs? Rudolph the Red-Snouted Poland China hog? Amal and the Night Swine?

Guess I'll have to do it myself. So here we go, an out-of-meter ditty sung to the tune of the Beverly Hillbillies theme:
Come listen to my story,
'Bout the Christmas pig,
The runt of the litter,
He wasn't very big.
While carolers sing
About old Rudolph,
The little Christmas pig's
Got his nose in the trough.
Tater peels, stale bread,
Eggplant casserole.
The problem with a hog,
Is he won't pull a sleigh.
Call him for work,
He'll run the other way,
But for Christmas leavings,
He can't be beat.
There ain't very much
A hog won't eat.
Fruit cake, soy-based egg nog,
Men's cologne...
A new Christmas tradition is born. The yule hog is lit.
Enjoy the season.

Perfect theme for the year of the Golden Pig!!

I forgot you had a Santa-Riding-His-Pig too! Mine is prominently out as well.

Merry Pig Christmas to you!

We did the fifty states on christmas trees this year. I must say a gay guy was in charge! Were getting a lot of comments and people seem to like the theme thing! hey that almost rhymed. Love ya mom, does this mean you need pig stuff? cuz we can do that!
John