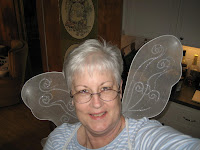 " Spread your wings and let the fairy in you fly! "
Author Unknown
When I was a little kid we lived in Philadelphia. Just learning to talk I am told I had my own way of saying things - chish (fish), chork (fork) and chank (Frank) - sort of a combo of toddler and south Philly. Also, for some reason that has never been thoroughly explained to me, I dubbed myself "Mary the fairy Hartmeyer." I must have had a thing a young man named Hartmeyer who worked for my father. Go figure! Mary the Fairy was a name that stuck over the years. Not stuck as in "Swaying Sapling" but it had enough staying power that one of my personas is easily influenced by fairy paraphernalia.

I went to my writer's group this morning. It felt good. I felt free; or at least on a longer leash. My sister was making breakfast for Dad. I left his "where are you going?" comment at the door. [Note to self: Maybe the gruffness of his voice has nothing to do with what he's saying. Maybe he's not growling at me, a growl is just his normal tenor. Could it be that where are you going is just a question so he'll know where I'm going? It doesn't have to be a snarl - WHERE ARE YOU GOING NOW MISSY?"]

The group's discussion was compassionate and gentle. There was a thread of wanting to control how other's live their lives running through the conversation. We all seemed to be saying we care for people in our lives and only want things to be better for them. When our intentions are good, why don't those people act on the wisdom we so generously confer on them? It's a question I live with daily so I could definitely relate. Two hours and two giant glasses of iced tea passed by all too quickly.

As I drove home something white and glittery and shimmery caught my eye - not an easy thing to do at 60 mph. But I knew immediately what it was. Fairy wings!

Fairy wings on the side of the road. Was that an ominous sign - some poor fairy had lost her wings? Or was it an omen - I needed to dig deep and bring my fairy self back to life? I would have whipped a James Bond (or James Ellington) u-turn, but there was a big fence in the middle of the highway. So I drove west, turned south, crossed back over the freeway, drove past the wings twice, turned around on a side road then parked in a deserted parking lot to get to within a block of the wings lying forlornly in the gutter.

As if I were rescuing the whole fairy not just her wings, I picked them up tenderly and checked for any breaks. Except for a slight tear in one corner, these gossamer glories were in perfect condition. I knew I had discovered fairy paydirt. I knew these wings were meant for me. White with silver glitter.They even match my hair!

When I got home, I tried them on. Like Cinderella's glass slipper, the elastic bands that hold the wings on, slipped right into place. The wings sit just over my shoulder blades resting comfortably on the spot that I believe was made for such glamorous accoutrements. I am pretty sure I can fly if I close my eyes and stand on my tippy toes, but for now, just wearing the wings is enough.

I don't know why things happen the way they do. I don't know how the wings got to where they were or why I was the only person cruising down the highway who decided to stop and pick them up. But I do know that something as simple as fairy wings, can make a person feel lighter, happier.

Clapping my hands because I believe, I am,
Merry ME
Posted by Merry ME at 8:25 PM

Stopping the car to rescue a misplaced dog is one thing, but going around the block three times for a pair of fairy wings - priceless. I'd like to think that a fairy didn't lose her wings for you to find them but rather that she grew out of them and got shiny new ones. You know, like a hermit crab.

Thanks for the smile.

I am still smiling at the thought of you whizzing along and actually "SEEING" those wings on the side of the road!
YEP meant for You!
I do
I do believe in Mary's!!