"Feeling gratitude and not expressing it
is like wrapping a present and not giving it."
William Arthur Ward
Here we are, the day after Thanksgiving. As if the days of the year aren't already moving fast enough, the time from now to Dec. 31st is going to pass by like a snowball rolling downhill, picking up speed and extra snow as it goes. The time of the year that should be the most sacred, the most meditative goes by in a big blur of decorations, Christmas carols, too much food and too much stress.

See, I've already moved beyond this post-thanksgiving day. I think yesterday may have been one of my most organized, best choreographed food fests. Okay, so the turkey was just a teeny tiny tad undercooked (I know - gag!) and the brownies were just that much overcooked. I think it all evened out in the end. 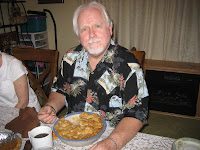 Mostly the the family dysfunction that usually shows itself in all its glory at holidays was missing. I remember laughing not bitching. I remember lively conversation, not stoney silence. I remember blessings, not hurt feelings. And that, my friends, is what the holiday season is all about isn't it? [Photo L: A man and his pie - it'a a beautiful thing!]

There was another family gathering taking place 2000 miles away. Most of my favorite people were together for the first time in 15 years. Cousins were reunited and grand cousins got to meet the people they'd been hearing about for most of their lives. Young and old together the way a family is supposed to be. In my mind's eye I picture it rather Rockwellian. I can't wait to see the actual photos, because I bet someone has red eyes from crying, sleepy eyes from lack of rest, and a plunger in hand because they forgot the "don't put the potato peel in the disposal" rule. Ahhh, now that's going to be a holiday to remember.

When I dragged my lazy ass out of bed this morning at a near record late hour ( it was still am, though not for long) my Sweetie had already unloaded the dishwasher and put the living/dining room back in order (you gotta love a man like that!). Now I've got to figure out how to put the good china back in the cupboard and find the turkey in the mass of refrigerated leftovers because the second course of Thanksgiving dinner is about to begin.

Today I have a grateful heart. While early money-saving shoppers are out there doing their best to help the economy, I think I'll put on a gentle Christmas CD, eat a turkey sandwich and burrow down into the gratitude.

I hope you can find the time in the coming weeks to do the same,
Merry ME
Posted by Merry ME at 12:22 PM