“Good bread is the most fundamentally satisfying of all foods;
and good bread with fresh butter, the greatest of feasts.”
James Beard (1903-1985)

My Sweetie has never met a loaf of bread that he didn't like. He'll eat it slathered in butter, smothered in jelly or wrapped around a mustard covered hot dog. So when he picked up an old copy of Mother Earth News and read the article "5 Minutes A Day for Fresh-Baked Bread"* he nearly started salivating. The article's first paragraph said things like, "easy," "no kneading," and "your house will smell like a bakery." It also said "Baking bread at home saves hundreds every year. With this easy method, each loaf will only cost you about 50 cents and 5 minutes a day." Sweetie was sold. We were about to embark on a bread making adventure.

First thing we had to do was buy a baking stone. Then some flour for the dough and cornmeal for the stone. Then some yeast. Our first loaf of bread was going to cost way more than 50 cents. But we weren't just making bread. We were adding a whole new dimension to our relationship. 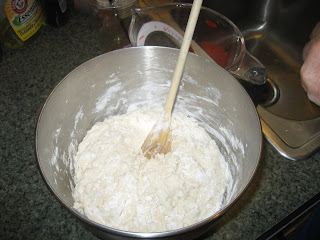 "Great breads really only require four basic ingredients: flour, water, yeast and salt." Working in tandem Sweetie and I divvied up the recipe - he was in charge of the water and salt. I measured out the yeast and flour. Sweetie stirred the ingredients while I attached the dough hook to my Kitchen Aid mixer for the first time. "This step is done in a matter of minutes and yields a wet dough ..." So far, so good.

Next the dough had to rise for two hours. I love watching dough rise. It's like magic. One minute you have this little ball of goo in the bottom of a bowl. A little while later you go back and find that a living, breathing blob has just about outgrown the biggest bowl in your kitchen inventory.

This recipe does not have the punch down stage - one of my favorite parts of bread making. Punching bread dough seems so much more civilized than smacking somebody in the nose. All you have to do is put the covered bowl in the fridge and let it sit for a few hours or a few days. "Relax," the instructions say, so Sweetie went outside by the pool to read and I did some sewing while the dough continued to do its thing.

With very few exceptions our dinner hour is 7 pm. Because I was going out and the soup was almost done, we decided we couldn't wait. We moved right onto the next step. The part where you make a neat little boule or "artisan free-form loaf." 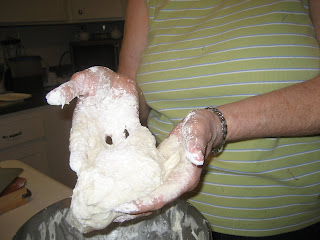 "Hold the mass of dough in your hands and add a little more flour as needed so it won't stick to your hands." Uh, excuse me, how exactly do you get more flour on your hands when they are glued together by the dough ball from hell? While Sweetie sprinkled enough corn meal to feed an army of Purdue chickens on the cookie sheet we were using as a pizza peel, my sister dusted me with flour. Still the dough didn't really want to stretch as prettily as the picture in the magazine. After all the flouring and stretching the dough needed a rest - so did I!

It takes a "forward jerking motion of the wrist" to slide the dough ball from the pizza peel to the baking stone. As I jerked my wrist the corn meal flew all over the oven but the bread didn't slide. I jerked a few more times and it finally came loose. One more JERK and it ended up on the stone as directed. One down, one to go. The second loaf needed more of a push than a jerk but it made it to the stone not the bottom of the oven. Sweetie set the timer for 30 minutes and I left for church. "When you remove the loaf from the oven, it will audibly crack, or "sing" when exposed to room temperature air." 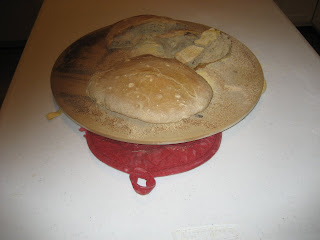 Sweetie read this morning about a New Jersey woman who sold home baked apple cakes to raise money to pay her mortgage. I think we're going to have to practice a bit before we can hope to sell our yeasty hockey pucks. This won't be a problem because we've got lots of dough resting and waiting in the refrigerator. Since Sweetie gets up with the sun and way before me, I expect to wake up in the morning to the smell of fresh bread toasted and slathered in butter.

I just read your bread blog and remembered a recipe in the NYTimes a couple of years ago...found it and sent it to you. I never made it but a friend used to make it all the time and it was delicious. Cooks Illustrated picked it up and I believe tried to improve on it. It was a rage for awhile. No Knead Bread. I'm not sure how different it is from your recipe but compare it and try it. No kneading and sticking!

The end product was everything a boule should be - only more so. Chewy - YUP! Good crust - YUP! a posiboe destructive force for dentures - YUP! With 3/4's of one boule gone, we (maybe just I) have more chewing to look forward to. But, joy of joys - there is still the glob in ghe fridge.

I love making bread, and since i am a food fanatic, ( according to the teen) and will not buy anything with ingredients i can not pronounce, I make bread 3x a week.
no
seriously I do.
If you ever want a recipe for something tasty that requires a bit more work ( and ingredients) give a shout! i make a simple sandwich bread thats a snap! and my Challah is my grandmothers recipe, YUM!!!!