What I don't know won't hurt me 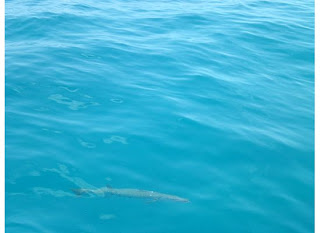 "Your children tell you casually years later
what it would have killed you with worry to know at the time."
Mignon McLaughlin
[Photo by KW Johnny: Barracuda waiting for Ashley to come and play.]
Most of being a parent is on the job training - you learn as you go. Some things you learn quickly and others it takes awhile. For instance it only took being hit in the face with a stream of pee one time before I learned to keep my infant son's dead aim pee-er covered up when I changed his diaper. However, it took me a few frantic searches near the lake a block away from our house before I learned to keep the front door locked in an effort to trap in a toddler who liked to wander. This practice proved helpful years later when the same child called through the screen door, "I think there's a rattle snake on the porch."

Even with all the books written on the subject of parenting there are some things that you never get used to. My son, Key West Johnny, is now a grown man but delights in telling me tales he either innocently (yeh, right) neglected to share with me or chose to keep from me so he could continue his wild ways. Even now, years later, I believe some things are better left unsaid.
Recently he told me that he thought I'd put a contract out on him because I'd sent him to a high school known apparently to everyone but me as being a gang school. Let me say that even if the kid had issues with authority figures, and this was the third school he was enrolled in, I never knew he was in any kind of danger except from his father. At this particular school his flight or fight instinct kicked in and he spent many days somewhere other than in class. In my defense, this was the same school Mario Lopez attended and he doesn't look any worse for wear. Call me naive, but I didn't have any inkling that kids were toting guns into classrooms for protection or other deviant behavior. In my not so distant memory school was a place that had rules and regulations. Students were supposed to attend classes on a regular basis, do their homework, not talk back to the teachers (or call them names that start with "B"), keep their hands to themselves and save the singing of the school fight song and wearing of colors for Friday night football games. What did I know about gangs?
Trust me, I was shocked when I heard fearing for his life was the reason Johnny refused to attend that school and chose instead to go to the school for "troubled" kids. But not as shocked as when he told me he'd also spent some time in a Mexican jail just south of the California border. Over the years I'd heard rumors that Johnny and his sister crossed into Mexico on occasion to party where the drinking age was not strictly enforced. Shivers run down my spine now as I think about my gringo children endangering themselves as they frolicked from bar to bar to the tune of a Mariachi band or street urchins selling "Chick-lays! Chick-lays!"
Where was I you might ask. And rightfully so. I was home, perhaps in bed with the covers over my head warding off depression, believing my two little darlings were with friends studying, or bowling, or serving mankind in some way. That might be an exaggeration, but let me tell you this - a urine stained cement cell in Tijuana never, ever entered my mind. As it turns out this was a pretty good learning experience for KW Johnny. It only took him a few hours to learn his lesson, sober up and high tail it back to the good ole USA.
It is perfectly clear that my children got their love of adventure from their father. The man who referred to himself as James Bond. The man who told a passel of 7-year olds to stand back while he took aim at the previously mentioned rattlesnake with a 22 pistol. It was the talk of the neighborhood for days. John has been known to continue a roofing job in a lightening storm when all other workers had run for cover. Last year when KW was being evacuated due to a hurricane, I learned that my son, the carpenter, was considered part of an emergency crew that couldn't leave the one mile island. Huh?
Perhaps a little less daring, but still out of her mother's comfort zone, my daughter, Weneki, took a one-woman trip to Europe a few years ago. She met people all along the way doing the very thing I warned her not to do ... talk to strangers! Maybe when you get to be 35 you are a bit more discerning when it comes to stranger danger.
I've got to guess it isn't easy being a kid these days. It is also pretty scary being a parent. In a perfect world you learn as you go. Parents learn to check out Internet networking sites and underage drinkers learn who they can call to bail them out of jail. But what about the Grammy who is a generation removed from the things her teenage granddaughter is exposed to at school, on TV and on her state-of-the-arts computer? And what about the daughter who is devoting her days to caring for her 92-year old father who likes to play with guns?
What, pray tell, does one do when she gets an email from her son that reads: Went snorkeling today. Ash was the first to spot the sharks ... SHARKS??????
Yesterday my brother-in-law and father had a date. I didn't just fall off the turnip truck. I knew something was up. I just didn't know what. But one look at the Cheshire cat grins on their faces when they walked in the door and I knew. My father, a life-long defender of the second amendment, who can't see well, can only hear out of one ear, uses a walker to get around and has hands that shake like teacups in a earthquake is the proud owner of a a shiny new handgun. When asked why, he told me he always wanted one as if that is explanation enough.
I can understand that. There are things I've wanted in my life, too. Like a son who does not live to make my heart beat in an erratic rhythm, and a father who is content read NRA magazines and dream about what might have been.
Shaking my head and wondering where I went wrong,
Merry ME
*The Second Neurotic's Notebook, 1966
Posted by Merry ME at 10:41 PM

~snort~
Blame it on your genes, you just didn't get the same one Pop got or KW Johnny got...
perhaps they skipped a generation?
~laughing~

Yep I understand... ok we don't have guns over here or Mexico to pop into. And drinking and other awful deeds start early. But bringing up children I know now is an all time nightmare, well at least one of them!
xx