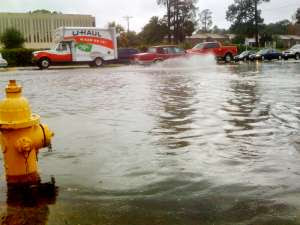 You might be a blogger if:
"when your kitchen is filled with black smoke, flames are shooting out of your oven and first thing you do is grab your camera." *

My writer's group re-grouped this morning. In an effort to lessen the impact of my being gone during his mealtime, I tried to time my time away so that I'd get home before he wanted lunch. I even brought him oatmeal raisin cookies for dessert. We both knew it was a bribe.

I was paying more attention to the hands of my watch nearing high noon than I was the ran pouring outside the restaurant. As soon as I stepped outside I was drenched. I ran to my car grateful for the first time for the little button I can push on the new key chain that unlocks the car doors without me having to fumble with trying to insert a key into a lock when lighting is crackling overhead and buckets of water are running down your back. One push of the button and I was able to swing open the door and throw my dripping body onto the seat.

I've driven in rain before but I soon realized this was more like driving through a deluge than the typical Florida afternoon shower. I drove 30 miles per hour down the freeway because a) I could barely see in front of me and b)the roads were flooded. All those news warnings of "DO NOT DRIVE IN STANDING WATER" flashed through my brain's emergency handbook. What's a girl to do, however, when there is water everywhere around her - stop in the middle of the road? Again, I had a feeling of immense gratitude to the new car god who in his infinite wisdom convinced me to rid myself of the old van that released its serpentine belt (i.e. the thing that gives the word "power" as in power steering, meaning) at the slightest hint of water anywhere nearby. Warnings and rising water be damned - I drove right through some of the biggest puddles I've ever seen, if I could have seen them between swipes of the windshield wipers.

At one point I noticed the wake on either side of the car as I drove down the road was like something I'd seen recently on Deadliest Catch. My car was not riding the waves like crab boats in the Bering Sea, but there was quite a bit of water splashing all around me. This is when I realized I might have become a bit of a crazed blogger. For one instant, I seriously considered reaching into my purse, finding my camera by the Braille method, unzipping its case, turning it on and taking a picture of what I was driving through WITH ONE HAND. It wasn't something I thought about for long but I confess I the thought was there.

What is it about this on-line diary that make me think anything is worth the possible consequences if I can not only live through the experience but also document it in words and photos. I'd be the first one to say to the news reporter (and his cameraman - or my son for that matter) standing on the last spit of the U.S. mainland being blown away by hurricane winds that telling this story is not worth risking his life.

I have to say, though, I can kind of relate to the creative thrill of the moment.