Great Idea? You Tell ME

"By and large, mothers and housewives
are the only workers who do not have regular time off.
They are the great vacationless class."
Anne Morrow Lindbergh
My son, formerly known as KeyWest Johnny, has been staying with me for about a month. He's in transition, trying to get out of one line of work and into another. It's been a long time since we've lived under the same roof. I'm liking having him around. Trouble is he is a bit of a mole. He sleeps during the day and stays up at night. His daughter arrived on Saturday to show him what mole-living is all about. My idea of hanging out with them and getting to know my granddaughter has not materialized because we are on totally different time clocks.
This morning, however, father and daughter were up, dressed in beach attire and ready to boogy by 10am. I waved goodbye as they headed for playgrounds and beaches in the southern half of the state. So far today they've driven for 5 hours, shopped at Ron Jon's Surf Shop in Cocoa Beach, and found a cool Art Deco (?) hotel in Miami. Not to mention lots of wind and rain. Can anyone say Tropical Storm? It wouldn't be any fun for Johnson without an element of danger involved. His daughter, my sweet grand baby, is just like him. Every time they tell tales of past adventures like swimming with sharks, or rays or barracudas in Key West and I'd get a scaredy cat look on my face, I got a look. The kind of look only a sixteen year old can give when the person she is looking at is totally not cool, or nerdy, or just plain too old for words.
After they drove away with adventure written all over their faces I realized that it's been a long time since I've had what I could call a vacation. Two hours in Barnes & Noble is a nice break, but it doesn't quite qualify as a holiday. Now B&N in Seattle - that would be a nice! I don't say that with a whiny voice. I'm just stating a fact. There are places I'd like to go and people I'd like to visit, beaches I'd like to swim in and tours I'd like to take. I know my time will come. I can wait.
But here's what I'm missing. Postcards.
Back when I was married my it's-a-Navy-day-let's-get-under-way-helicopter-pilot-husband spent a lot of time at sea. He also spent a lot of time in foreign ports, drinking foreign beers and eating foreign foods. In the days before the Internet and email and cell phones, I was not always the happiest of stay at home wives when he'd call and want to tell me all about the things he'd seen and how much fun he was having. Fun, I guess, is a relative thing. I know after several weeks at sea he needed to get off the ship and spend time on dry land. What he needed and what I wanted were often different things. I wanted him home ... waa, waa, waa ... 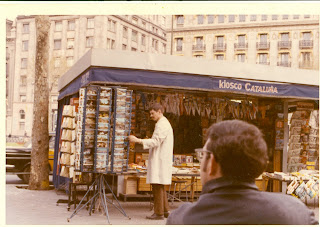 On the good side, the thing this world traveler always did that made the kids and me look forward to the daily mail run was send postcards. I still have a box full of cards from all the places he visited. Though I haven't done it in awhile, it's fun to look through them, enjoy the pictures, read a few short lines, and remember. What couldn't make me smile back then, is the stuff memories are made of today.
Postcards are like little hugs that reach out across vast spaces. They say things like, "wish you were here" or, "you should see this place" or "this place reminds me of the fish hatchery* back home," or, "the weather is beautiful" or, "I miss you," or, "could you send more money?" or ....
Before digital cameras that can transport a picture around the world in a matter of seconds, postcards provided small glimpses of distant lands, history, and people. And like multi-colored sprinkles on top of a cupcake, postcards also carry with them stamps from foreign places. How cool is that?
So, as I sit here in my home sweet home with no vacation on my horizon, I'm wondering if there is a way to exchange postcards with those of you who may (or may not) be traveling. Here's what I've come up with. If you send me a postcard from wherever you are (or go) then I'll have a mailbox full of cards that in their own small way will be like I'm on vacation. Since turn about is fair play, I'll send you a postcard from sunny Florida. I'll also scan the cards I get into my blog. I realize this is a totally self-serving idea. I've tried to think of a way to make it like a chain letter where everyone can get something in the mail, but my mind isn't working in that kind of detail these days. Besides nobody likes chain letters - or postcards - anyway.
So what do you think? Are you in? If you want to play and don't have my snail mail address email me and I'll send it to you. If you don't want to play, well I know how that feels too. No pressure.
Wishing for you time spent in your favorite place,
Merry ME
P.S. Photo: Texas Jimmy at a postcard stand in Barcelona.
P.S.S. * This is an actual statement made about some famous Mediterranean relics by someone who was more interested in the next beer stop than the broken statues.
Posted by Merry ME at 9:24 PM

We are so totally on the same page. I was thinking along these lines, but hadn't followed through. Way to go! I'll have a post card hitting the road to Florida soon.

Oh Mary -- if only you had thought of this in spring when we visited the Mustard Museum in Middleton, Wisconsin and the Trolls in Mount Horeb. THOSE would have been some good postcards!! :o) But alas...now all I will be able to send you is photos from the bakery cuz I don't think I will be traveling again for a while. But if I do, you'll be the first to READ all about it!! :o)