On The Road Again, Part 2

"Make you the world a bit better or more beautiful
because you have lived in it."
Edward W. Bok
Sweetie and I made it home safely, but not without some excitement. The funeral was held in an historic Episcopalian church, red door and all, with only about 7 rows of pews on either side of a main aisle. The church was overflowing which was a great tribute to the woman who was being remembered. Over 170 people whose mean age was probably around 75 and girth, well let's just say large, were packed in like sardines. Walkers and wheelchairs and canes were left in the back of the church. It's never a good sign when an ambulance is called and one of the attendees is taken away on a stretcher before the service even starts.
[As an aside, it's clear that central Florida, is a haven for people of retirement age. The mobile home parks were only outnumbered by the number of cardiologists advertising on big billboards along the highway.]
I was uncertain as to how I might react at the funeral. Not because of the suspected fireworks, but because southern funeral songs tend to be the ones my dad loved to sing. Sure enough when Tennessee Ernie Ford began singing "Whispering Hope" via a cd player, my eyes began to leak. I did pretty good til they got to In the Garden. It'll probably be a tear jerker for years to come.
Before the final prayer was said, my Sweetie, asked to speak. As the brother of the deceased's first husband (who was father to 4 of her children) he spoke of how proud his brother would have been to see how well Peg raised her children. His words were short and sweet and appreciated by the family. Well, most of the family. As we were leaving the oldest daughter, who everyone agree has issues, decided Uncle Jack would be a good target for some of her anger. I didn't hear what was said, but I saw the steam coming out of Sweetie's ears as he casually walked away. And that is the whole point of my even telling this story.
I watched with pride as my husband diffused what could have been a ticking bomb by simply not engaging. He's a man who knows when to speak and when to walk away. It was really kind of alarming to see so much anger in a person. I suspect underneath the it all there is a great deal of sadness. Now that both her parents are gone, I wonder will she ever be able to let go of the hurt. Or will she go through the rest of her life like a fire-breathing dragon? And I couldn't help but think, as I often do, the same about me. I'm seeing more and more clearly how with my parents gone, it's time for me to let go of childhood hurts and come to a place of peace. It's probably something I should have done a long time ago. Not sure how hard that's going to be, but I'm going to try.
Even with the outside temperatures hot and humid, and the emotional temperature inside the car also pretty high, Sweetie agreed to take me to a place I've wanted to go which just happened to be just down the road and through the orange groves from where we were. It's called Bok Tower. All I knew of it was it had this gigantic carillon and you could sit on the grass and hear the music from anywhere on the grounds. What we discovered was another historic landmark, some beautiful gardens, delightful music and great photo ops. Sweetie got to try out his new camera and I got to channel my inner Molly (a photo taking blogging friend who is a kazillion times better than me). Here are just a few: 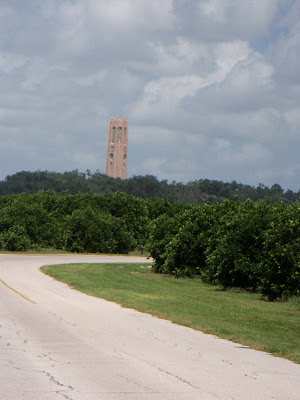 Coming around the bend. The Bok Tower towering over the landscape. 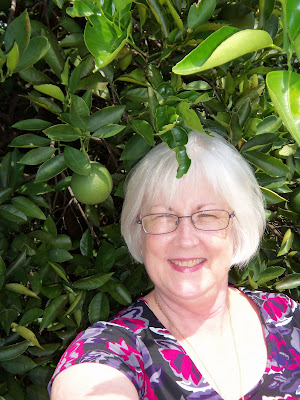 Self portrait: Merry Me in the orange groves 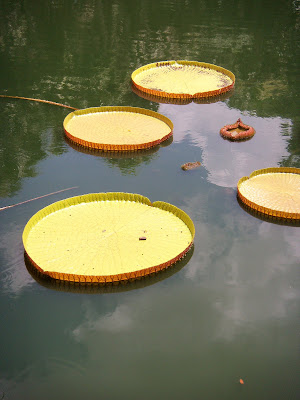 The strangest lily pads I've ever seen.
Sweetie thought they may be man-made,
but if you look real close you can see they are au naturale. 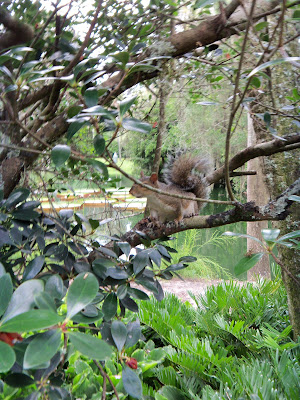 A feisty little squirrel sitting on a branch saying cheese. 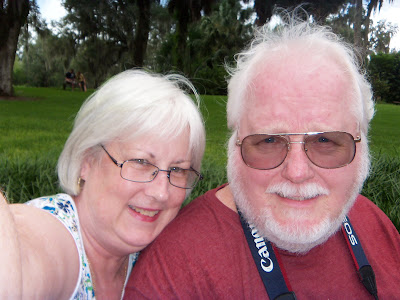 Two big cuties enjoying a park bench and music.
Unfortunately, we weren't prepared for the amount of walking or the heat. Plus there were some big black clouds on the horizon that reminded me of the Wizard of Oz, so we didn't stay as long as we would have liked. We've put it on our list of places to see again when the weather has cooled off some. It's quite beautiful if you ever need a destination in central Florida that does not include amusement parks. 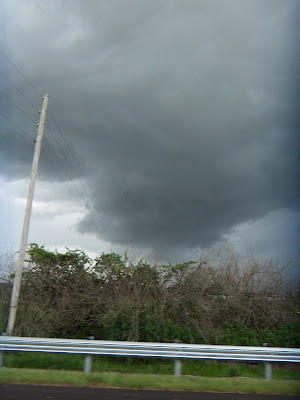 Storm brewing.
Today I'm grateful for prayers and hymns and memories. I'm grateful for the man I call Sweetie. I'm thankful for time away and I'm grateful for a home to return to.
May your own special touch make the world where you are a better place.
Merry ME
Posted by Merry ME at 11:00 PM

I LOVE the photos! and I love discovering things. My dream is a road trip to celebrate my 50th birthday which is inexorably closing in :)

I'm traveling next week, and hope to see some things I've not seen before.

Sorry for the reason for the road trip Mary, but I loved the photo's you posted. :) Especially the one of the Tower!

Jack sounds like one outstanding Man to have done what he did by walking away from the young woman who was so enraged...my hat is off to him!

I'm with you on those hymns...they were my Mom's favorites. Whispering Hope being the first one and we played it at her funeral too.