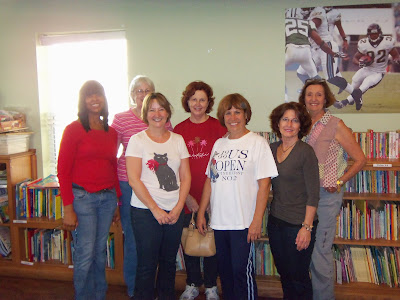 Le Chat Noir Writers Circle
You know how I said in a previous post how wonderful it feels to do good deeds for others.
Today my writing group tackled the children's library and art room at city's Homeless Shelter. The job turned out to be more cleaning, sorting, arranging and organizing the room than alphabetizing books. My goodness it's amazing what can happen when you get 7 determined women together with cleaning on their minds. When it was all over we were hot, sweaty and hungry, but felt stupendous inside.
There are many things about the Sulzbacher Center that make it an asset for our city. It is a good size, has medical and dental care on site, has libraries, TV's, a few computers, social/living areas and a devoted staff. But, it's still a place where people go when they have lost their home and everything that goes along with that loss. It hurts my heart to think that the number of families in shelters like this is growing. Politicians can make all kinds of promises, economists can make all kinds of predictions, but it doesn't change the fact that whole families are living in cars or cramming themselves into a room the size of a college dorm.
As we were putting some games and books in one of the living areas, a mom, dad and their little girl (around 3) came out to look through the games. Mom who loves word games was excited to see a battered box of Scrabble. My heart leaped for joy when they asked about a "memory" game. My kids and I used to play memory all the time so I purposely bought a couple packs of Sesame Street cards just for that purpose. Something as simple as a card game from the dollar store put a smile on a little girl's face. And you know that made mom and dad smile.
Hope I think is when someone has an idea to make the world a little brighter, no matter what the circumstances. Besides the commraderie and a job well done satisfaction, I carried home with me two reminders of the morning. There in the middle of a dusty spot of ground, with little grass to speak of I saw an older man raking the grass. To be honest there wasn't much to rake. It looked to me like the man just wanted his small piece of land to good, like taking the time to dust the top shelf of your bookcase, or sweep your driveway. Nobody else is ever going to see it, but you know it's clean. And, while it might be a grand assumption on my part, I got the sense that he was saying a prayer of gratitude as he raked. I was especially surprised to see three ice chests, filled with dirt and herbs - basil, rosemary, chives and tomatoes. A salad in the making! I don't know who planted the garden, or who tends it or who will delight in it's bounty, but I love the idea that a person who had maybe lost everything (s)he ever had, believed enough in the future to stick a few plants in the dirt and encourage them to grow. It's the very essence of hope, don't you think? Like spending the afternoon playing memory games with your toddler, it's just another way of saying, "Bloom Where You Are Planted. "
Wishing for you a place to always call your own,
Merry ME
Posted by Merry ME at 10:47 PM

Mary, Mary...your heart is full of hope. You never cease to amaze me.
You are the stuff that life is made of and I am extremely proud to know you. Your post really touched my heart tonight. I think I must...repeat...must...go and buy some card games and take them to the Violence Shelter and Harbor for the Homeless here in our town.
What a phenominal idea. :)

Sending you much love and lots of hugs...

You inspire me! Always.

I do believe you are right, Merry - it is the essence of hope!

What a wonderful gift the seven of you gave with your cleaning and tidying. Much appreciated:)

You give love so freely, Merry. May it be retunred to you a thousandfold.