"How can there be so much difference
between a day off and an off day?
Unknown

I spent all day yesterday at the hospital with my father. He needed to have his pacemaker changed. We were told the procedure wouldn't take too long. It was supposed to be like driving your car into a stall at an old fashioned service station. Out with the old, in with new. Zip, bang, boom.

We checked in at 10am and then waited until after 2 for the surgery to begin. Fr. Georges sat with me the whole time. He helped make the time go faster. With Georges on one side of Dad's stretcher, me on the other we prayed, we talked, we laughed, we dozed. Still, the minutes seemed to stand still. There's no doubt that sitting in a curtained cubicle listening to the beep, beep of the blood pressure machine and seeing every other patient in the room be rolled away to the procedure du jour is a little like watching corn grow. All that sitting made us tired!

I awoke refreshed today to the sound I've come to recognize as the morning revelie of the pileated woodpecker who is drilling a major hole in the telephone pole outside my bedroom window. He is a magnificent bird. Think Woody Woodpecker and you've got a pretty good idea of what this guy's big red pileus looks like. I'm afraid of what he's doing to the pole but I don't want to say anything in case there is a nest inside. I won't be happy if the top of the pole falls off and we lose electricity, but I'll be way, way more upset if the utility company were to fill up the hole and there were baby woodpeckers inside it. I'm doubtful that this is possible, but I'm going to keep mum for a while longer.

Dad's new pacemaker must be working okay, because he slept like a baby. I fixed him brunch then turned him over to my sister for the afternoon. Sweetie and I were taking a day off. Sort of.

First we made a few stops to buy bread, veggies and fruit. Then we headed to an outdoor art show. The sun was warm but not unbearable. The blue sky was full of puffy white clouds. The same clouds that will bring rain and cooler temperatures tomorrow. Today it was quite delightful to be soaking up the Vitamin D and time away.

There were lots of cool things to see and covet. We checked out every jewelry maker looking for something made of "almandine." Almandine is the garnet like stone that has become Sweetie's wizard persona's gem of choice. I'm thinking it was a good thing that we couldn't find an almandine ring, because it would have been really expensive. Sometimes it's more fun to just look and not find so you aren't disappointed when we can't afford you find you can't afford the gem of your dreams. 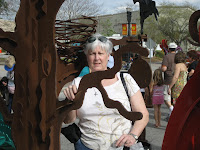 We made the mistake of not getting a snack so by the time we headed for home, Sweetie's blood sugar had dropped. He gave me a kind of "hrumph" when I asked him to take my picture, not once but twice. Then Sweetie turned Grumpy called a passing motorist who happened to turn onto the street crowded we were crossing the "A" word. At this point I figured the afternoon's magic spell was broken. It was time for Cinderella and Cinderfella to get back to the real world.
[Photo: Merry Me standing behind a cool metal tree with black birds on it. That's the blackbird near the top of the photo that didn't quite make it into the shot! ] 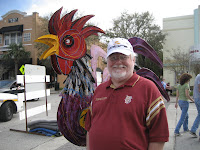 [Photo: Sweetie smiling, but thinking "if she doesn't hurry up and snap this photo, I'm going to pass out."]


Still, it was a delightful way to spend a few hours. I'm grateful.
Merry ME