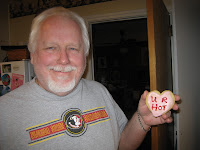 "Success consists of getting up just one more time than you fall."
Oliver Goldsmith
My Sweetie has started on a new journey. Or maybe it's an old journey that is just taking a new path. Regardless, I think it's fun to watch the process.
A few weeks ago he facilitated a 7-week class at a local high school. The class was put together by Junior Achievement to help students begin thinking about a career path. It was not just a "what do you want to be when your grow up" class, although that was certainly a part of it. Sweetie had the teens thinking and talking about morals, values, and personal truths. Sadly, it was a hard concept for some of the them to grasp. As is often the case, the teacher's eyes were opened to new vistas, at the same time as the students. At the end of the 7th week, Sweetie had made a good impression, if not a home run. Known to the students (behind his back til the last class) as Col. Sanders, Sweetie gave the juniors and seniors some sweet tasting food for thought. The seeds of a good future have been planted. Now they just need tending.
The experience was a positive one for my Sweetie. He went back to his JA advisor excited to be given another opportunity(s) to teach, mentor and coach. It is my humble opinion, but I believe it with my whole heart, that these are the things this man was put on the earth to do. He struggles sometimes with his identity and purpose. Like most of us he often asks the question "who am I?" or "why am I here?" His life's road has been a bumpy one. He's not always made good choices, but he's persevered. When he needed to he took some time out, re-grouped, then set out again to find his way.
In the years that I've known him, I've seen Sweetie blossom as has he found his niche - his life's purpose. First he tried on coaching like one might try on an expensive new coat. An I-know-it's not-me-but-I'll-try-it-just-for-fun kind of experiment. As if standing in front of a full-length mirror in a store dressing room, Sweetie turned one way, then another, checking the size and weight of the future on his shoulders. To his surprise, coaching fit. He began to feel at home in his own skin, perhaps for the first time in his life.
So he studied. He coached; he was coached. He studied some more. I watched as he learned to trust in his abilities. The lessons he was learning to help others were working on him, from the inside out. It's not all been rosy. He's had set backs. He's not been bombarded with clients. The country's economic situation often excludes the extras. It doesn't seem right, but at this time a life coach seems more like a luxury than a necessity. Yet Sweetie keeps plugging away.
Tomorrow he goes to another school with the same JA curriculum. This time Sweetie will be walking into a classroom of kids who have actually been labeled "losers," so his approach will be a little different. He has decided to wear a wizard costume, lovingly handmade by ME. The ones who seemingly have nothing more to lose but everything to gain should sit up and take note as Sweetie becomes the personification of everyone's "inner wizard" - the one who's magic lies in defeating the demons of doubt and criticism. His goal is to do for just one of those troubled kids what no one was able to do for him. His prayer is to show someone who is lost in a forest of doubt, despair, anger and sadness, that there is a way out. There is a Buddhist proverb that goes something like, "if we are facing in the right direction, all we have to do is keep walking." By sharing his own story as well as the JA information, Sweetie is going to show the kids that is possible to keep moving forward even when all odds are against you.
Another proverb says, "When the student is ready, the master will appear." We have no way of knowing, but I'm betting that tomorrow is will be the first day of a new journey for the students AND the master. If Sweetie is able to speak to the heart of just one of those present, then I think the words will echo back to his own knowing place. The place that needs to trust he's going in the right direction.
Stay tuned,
Merry ME
Posted by Merry ME at 1:12 PM