Somebody's Got to Do It

(I got sidetracked, but then what's new? ME)
"All places are alike, and every earth is fit for burial."
Christopher Marlowe
I had to get up early for some lab work and to play taxi driver. When I got home I was delighted to see what a beautiful day it had become. A hint of chill in the air, but the sun shone brightly and big lazy clouds streaked against the sky. A good day I decided to take dad out to the new National Cemetery. Normally I try to avoid tasks like this. To me it seems like my father spends an inordinate amount time thinking about his death. I try to balance that by encouraging him to live. Perhaps in the end it all evens out. I think, however, that my looking on the sunny side only serves to piss him off.

Whether it is stumbling around on his walker, trying to predict when "the cancer" will get him, or counting his money, Dad's mind is never too far from his imminent demise and the details that goes along with it. Lately, deciding where to have his cremains interred has been a puzzlement to him.
At first he thought the Peace Garden at the church where he has been a member for over 40 years. Dad has done a lot to dress it up and make it presentable. The "Patty" oak has grown several feet in the years since it was planted as a memorial to my mother. It stands as a silent sentinel at the front of the garden. Dad is afraid that the church is going to fall to ruin and the garden paved over to make room for another Burger King. I don't think that will happen. Still I guess it's possible that it could be, God forbid, taken over by the Baptists!
Next on Dad's list of earthly places for everlasting rest is Arlington National in DC. Personally, I like this idea. I feel like Dad's 25+ years of service have earned him a spot among the heroes. I feel like it would be a dignified burial. It would not be, however, particularly easy (or inexpensive) to get there. This is where pomp and circumstance collides with Dad's practicality. He is most likely going to make a decision based on dollars and cents, even if he's going to be in a box. 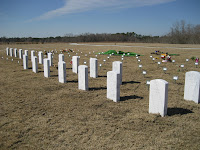 Phase One of the local national (is that an oxymoron?) cemetery hasn't been opened long. Sadly it was doing a booming business today. From what I saw, it looked like the people in charge are quite efficient at getting the job done. In the time we were there, they did two internments and had a cortege lined up for a third.
I was taking some pictures when a rifle salute blasted the stillness sending shivers down my back. I noticed that as the bugler began to play Taps, the flags began to blow in the breeze, as if to stand at attention for those few minutes of the ceremony. 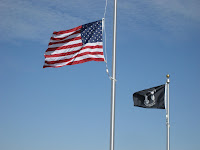 My Dad stood and stared at the surroundings for much longer than I thought was possible. In his silent and stoic way, Dad took it all in. He nodded to the Chaplain who walked past us. He gazed at the rows of white headstones, the casket being lowered into a vault, the dried winter grass and the flags flying at half mast. (FYI: It's lowered 30 minutes before a funeral and kept there until 30 minutes after.)
I looked around myself, but I also watched Dad as he observed what was happening around him. I couldn't help but wonder if he was remembering his days in the military. The smell of diesel fuel on a Navy transport ship, Seabee duty stations, a pretty girl with a hibiscus behind her ear and Naval Academy friends who have already been laid to rest. I know he misses them. I think he's ready to be with them. Does he seem angry all the time because he's been left behind?
It was a nice day. Kind of bittersweet, yet nice. Now Dad has something new to think about. I hope whatever decision he makes it will bring him peace.
Merry ME
Posted by Merry ME at 5:58 PM