I don't think there's anything on this planet that more trumpets life that the sunflower.
For me that's because of the reason behind its name.
Not because it looks like the sun but because it follows the sun.
During the course of the day, the head tracks the journey of the sun across the sky.
A satellite dish for sunshine.
Wherever light is, no matter how weak, these flowers will find it.
And that's such an admirable thing.
And such a lesson in life."
~ Calendar Girls 2003 Movie

After saying goodbye to my sister, Sweetie, Suzi and I hopped back in the car and headed south. We drove the on the same road, but it looked different somehow. I wonder what it is that makes going towards home so different from going from home? With one there is excitement to get where you're going. A sense of adventure and desire, perhaps, to see new things (or connect with old friends and places). With the other there is time spent pondering the things you saw and did mixed with the growing readiness to be home. To sleep in your own bed, shower in your own bathroom, read accumulated mail and settle back into your regular routine. It's weird how the same routine that felt like drudgery before the trip makes me feel homey and settled in.  That circle of going someplace and coming home again, is a little like the sunflower field that prompted this vacationin the first place.  I was coasting downhill into a depressive state. I could feel it slowly beginning to take over. Like clouds covering the sun, life had taken on a gray haze. I had a hole in my heart where Gracie had resided for a week. Johnson informed me the house was in need of some major repairs. I faced the daunting task of finding employment and didn't know where to start.  Staying in bed for long stretches felt like my best option.

And then, kind of like magic, maybe more a chance bubbling up of forgotten dreams, I remembered The Sunflower Festival, in Rutledge Georgia, usually takes place in July. I googled it, asked Sweetie if he wanted to go, he said "sure" and off we went. Like the sunflowers themselves, our trip seemed to follow the light.

It made much more sense to go to Tennessee first because I knew I was going to cut sunflowers. I love the way that being in the mountains helped to revive my sagging spirit and brush the haze away from my eyes.  It was an even better antidote for my depression than Prozac. No wonder my sister feels so good wandering in the hills and streams. 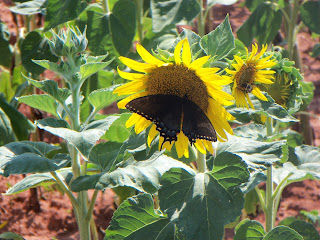 Along the back Georgia roads we'd passed corn fields, tobacco fields, some fields thickly covered with a plant I suspected was cotton. We passed signs advertising fresh grown peaches, watermelon and tomatoes. And then (after getting a little bit lost because apparently the GPS lady never heard of Keencheefoonee Rd.) I looked to my right and as far as I could see stood sunflowers waving their pretty flower faces in a Georgian, come on down welcome. It wasn't our final destination but at least we knew we weren't driving off the edge of the world.


We didn't have much farther to go to find the farm we were seeking. A black dog welcomed us when we pulled into the driveway. Suzi woke up from her highway induced coma to sniff the air and bark. A small wooden house that may have been on that property for 100 years, sat in front of red clay fields filled to the brim with sunflowers. The unusual heat and recent rains, not to mention the 4th of July "festival" crowds, had taken their toll on some of the rows. But you don't realize that when  you are standing in the middle of it all. As if called by the sun itself, I ran to field and let the flowers embrace me. Big ones, little ones, short ones, tall ones the perfect hosts for me and bumbling bees. There was a constant buzz, but gentle, not scary to me like most bee activity.


Anywhere in the south in the middle of July is going to be warm. Let me say that on this afternoon it didn't take long to work up a sweat. Sweetie took a couple of pictures, then headed back to the air conditioned car with his trusty sidekick, She Who Sleeps. I walked up and down the rows like a kid in Toys R Us before Christmas, not knowing where to start, which flower to cut. For $15.00 you get a white plastic jug to fill  up with as many flowers as you can fit in.  If I were to go back I'd know to look for the flowers that had not yet bloomed all the way. I got one like that and it's been fun to watch it open up a little more each day. The bees fly away as soon as the flower is cut and surprisingly to me, there were no other critters that hitched a ride to Jacksonville.


All in all I'd say we spent about an hour at the farm. Definitely a long way to go for a bokay of flowers. Yet, like the tulip fields outside of Seattle, and Poinsettia fields in So. California, it's amazing to see row upon row of Mother Nature's handiwork beckoning you into her world.


Just like that the trip was over. Well, not exactly over, we still had about 300 miles to drive. We opted out of staying another night in a motel. The allure of home kept us moving. At
times we were the only ones on the highway in either direction. It's pretty darn dark out there. I asked Sweetie a couple "what if?" questions, which he hates but played along with me as he'd done from the first mention of the trip.


ME:What if a critter ran out in front of us right now?
S: Keep driving.
ME: But how do you drive with a dead deer on the hood of your car staring at you with blank eyes and his bloody tongue hanging out.
S: If you hit him hard enough he'll fly over the car.
ME: Just so you know. If that ever happens I'm going to slam on the breaks from instinct. Oh, and I might close my eyes too.
Sweetie made a mental note not to let me drive down woodsy roads after dark.


ME: What if, after we hit the critter and I slammed on the breaks and we ended up in the ditch and there's no cell  phone coverage because we are so far from civilization?
S: We'd sit here until someone came by.
ME: What if nobody came by for days? (This is not such a ridiculous question as I just read that a 70 year old woman got stuck in a water filled ditch near Sanford, FL and sat there for 3 days before a forest worker happened to see her car. I think my Girl Scout stay where you are training would have been put to the test after the first day. Then I thought about the alligators and figured that lady made a wise decision.)
S: We've got apples and water and 1/2 bag of potato chips. We'd survive.
I love a man who is quick with the answers that will calm my nerves.


We pulled into our driveway about midnight. A long 12 hour day, filled with new friendships, fond farewells, new adventures and gratitude for safe travels.  Sweetie pointed out that if we had a motorhome to make these trips in, everywhere we stopped would be home.  That's true. It's also true that if we had a motorhome, he, the only one who could drive the thing, might get sick and I'd have to drive and what if I ran into a ditch and there were bears in the woods that could hear me screaming, "I told you so" and came to investigate. What then?


Today I'm filled with gratitude for the reminder that home really is sweet. For sunny flowers that make me smile. For stories to share and friends to share them with.


Wishing for you a lighted path to travel with no critters in the road,
Merry ME