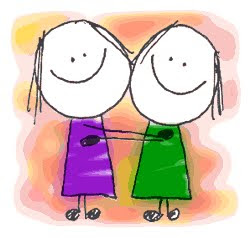 There are few things that can make the mother in me want to turn and run. For instance, I can,
at the sound of a young child standing at the edge of my bed in the wee hours of the morning, crying, "my stomach hurts" go from sound sleep to full speed in a matter of seconds.I've learned "my stomach hurts" is usually followed by projectile vomiting.
Or, though more gross than anything else, is the coughing, hacking sound, usually emanating from another room that you can't get to fast enough, of a cat hacking up everything it just munched from its food bowl. Cats seem to think this ball of bile-covered, unprocessed cat chow is like a gift from the Gods that should be left in the middle of a rug for all to see and admire.
Then there are the sounds of a college student, full of excitement and wanting to share. Let me just say some things are better left alone.
But up there at the top of the list is the sound from a child wearing Mickey Mouse ears, carrying a stuffed Goofy bigger than she is, whose eyes are wide from a combination of excitement and too much stimulation, begging to go on the "It's A Small World Ride" one more time. Now I admit that the first time one travels through this global wonderland it's a thrill even a jaded grown-up can enjoy. Gliding through one simulated continent after another, seeing the costumed dolls and listening to them sing each in their own language, is pretty darn cool. But, eventually the sights are overcome by the hypnotizing song. Before the ride is over, almost every adult on the boat that continues to knock annoyingly against the side of the fake stream it's riding on is ready to jump out and strangle an Alaskan Eskimo, African dancer, or Swiss yodeler. Of course, this desire is curtailed only by the look of delight on each child's sweet face.
Seriously, though, once in a lifetime is enough.
However, obnoxious the ride is, the sentiment behind it is spot on.
It is a small world. In every country on this globe, people are the same. We may look, speak, and dress differently, but our core humanness is the same.
And then there's that whole 6 degrees of separation thing, which I've never really understood. What Kevin Bacon has to do with anything is beyond me?
By now, if you are still with me, you are undoubtedly asking yourself, what is her point. Well get a load of this. My sister wrote me last night that one of her friends is a good friend of my good friend Dani's mother in law.
What are the chances?
I meet Bella in a store on a day I'm looking for spiritual healing. Bella leads me to Terri and bonesigh arts. Terri leads me to Dani whose MIL lives in Yakima and plays bridge with Gwen who is my sister's friend in Selah.
Or look at it from Dani's POV:
Who knew that I would be transplanted to the midwest, find Terri at a gift shop, and through Terri, find you who has family in the pacific nw, and a sister who has a friend who is a friend of my mother-in-law.
Or Terri's:
There she is selling bonesighs to shops that "get" her message. She meets Dani. She meets me. And the ripple effect just keeps on going.
Much as I hate to say it, "it's a small world" is a tune I'll be singing in my head for the rest of the day and smiling at the serendipity of it all.
Wishing for you a day full of sweet music and maybe a little yodeling to go with it,
Merry ME
Posted by Merry ME at 11:11 AM

Oh Oh Oh ! I loved this post - You made me smile and laugh ... I can remember the vomiting so well! It was a Lo Mein kind of a night - ewww! I really enjoyed being of mom to two little boys - I just knew I was meant to be there mom. Thanks for the compliments about my blog. When I have my final home - still looking for a place to land - I'll use those colors and seafoam and pale pinkish shell. Peace in my heart and peace to you, Jennifer

this is the coolest thing, mar!
loved this. so so so made me smile.
what a small world!

It is a small, small world...I had at one point in my life moved to Portland, Oregon and when I arrived there met people I had grown up with...it cracked me up!
And even on the occasional fishing trip to upper Wisconsin or other parts to many to mention, I always seem to run across someone I know. I am totally convinced of the 6th degree connection...and I'd love to meet Kevin Bacon...I love his music! Ha Ha

As for cats and kids waking up hacking or 'the dreaded other' in the middle of the night, not so much...I can leave that one well enough alone for a life time but I'm sure my Grandmotherly instinct would kick in for sure if it did indeed happen, lol!

Wishing for you a Day of Joy Miss Mary Fancy Pants! :)