"15. The Sweaters.
Every one of the cardigans he wore on the show had been hand-knit by his mother."*

I will sure be glad when(if) I stop having to deal with waves of heat that come from nowhere, with no warning or apology, and engulf me like a Saharan sirocco.  If my mother was any example, even the hottest woman will one day fend off a chill by wearing a light sweater in the middle of summer.  I keep my fingers crossed. 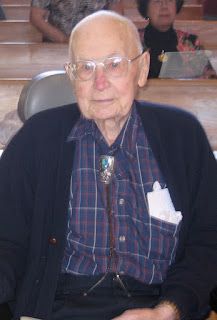 My father had a thing about changing the air conditioner thermometer. He demanded it be kept at an even 78. Anything above 78 and the air would come on. Aytnhing below, the heat. 78 seemed to suit him perfectly. Not too hot. Not too cold. He was  just right. He had little sympathy for his estrogen-deprived daughters until the year before he died. We were all here at the same time. Make no mistake, there is power in numbers. Dad conceded to a brisk 2 degree drop.

In his later years Dad never went anywhere without a few tissues in his pocket and a sweater. He'd lost a lot of weight. He didn't have much fat to keep him warm. Dad had three sweaters that he rotated. Cardigan's, from LL Bean. One made of wool, the others acrylic. He hated having them cleaned because it made them stiff and scratchy. Around the house he alternated between the brown and light blue. He saved the navy one for dress-up and church. He didn't alter his wardrobe much.

After a person dies, the ones left behind are faced with sorting through the deceased's clothes, trinkets, and memories. The things that helped make that person who they were. Take Mr. Roger's for instance. Someone had to decide what to do with all those sweaters. Maybe his went to museums somewhere. A few of my father's belongings were divvied up between grandsons and sons-in-law, most went to the Goodwill. I couldn't part with the soft brown sweater. It rests on the back of my computer chair, kind of like a dog waiting for it's master to return home.  No I don't expect that Dad will come back looking for the sweater. But I do wear it when Sweetie, aka Nanook of the North, throws open all the windows to let in a blast of Arctic air. It's warm, but not too warm, and has pockets. Mostly it's soft as old sweaters and shoes get after being worn for years.

Sweetie and I were lured into a store today with a coupon for 10% off clearance priced items. While Sweetie looked for a bargain, I wandered through the men's department with no agenda. That's when I saw it. A navy blue cardigan sweater, with pockets. I couldn't NOT walk over to it. I touched it, tentatively at first. Then grabbed the sleeves in both hands and rubbed the soft acrylic yarn across my cheeks like one might do with a baby's blanket, fresh from the dryer.  I noticed how soft it was. I noticed how quickly the memories carried me back to a Sunday morning, sitting next to Dad in the front pew. I noticed that I could hold that sweater and the memories without coming undone. I missed my dad, but not in that I-can't-breathe-I've-got-to-get-out-of-here-this-second-before-I-pass-out way.

Next Wednesday will be the second anniversary of Dad's death. I'm aware of the feelings that is stirring up. Maybe this year of noticing is helping me look at what's right in front of me, not what I've lost. "Time doesn’t heal all wounds, said Ellen Seldman in a Woman's Day article, "it refreshes your sense of hope. It helps you to see all the possibilities that exist instead of mourning the ones that don’t." I won't kid myself, I'm still mourning. But like April tulip bulbs in the Seattle sun, I'm beginning to bloom again after grief's darkness.

*15 REASONS WHY MR. ROGERS WAS THE BEST NEIGHBOR EVER. http://articles.cnn.com/2008-07-28/living/mf.mrrogers.neighbor_1_mr-rogers-neighborhood-fred-rogers-koko-tv-station?_s=PM:LIVING