"...But a writer's desk always tells the truth about the person who works there.
So if you really want to know about who I am ... take a look at my desk. "
Eyre Price*

I have a desk. Quite a lovely desk across from Sweetie, in the room we call the office. The problem is I've run myself out of it. It's cluttered. Claustrophobic. Intimidating. Like one must work there, not create, i.e. play. So I moved my computer into the den. My desk is now my lap. There's lots of light, the TV if I want it, the stereo if I want that. I'm next to the kitchen, to better hear the call of chocolate chip cookies. I can see out the living room window. Admittedly, without the trees this is not the view it once was, but it is a view. And I have lots of flat surfaces on which to put things.


"Then there's the joy of getting your desk clean,
and knowing that all your letters are answered, and you can see the wood on it again."
~Lady Bird Johnson

Yesterday I was determined to clean up some of my mess. I may have said that every day for the last month, but I was determined. Just one problem. When I got into the middle of one of the piles I discovered a whole batch of cards I've been meaning to send out. Instead of burying them again, or heaven forbid, putting them in the card box never to be seen again, I altered my plans. I actually wrote some letters - not long newsy letters, rather, the kind that say, Hi, I'm thinking of you. The kind that add sparkle to an ordinary day. Don't you love to get an unexpected something in the mail?

Next, in order to clean up the end of the couch that no one ever sits on, but calls to me from under the detritus crap, I had to move Sweetie's new pants. Again, I might have just moved them to the bedroom and forgotten about them, but decided instead to hem them and be done with it. Hell, my sewing machine has been at the ready since before Christmas. Why not put it to some good use? The problem with that is I also had to pull out the ironing board, the iron, electrical cords, pin cushion, tape measures and scissors. Then I had to move everything off the sewing table so I could sew. Can you guess where this is going?

The good news is that by the time Sweetie's new British detective series came on at 10pm, the pants were hemmed and I'd made the binding for one of the Christmas quilts that never got finished. The bad news is the couch still has some piles, albeit smaller ones. And while I can see the glass top of the table next to me, I can't in all honesty say the job has been completed.

All that to say that I didn't "notice" much yesterday except that I'm rather scattered when I clean.  I did, however, smile every time I passed by the stack of letters ready to be taken to the post.

My writing group is in the process of putting together an e-book. We are at step one. Write an essay on "why I write." I think everyone in the group hit the first deadline with a rough draft. Since then only two of the 12 have revised to the point of completion. Another of last week's goals was to pull my essay out and get to work on it.  I dare say re-writing is the bane of every writer's writing.  I did some revision, but got stuck on an idea I didn't know how to put into words.  I think my very first memories of writing for pleasure came from writing letters.  I really, really enjoy the process of writing, mailing, and receiving letters. Sadly, like most other people, I've gotten caught up in the ease of social media. I don't send letters as much as I used to.

I'm not sure when I transitioned from letter writing to story-telling. Perhaps I never have. Because really, the best letters tell a story, don't you think? My blog is sort of an extension of that. 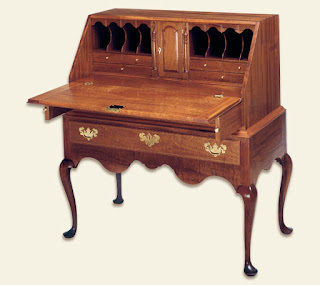 Another reason I enjoy writing letters is all the accoutrements. Perhaps in another life I sat at a hand-crafted desk with little cubby holes and drawers. Unlike the picture to the left, it would not have been so clean. There would have been  piles of monogrammed stationery, feathered quill pens and ink in a variety of colors that stained my fingers. Today I've never met a pretty piece of paper I didn't like. I surround myself with pens of all kinds. I hate, and often swear under my breath, when there is a line at the post office but that makes getting to the counter to see all the new stamps all the sweeter. Computerized stamps may be convenient, but they do nothing to add to the beauty of a hand-addressed envelope. As an aside, no one in the world addresses an envelope better than my daughter, Weneki. Seriously folks, she's an artist.

Today, I'm (re)noticing my love of letters. I hope I can turn that into a decent "why I write" story.


"We write," said Anais Nin, "to taste life twice, in the moment, and in retrospection."
Why do you write?

PS I've got to be honest. Part of the reason I write is to ignore the piles that need to be picked up.

There is definitely something magical about receiving a hand written letter or card, as there also is something about the warm feeling in the steps that lead up to preparing to send one. The special thoughts that provoke one to write the letter initially is a powerful feeling.

I always have great intentions to do so, and then get caught up in the whirlwind of life. When I have stopped those few times and actually sent an "old fashion" card/letter, it lifted my spirits, and I hope to those of the received.

In writing my "response" to you I have realized that even if I don't get those cards and/or letters out I need to be thankful to have those special people in my life that make me want to send a card to, and still find a way (even if it is through our new fangled technology outlets) to let my loved ones know they are loved.

Therefre, in closing of my lengthy resposne, today's post has inspired me to give in more to the urges to put pen (or a #2 pencil :)) to paper but also find appreciation in the urge to even want to.

P.S. You are one of the above mentioned - I love and appreciate you, more than actions and words could express! :)