It's not that I didn't notice anything yesterday. I did. But I didn't get it posted. If you what I was busy doing instead, I don't think I could tell you.  But I wasn't so busy I couldn't be drawn to the beauty of the flowers in the front yard.

Ever since the trees came down the yard has been in a perpetual state of repair - read pretty darn ugly. Brown patches in the grass. Big craters in the driveway. Mud everywhere.  I try not to look at it. John has a vision. He's shared it with Sweetie and me several times. I'll be honest. I can't quite get the picture in my mind. But let me tell you, that man child can do some manual labor. We'd be lost and broke without him.

Need roots dug up? Call John
Need a sidewalk shaped, readied and poured (including hauling 80 lb. bags of cement)? Call John.
Need sod laid and watered? Yep, John's your man.
He's even been taking care of some of the outdoor plants that I forgotten about.
Like the orchids. 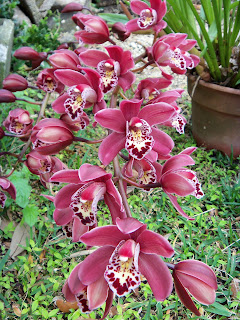 My sister sent this orchid plant to my Dad several years ago. I've cut it back and transplanted it once. That's it. I don't fertilize it, water it, trim it. Like I said, I basically forget it all year until December rolls around. About the first freeze I think to go out with a sheet and cover it up. That's when I notice the buds. And every year, about this time, the thing raises it's blooms to the sun and shouts to the world, "hey, look at me." There must be a metaphor in the orchid's constistency to bloom regardless of the circumstances.  I always thought orchids were prima donna, hot house flowers that needed to be grown in a year-round climate like Hawaii.  I'm amazed that they are as tough and resilient as they are.
Yesterday I noticed that the buds had opened up. The beautiful centers are peeking out. When I stand there and look at them, I swear they take my breath away. 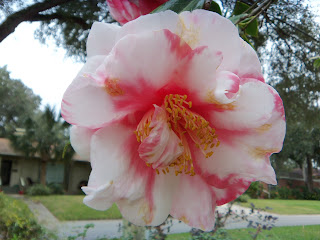 Right next to where the orchids is a cameilia bush. Well, it's actually more of a tree than a bush. And after I got done pruning it a month or so ago, it is a rather scrawny looking tree. I wanted to cut it almost all the way down to see if it would grow back like it was originally intended. The yard man didn't think this was such a good idea. Neither did John or Sweetie since it might have required a chain saw. Apparently, they don't think I can handle a chain saw. What's that all about? Well, naked branches or not, those pink and white flowers defied all my attempts at killing them. Oh my. That is sure some kind of pretty flower. A preacher friend has declared the camellia God's most beautiful creation.  I have to admit it is pretty high on the list. My mom used to float the blooms in a large cut glass bowl. Except that what's left of the tree might scream if it saw me coming near it again with shears in my hand, I may go get me a couple and put them on my night stand. 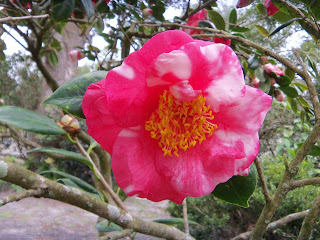 Pretty flowers are wonderful to take note of. What's blooming in your yard? Or are you looking at plant catalogues and already planning your summer garden?

Those flowers are beautiful! I remember seeing the camellia in a glass bowl. Made me smile inside and out, flooding back to childhood memories, and Pat-Pat's sweet smile and kind eyes.

Thank you for sharing God's beauty through the flowers and your words.

Well, as you well know, I've nothing here in my yard or garden that is blooming however!...I do have a garden of flowering Sister/Friends that bloom and show their beautiful colors each day and guess what? You're one of them! :) A bright and beautiful Sunflower, with her face turned towards the Sun!
xoxoxo