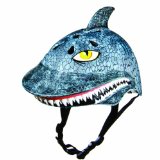 This afternoon while waiting for Sweetie to check out at Wally World, I mosied around the empty - except for huge pallets of patio furniture - garden center. Actually, there were also bags of charcoal, a few measly herb plants and three racks of bicycle helmets, sans bicycles. Not your ordinary black or glitter pink helmets. These were helmets that looked like dinosaur, monster, or shark faces. If you put one on, say the shark face, and went riding down the street, it might look like Jaws had learned how to ride a bike and was coming after you. (Doesn't Jimmy Buffet sing about Land Sharks?)

Well, you know I couldn't resist. First I tried on the cyclops eye ball. Then the shark face, then the dinosaur.  And yes, a few people chuckled as they passed me by. I was trying to scare Sweetie, but he just laughed.  Maybe you have to be under the age of 5 for these helmets to scare people.

I noticed, while trying to get my adult-sized head into the child-sized helmet, that these protective devices come with operation manuals. Huh! Granted I was raised in a time when parents scoffed at the dangers of helmet-less bike riding. I doubt seriously if bike helmets had even been invented.  When kids of my generation (and those before me) learned to ride a bike, falling was part of the lesson. Why else do you think Mercurochrome was invented?  All the kids I knew sported red-painted knees and elbows. And we were told to stop being a baby when we cried because of the stinging. I'm pretty sure the stinging was worse than the pain of falling which is why we repeatedly returned to the bike in search of that  magical moment when balance and persistence came together. There is a moment when all bike riding trainees realize there is no adult holding the back of the bike and they are pedaling on their own. For the rest of their lives, when people tell them, "it's just like riding a bike," they will remember that "I'm doing it!" feeling

It turns out the FDA took Mercurochrome of the market because it contained mercury and was "not generally recognized as safe and effective."* You tell that to all the mothers who kept a bottle near the back door rather than the bathroom medicine cabinet.  "No one's offered evidence of mass Mercurochrome poisoning" but since Mercurochrome contains mercury, the FDA in all its wisdom banned it's sale.

Kids growing up in the 1950's faced a lot of challenges. They had to play outside until it got dark. Cap guns were the weapon of choice. Swings were made of good, stout wood. Sprained ankles were wrapped in flesh-colored ACE bandages and we went to school without a funny shaped boot.  We played in the street and climbed trees. We spoke to strangers, but rarely talked back to our parents. We splashed in mud puddles and swam in lakes.  We ate cookie dough straight from the bowl. Whole milk was served at every meal.  It's a miracle any of us survived - without instruction manuals.

Ah, those were the good ol' days.
Merry ME

*http://www.straightdope.com/columns/read/2518/what-happened-to-mercurochrome
Posted by Merry ME at 5:38 PM

Oh my Goddess you're a hoot! You sure did bring back some 'red' memories though! I hated that stuff and do you know I just recently threw out some of the Mercury laden stuff a few years back? I never even realized they took it off the market, lol. Those were the good old days Mary, and it's too bad our kids can't know that freedom we once had.
Wish I could've been at Walmart with you and Sweetie to see the 'crowning.' I'd have cheered you on Sistah! You go brave girl!
xoxoxo