" ... I wanna sleep with you in the desert tonight
with a billion stars all around
'cause I gotta peaceful easy feeling
and I know you won't let me down
'cause I'm already standing on the ground ..."
The Eagles - Peaceful Easy Feeling

Merry Me Note: I'm changing the way I do things. I'm going to put NEW pictures at the top of the post instead of at the bottom. I'm hoping that will prevent me from having to fix the spacing every time I add something.

This pic doesn't capture it, but it hints at the peaceful easiness that I sense when I see sleepy Lou in the room with me. He spends so much time in hiding, but sometimes he just can't help it and has to come make himself known and let himself go. He's got a fair amount of angst in his bones, but he sets it aside about once a day and I love witnessing it.

3. I'm not sure of the ethicacy of sharing someone else's blog pictures. I just got a bunch of photos from Jon Katz ... the man stays pretty busy with his dogs, writing and farm, but never fails to fit in a good amount of picture taking every day. Here's a link to a picture of his dogs that totally says, "peaceful, easy feeling" to me. The path no longer has snow on it which has got to be cause for a celebration! But the remarkable thing, according to Katz, is this is the first time all four dogs were on the path together, off leash, and not battling for the position of Alpha dog. Don't you know they are just soaking up the sunshine. I think I hear John Denver singing in the background!

2. Sorrow sent this picture. The beauty and gentleness makes me weep. It certainly does capture a peaceful easy feeling. 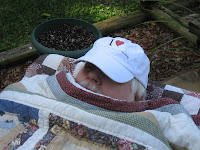 1. Sweetie says he'll never live in the NE again. Too cold. Too much snow. South of the Mason-Dixon land is about as North as he'll go. So imagine my surprise when we were playing around on findyourspot.com and he checked the box that said he was only interested in living in the NW. It makes me just want to hug his neck!

He doesn't like to shovel snow, but this guy I love sure does love to sleep with the air conditioner turned down low enough to form icicles on his eyelashes. Since Dad is in control of the AC control Sweetie settles for the next best thing. He turns the ceiling fan to high! Slightly cool air swishes around our bed at night like rotor wash from a hovering helicopter. That's about as good as it gets in Florida.

Unless it's March and the outside temps still have a bit of chill in the wee hours of the morning. I snapped this picture when he was sound asleep on the patio. With only his nose showing he was almost in his version of Eskimo heaven.

Love both the pics, and know the one little pixie in one pic.
x

A woman - a camera - her passion. Put them all together and what do you get? "Restus Interuptus." In truth, I was not asleep. I was aware she was there with the camera. I stayed perfectly still so as not to spoil the moment. I somehow knew this "snap - shot" would get to the blog. Immediately after the shutter snapped, I shivered, and asked about the Alpaca blanket hidden somewhere in a closet. Viola - it appeared, spread itself over me and then let me slip back into my snooze. You should also know the secret to sleeping in a woven fabric launger. Put a quilt on the lounger first. Ad person, another quilt and with any luck at all an Alpaca blanket. Very snug, very warm, conducive to sleeeeeeep.