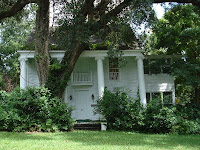 I live in a neighborhood that was once a plantation owned by John Sammis. According to local history the tract of land was part of a Spanish grant to a man who established one of the "first water-powered sawmills in the county." In 1837 the operation of the the mills was turned over to Sammis, a New York ship builder, who in turn sold the property to a New Jersey religious group in 1873. There is some question about when the original Sammis residence was built, but it still sits at the end of my street.

At the other end of the street is the plantation cemetery. When you're a kid growing up, having a cemetery on your block is cause for all sorts of scary stories about ghosts and boogie men. I used to walk through the overgrown foliage and wonder about the lives of the people who were buried there. To a white girl growing up in Florida in the days of separate bathrooms and water fountains, I tried to guess if the names on the headstones belonged to plantation gentry or slaves. As an adult, the cemetery holds more of a historical interest for me. I just read that one of the "oldest tombstones in the county was erected there in 1841." 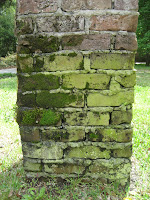 As you near my street two brick posts stand on either side of what has always been a main road in and out of the neighborhood. I don't know for sure, but I think they are all that remains of the plantation gateposts. As soon as I saw "a bricky thing" on the Scavenger Hunt list, I knew I wouldn't have to travel very far for a good photo op. None of these shots shows the whole gate post but I think the moss and hook are pretty cool looking. I couldn't decide which I liked best so I included all three. I particularly like the tiny white snail hiding out in the midst of the moss. 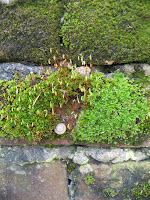 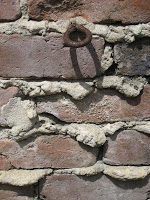 Here's hoping there are some interesting brick-y things in your world,
Merry Me
Posted by Merry ME at 5:16 PM

I went to Savannh for my 50th birthday. And I was fascinated by the grave yards in the city.
Never got to see a plantation house though, so gotta work on that ambition.
xx