Having Johnson around is like having my own on-call weatherman.
"A storm's coming," he said this morning. "It should be here in about 3 hours. Lots of rain and then it'll turn cold."
I've learned to take what he says to the bank.
After the allotted time, as if on cue, the winds started howling, the sky lit up with lightening and hail began pinging off the roof. Maizey, who had been sound asleep at the end of the bed, woke up and started pacing. Neither dog likes boom booms.

Since the back door was open, Sweetie and I watched as his beloved elephant ears were tousled by gale force winds. The sky was dark grey. When the electric transformer blew on the street behind us, sparks popped and sizzled. I went around lighting candles. Sweetie pulled a chair up to the picture window and watched for any sign that the neighbors' trees might topple.

Then as suddenly as it started, the storm was over. There were branches and twigs the size of Christmas trees in the yard but we didn't give it much more thought. Until it was time to go to work. Around the corner, a pretty big tree blocked the street. Sweetie turned around and tried another way out of the neighborhood. He didn't get very far because two more trees lay across the main road. On the third street, another tree had landed half on and half off someone's house.

Some of the trees in our neighborhood have been here for over 100 years. The water oaks rot from the inside out so it doesn't take a big wind to knock them down. Today's storm appeared to break them like  match sticks, not the stately sentinels they have been for so long. As much as I hated to seem them go, I'm grateful we cut down our trees a few years ago.

After the storm passed by everything was eerily quiet. I didn't hear as much as felt the trees crying. It would be a few hours before the sound of chain saws filled the air. It's been 7 hours and JEA trucks are still at work cutting up trees, fixing wires and making the streets passable. 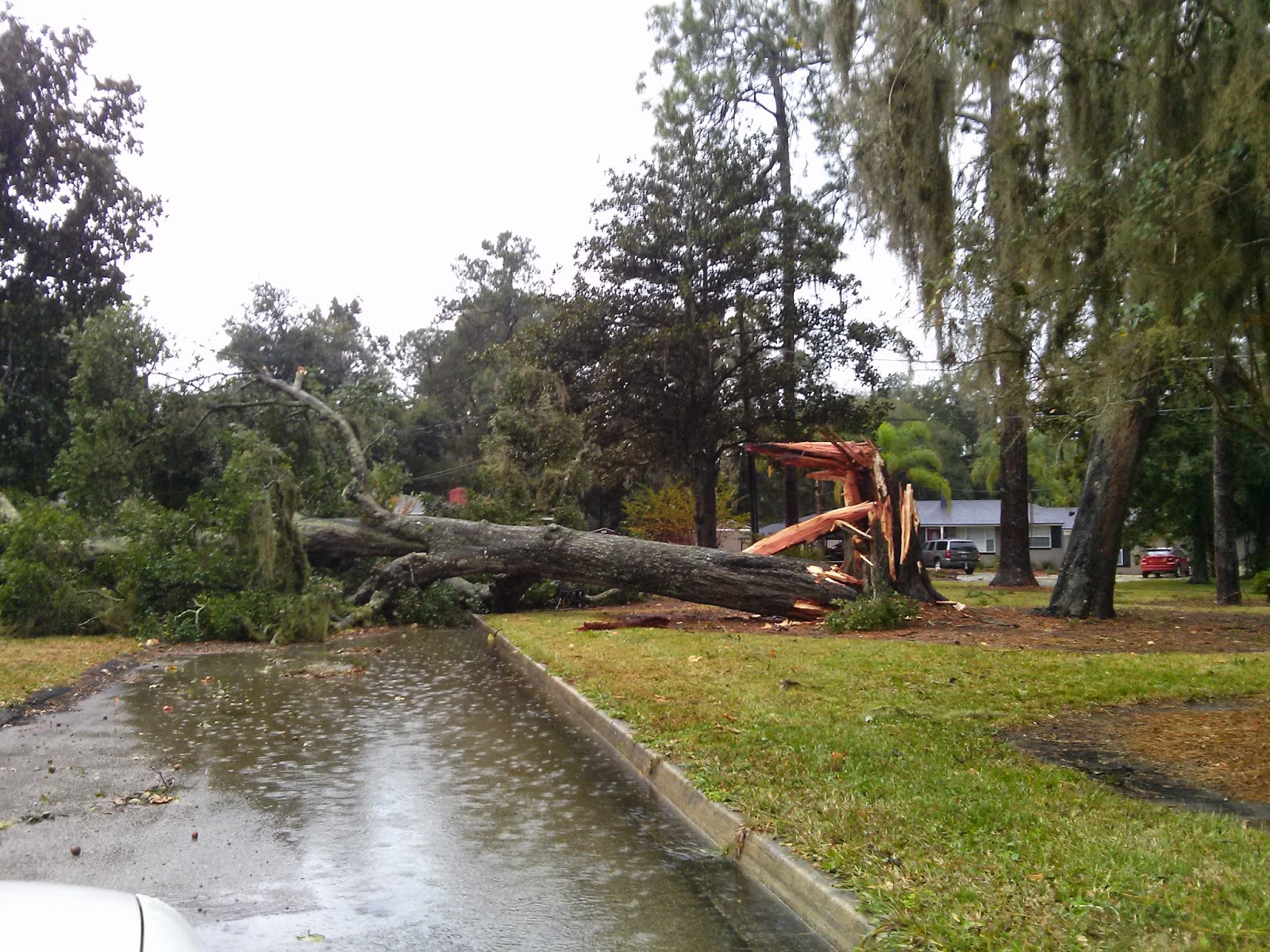 Turns out, it was no ordinary storm. Wind gusts were up to 67 MPH, and a few funnel clouds came close.

I'm pretty sure that tornado safety procedures do not include standing in front of an open door, or plate glass window. I've got to say a little big prayer of gratitude that we weren't whisked up and taken to the Emerald City.

Just another reminder not to mess with Mother Nature,
Merry ME

Just reading this and I am glad you are okay....you and Sweetie. If you are going to sit in front of a plate glass window and watch the "show"....make sure to put on your ruby red slippers. That way you don't have to remove them off anyone once you get to your destination. ;)