I don't call it Random Thoughts for Nothing

“Sometimes, if you stand on the bottom rail of a bridge
and lean over to watch the river slipping slowly away beneath you,
you will suddenly know everything there is to be known.”
Winnie the Pooh

1. I find just about all the wisdom I need to have in simple little quotes by Winnie the Pooh. Although he is a bear of very little brain I find him wise beyond measure.

2. It has been raining off an on for a week. The sun peeked out from behind a cloud this morning but I think I see some more dark on the horizon coming our way. I don't really think it's fair to complain about rain. But then I haven't been flooded and no trees have fallen in our yard. We did notice a few wet spots on the dining room ceiling last night, which may mean a tiny bit of a leak in the roof. I am feeling grateful that it was not a torrent of rain that came poured into our recent birthday celebration.


When you l ive in Florida you get used to the rain. But unless it's a hurricane brewing we don't usually get extended periods of precipitation. Most of us can count on a quick hit and run thunder storm in the afternoon. That's just part of the Floridian ambiance. The long drawn out rains, or heat, or cold, seem to put people on edge. I think it's because they are used to having too much of a good thing. Or maybe it's because they are weenies. Who knows? 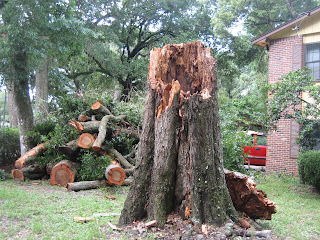 This, however, is what happens when a week's worth of rain meets a hundred year old oak tree. 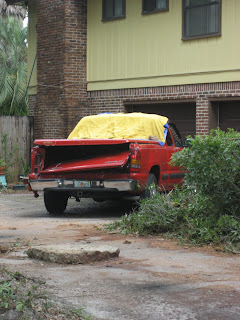 And this is what gratitude looks like when you find that the hundred year old waterlogged oak tree that was standing in your yard when you left for work has fallen and miraculously missed your house. I'm guessing it's way cheaper to replace truck parts than a whole new roof.


3. I'm back to knitting baby hats. There is something both pleasing and relaxing to know I can pick up some yarn at the beginning of some TV show that serves as background noise and have a finished project by the time the nightly news comes on.


I'm not a very accomplished knitter, I can't Y/O or do a cable stitch, but I can K1, P1. I don't quite understand the whole gauge thing - as in the calibration it takes to figure out that if one is knitting with a particular yarn, x number of stitches and x number of rows will = x number of inches. With that information you are supposed to be able to vary the size of the needles or number of stitches to make the item you are knitting the size you want it to be. I tend to use the needles and yarn at hand. Thus my baby hats are a variety of sizes. All are small, but some smaller than others. Or as in the case of the last one I made, bigger than the rest. I think I'm going to start carrying a hat or two with me and when I see a baby I can ask permission to try on one on. That's really the only way I'm going to know if I'm knitting for premature or gigantic babies. 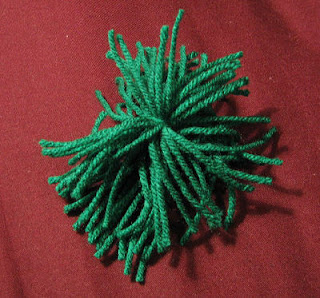 The problem is, after making over 100 hats, I feel like I need to branch out some.I'm a little bored with plain hats. Instead of learning a new pattern, I think pom poms might be nice. There is, however, one small problem with this out-of-my comfort-zone decision. I have discovered that I am pom-pom challenged. If you look at this photo, you will see what I mean. My 2nd attempt, which I have chosen not to photograph because it looks remarkably similar to this one as well as something the cats think they have done in and need to drag around the house to showoff their yarn-killing prowess, is no better. Sadly this is about as good as I get. I have conferred with my sister who could win a pom pom making contest. Since I'm doing everything she said to do, the only thing we can figure is that I'm not wrapping the yarn enough times around the piece of cardboard. Good Golly Miss Molly, how many times is enough? 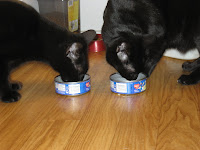 4. Speaking of cats, here are a few cat photos I've taken recently. The first could be a Starkist Tuna commercial. The only fishy smelling food these black beasts get is what is left in the tuna can after dumping it into a bowl for human consumption. Like Pavlov's cats they come running and salivating at the sound of the electric can opener. Photo #2 is one of the 8 cats that live across the street. I've thought about putting Spay/Neuter reminders in the neighbor's mailbox but I doubt that would make for neighborly relations. Photo #3 is Carol O'Dell and her 20 lb. cat. He doesn't usually come out to visit but when the writing group was there working on our vision boards he became part of the group. 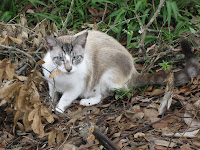 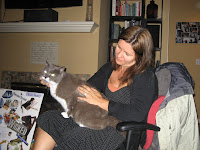 5. And one more comment before I turn my thoughts to dinner. In April of 2007, I wrote a post about Boob-eez. A product that was invented by a 10 year old girl to keep her budding breasts from showing through her t-shirt. Last week I got this comment: "I am now 12 years old and finally found your sight! i am so thankful to have someone care about my product, and just to let you know, they are great for woman like you! once again, thanks! carlie christenson" I was thrilled that this yound entrepreneur took time out from her marketing campaign that has apparently put Boob-eez on the map all over the world to write me a note. In the two years since I first wrote the post, I'd like to think I'd gone on to loftier thoughts and writings. But here I sit wondering what did Carlie mean - a woman like me?

That's enough randomness for one day.

A lovely collection of randomness ( is there such a word?)
Me, I'm more of a Tigger sort of person, as I like bouncing around the place and being generally annoying to those that aren't!
xx