Lunch with a Friend

"Life isn't a matter of milestones, but moments."
Rose Kennedy

There is a woman at church to whom I'm greatly attracted. Her family has been attending the church for as long as my family (well over 40 years). I went to school with her son, but my only memory of him is walking through a sticker patch to get to the university across the street where we attended Sunday school. Boy that memory alone tells you how things have changed! For one thing the sermons must have been really long, because it took for ever just to get to the SS classroom, let alone learn any Bible stories. And what parent today would let their school aged children go traipsing off across a major thorough fare. Today it's a well-traveled 4 lane road today, maybe back then it was only big enough for a horse and buggy.

But I digress. My point was that even though I've known the family for a long time, I have not had any real contact with Beth until recently. I was busy taking care of my mother and she was taking care of her husband. It seems like after they both passed away there was more time for Beth and I to chat.

By today's commercial standards Beth would not be called a beauty. Personally, I think she is one of those people whose beauty goes way beyond skin deep. I think she may be the most regal woman I've ever known. In fact, I think she is the only woman I've known who could be called regal, in a Grace Kelly kind way. Though she walks with a limp, Beth is nothing less than statuesque. Her white, white hair is always tied in a knot on the back of her head. (I imagine her letting it down before bed, sitting at a vanity table and brushing it 100 times, like in old time movies.) Her smile is subtle, her eyes twinkle. She is a water color artist, reads just about any book she can get her hands on, writes poetry, and oh by the way knows all there is to know about Florida mosquitoes! I think her life's dream was to go to medical school, but like many women her age, when opportunity knocked, she was knocked up. She was married for over 60 years and raised 4 children, with whom she seems to be very close.

Beth is the kind of woman I would like to be. Maybe I'm getting there but it feels like I've got a long way to go. Unlike me, she doesn't say "one of these days I'm going to .... " Instead, she does it. Which is why I've been invited more than once to share a meal with her.

She's been promising me one of her watercolors for months (because I blatantly told her I wanted a BB original! Subtlety has never been my strong suit). She made me promise that I would tell her the truth and if there was nothing I liked she'd paint some more to choose from. Well, she called on Monday and we set a date. Lunch at her place. I kind of felt like I'd been summoned by the Queen. Not a mandatory command performance, more like something that you get excited about and dressed up for. 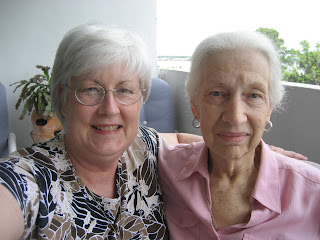 Of course, I was late, but not by much. Ha! (Unlike in horseshoes, I think late is probably late) I cut some gardenias from the back yard to take to her. As I was walking out the back door I noticed the good smelling flowers were covered in itsy bitsy black bugs. My sister assured me gardenias always come with these little critters, they're part of the charm. So I wrapped a wet paper towel around the stems and flew out of the house minutes before I was due at her apartment.


When I arrived she was sweetly sitting in her chair comparing water color drawings of the "Old Turtle" books we both love. She put the gardenias in a vase and didn't even seem to notice the bugs so I breathed a sigh of relief. Of course, there is the possibility that since she's studied insects her whole life the bugs made the flowers that much more special. 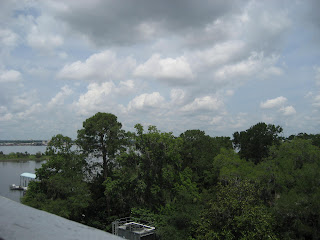 Her apartment is on the 8th floor, pretty high up. We ate lunch on the porch which over looks tree tops and has a kind of sideways view of the river.
[Photo: A view of a thunderstorm brewing.]

It wasn't too hot so dining al fresco was quite pleasant. We ate chicken salad, fruit, and croissants. A simple fare, followed by macaroons. Macaroons ! How oh so yummy!

We chatted about our kids, and traveling, and swimming, and making scones. She tantalized me with talk of butterfly gardens, arboretums and nature paths - all within driving distance. After lunch we looked at pictures of her recent trip to Bryce Canyon and Zion National Park. Let me just say ... I WANT TO GO THERE!!!! 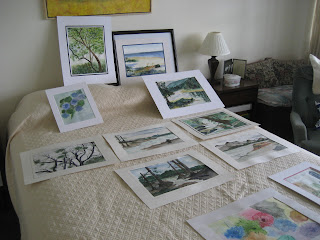 Then it was on to the show. Beth had laid a bunch of her watercolors on the bed so I could see them. All over her apartment are pictures painted by fellow artists and teachers. It was a veritable watercolor showroom.
[Photo: So many too choose from.]

I took my time and looked at every picture. I zeroed in on three favorites right away. One seascape, one of purply-blue hydrangeas and one of a tree. I hemmed and hawed. I liked each picture for different reasons. 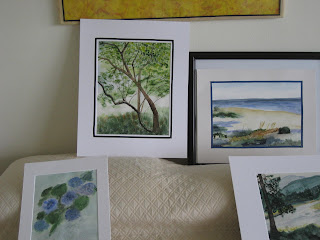 Finally I zeroed in on the tree. [See photo] I have a thing for trees. When I told her which one I wanted, she smiled and said, "that is my favorite." I felt like I'd won the lottery! So it's a done deal. She's going to frame the picture and
bring it to me on Sunday. Christmas in May! How fun is that!

We talked a little more about writing and drawing and poetry. Then it was time to leave. It really was a divine little interlude. I came home thinking I should be about the business of having that tea party I keep talking about. Ladies and flowers and mom's silver tea set. Yup, I'm in the mood for some female companionship.

P.S. I don't know if I mentioned this in an earlier post so I'll just write it again.

A few weeks ago in church, I noticed that Beth was looking particularly happy. She told me she had spent the weekend with a couple of ladies she'd gone to high school with. They'd even had a slumber party and watched old movies. OMG, can't you just picture that? I wish I'd been a fly on the wall!

Oh Merry!
That is a beautiful painting!
And that women has such a beautiful face!
I have always thought that you had one of those sweet southern women faces, The ones that looked out at you from under wide brim hats...
But you look so incredibly happy and just so relaxed and fully present,( if that makes any sense)
Nothing better than the company of a women who inspires you!
LOL
break out the tea and laughter!

i sipped my tea and joined you two in spirit.....was wonderful reading this.....