The Vacation is Over

"There is nothing like returning to a place that remains unchanged
to find the ways in which you yourself have altered.
Nelson Mandela
Dictionary.com defines vacation as "a period of suspension of work, study, or other activity, usually used for rest, recreation, or travel." Clark Griswold (aka Chevy Chase in National Lampoon's 1983 movie Vacation) calls it a "quest for fun."as in "I'm gonna have fun and you're gonna have fun. We're all gonna have so much f*#!*!g fun we'll need plastic surgery to remove our gd smiles." 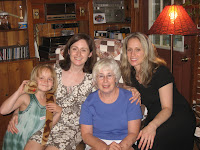 The West coast vacationers who just spent a week here in sunny (except for the late afternoon and middle of the night thunder storms) Florida might not have had much rest or relaxation, but they had plenty of travel. And fun? While I hope they enjoyed themselves, fun is mostly in the eye of the beholder, don't you think?


For the parents of six-year old twins traveling cannot be easy. If it was just the kids it might be a breeze. However, unlike the children 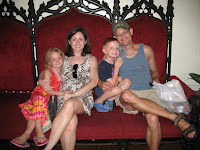 who crossed the country in a covered wagon with a pair of hand-me-down shoes on their feet and a hat to keep the sun off their faces, modern day travel tykes come fully equipped with their own fully-loaded suitcase, backpack, comfort item du jour, and car seat. This basically turns mom and dad into a pair of pack mules before they ever leave their driveway. Returning home is just as loaded, plus it also includes a few souveniers and a bucket's worth of sand! 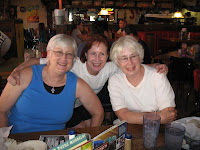 On the other hand, my sister manages to get everything she needs for a week away from home in one pint-sized carry-on bag. She is a packing wizard. Watching her unpack is a little like watching one of those tiny cars in the circus that unloads a bunch of clowns. You gotta wonder how it all fits in. [Photo: The 3 Cheaters reunited!] 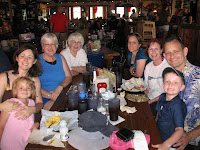 everybody. It's been too long since there were so many conversations going at once that I was afraid I'd miss something.

I remember a time when my mom sat at the head of the table, watching and listening as her family gathered around. I always wondered what was going on behind her quiet, smiling eyes. Now I think I might know. It's a contented, homey feeling. One that I relish. 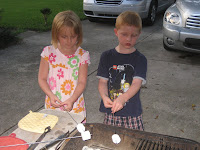 It is a little weird, however, to see how the generations have changed. Mom is no longer here. Dad seemed content to watch the festivities rather then join in and be provacative. My sister and I shared the matriarch position as we watched her daughters and grandchildren take the place of the little ones we remembered. It's deja vuish to say the least.

Even as things change, many things 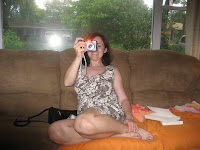 remain the same. For our family a constant barrage of picture taking is always in order. It used to be my father who would arrange everyone on the couch, count to three and demand that everyone, including the children who had made it known that they'd already posed for one too many photos, smile by saying "cheese" or "whiskey"or "booger" of something else that might turn tears into a flash bulb's moment of laughter. 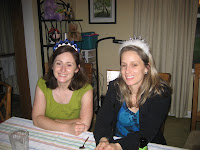 I'm also pretty sure there was enough food for everyone. It seems like every time we turned around we were eating. As with every family get together, the vacationers feasted on lots of homemade comfort food. We also ate an inordinant amount of treats - Little Debbies, S'mores, Carrot cake and ice cream cake.

Around the table, or in the pool or wherever the most people congregated there was all kinds of conversation. When Father/Brother Georges was in the house we even gently touched on Middle Eastern politics and religion, which can be heated subjects in any family . Joe told some classic FBI stories. Michele shared tales from the ER. At the end of every hot day we all fell into our beds tired yet expectant for tomorrow's adventure. 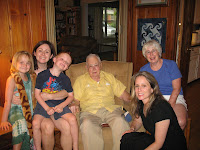 And then, as if in the blink of an eye, it was over. We stood outside the Olive Garden and said out goodbyes. Everyone was leaving early in the morning. The vacation was ending. I might have hugged my sister too tight. My inner child was crying, "please don't go." I looked at my nieces and wondered how long it might be and what changes there would be in their lives before we see each other again. I thought back to the time they were small, when a different generation of cousins vacationed together in this same town. Sometimes the more things change, the more they stay the same. 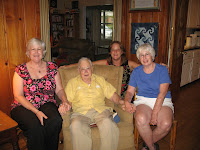 Here's how Sweetie summed it up: "the house on Noble Circle South saw laughter, joy, tears, praise. The family has had one more visit with 'grampy,' and all is well in our respective parts of the country. Sad to see you go; Hoping to see you all again soon."

I know the travelers must have been happy to get home and back to their routine. As soon as they departed I fell into an energy-deprived funk, as if I'd been the one to spend hot summer days at the beach, or the zoo, or St. Augustine. Without the noise and excitement I feel the need to sleep for days on end. Physical or emotional? Probably a combination of the two. But it didn't take long to realize the truth of the saying, "Not having children makes less work—but it makes a quiet house."*

Here's hoping it won't be too long before we are all together again.
Merry ME

P.S. I've tried to fix the spacing but it seems to have a mind of it's own. I give up!