Sweetie and I watched a documentary a few nights ago that I think should be required of everyone who reaches a certain age. The problem might be in deciding what the age should be ... 50. 60. 75?

At 57 I'm on the slippery slope side of middle age, looking straight at being old. Or am? Someone said, and I believe it's true, that old age is a state of mind. The movie, Young at Heart, was pretty much a commentary on the power of not giving into the aches and pains and problems of being old. If you haven't seen it rent it soon.

I've known several people of advanced age in my lifetime. Some embrace their golden years with dignity and humor, other rage against their aches and pains and everyone around them. Some have smiled right up to the end, while others have moaned more out of frustration than anything else. It's got to be hard being old; harder still to fight the inevitable.

My dad's mom, lived to be 96. I didn't see her much at the end of her life . I know she ended up lying in bed in a great deal of pain. Still, when I think of her I remember a woman who loved the little things in life - red birds, dogwood blossoms, a phone call from her son, prayers, and letters from her grandchildren. She was a woman of faith; a woman I'd like to be like.

Dad inherited his longevity from his mom's side of the family. He does act particularly grateful for this genetic gift. Living long is one thing, outliving your spouse and friends is another. I believe Dad would rather look forward to the reunions he'll have in heaven than expend his limited energies in the here and now. I can't say I agree with him, but I'm well aware that I'm not the one walking in his shoes. 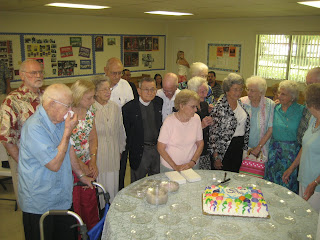 That being said, yesterday I had a glimpse of the young man Dad used to be. The women of the church gave a party in honor of the "Super and Super Sonic Seniors" (congregants in their 80s and 90's). The group of honorees was almost bigger than those doing the honoring. It was quite splendid to look at these people I've known for so long and see them enjoying the celebration.

Besides a birthday cake and the requisite potluck fare - potato salad, carrot salad, cole slaw and a pickle tray - the room was festooned with balloons and banners. Pictures had been collected from when the seniors were juniors. It was great fun to see the the gray headed people we love now with that spark of youth in their eyes, and no wrinkles or pain lines etched in their faces. Another highlight was the karaoke singer. Men and women of a certain age get a little misty eyed when songs like "I left my heart in San Francisco" or "Danny Boy" or some other ditty made famous by "old Blue eyes" are sung by a music loving man with a Filipino accent. 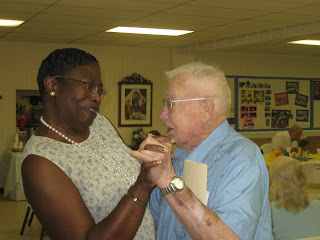 I watched closely to make sure my Dad didn't get too tired. Just about the time I thought he was ready to leave, I was informed he couldn't go until he'd danced with his girlfriend, Deborah. The two had been making eyes at each other all through church, so I sat back and waited for the next slow song to play, uncertain as to how my dad was going to twirl both Deb and his walker around on the dance floor.

I needn't have worried. As the music began to play, about 40 years fell off my father's legs. His standing up was a little shaky but after that he took Miss Deborah in his arms and danced. And sang!

I've been quite pissed off at my father lately. He's stung me with words and cut my already scarred heart open again. But all of that kind of faded away as I watched an old man who happens to be my father smile at a pretty woman who takes the time to pay attention to him. She didn't just fall off a turnip truck. She's cared for old people. She knows Dad is probably an old poot. Still, because she isn't lassoed by dysfunctional family ties, she can gently reach out to the person behind the gruffness in ways that I cannot. I love to see my dad smile. If Deborah can make him feel like smiling even for a few minutes, then it's worth it.

Perhaps that's what struck me most about Young @ Heart. The men and women in the choir had all seen better days. Days with less pain, less fear, more get up and go. In my opinion, the difference between them and other old people who aren't so happy about aging is that they sing songs and keep smiling.

I'm no scientist or doctor of geriatrics. I have no idea why some people live a long time and others don't. I am curious about why some old people embrace each day as it comes and others cuss the dawn. But something tells me, it all has to do with the smile.


My prayer is that even when I am sitting in a rocking chair on the porch of an adult day care center and can't remember my own name, I'll still remember to smile.

May this day and many tomorrows give you reason to smile,
Merry ME

What a truly uplifting and beautiful post, dear Merry Me. How lovely that these seniors have been honoured and attributed with the 'Super and Supersonic' sobriquet they so deserve.

For all the pain your Papa may have caused you, it is wonderful that you are so pleased to see him smile. And, yes...you are right - we should all remember how important it is to look back (and forward) with a smile.

I'm off now to put my 'You Rock' award on my blog ...where I shall look at it every day with pride. Thank you so much - I'm truly touched. xxoo

do you have any idea what a gorgeous heart you have??

THAT's what will get you thru!
im convinced of it!